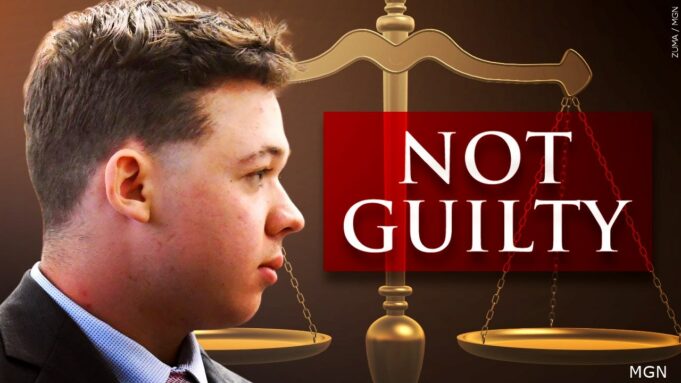 In the aftermath of the controversial acquittal of Kyle Rittenhouse by a jury in Kenosha, Wisconsin, a country already previously divided along political, racial and economic lines is teetering even further toward the brink of total collapse.

The 18-year-old White male was acquitted of all charges Nov. 18 after asserting self-defense in the deadly Kenosha shootings during last summer’s protests that sparked in the aftermath of the police shooting of Jacob Blake Jr., a Black man.

Mr. Rittenhouse began to choke up, fell forward toward the defense table and then hugged one of his attorneys as he heard a court clerk recite “not guilty” five times. A sheriff’s deputy whisked him out a back door.

The Rev. Jesse Jackson, the longtime civil rights leader, said the verdict throws into doubt the safety of people who protest in support of Black Americans. “It seems to me that it’s open season on human rights demonstrators,” he said.

Mr. Rittenhouse was charged with homicide, attempted homicide and reckless endangering for killing two men and wounding a third with an AR-style semi-automatic rifle in the summer of 2020 during a tumultuous night of protests over the shooting of a Black man, Jacob Blake, by a White Kenosha police officer. The officer that shot and wounded Mr. Blake was not charged.

Mr. Rittenhouse killed Joseph Rosenbaum and Anthony Huber and wounded Gaige Grosskreutz. He told the court he shot in self-defense.

Around the country, there were small protests in several cities with people expressing anger and disappointment at the verdict. Kenosha, Wisc. Brooklyn; Portland, Ore.; Chicago; Columbus, Ohio; Oakland; San Diego and Los Angeles all saw demonstrators take to the streets.  Hundreds marched across the Brooklyn Bridge and gathered outside the Barclays Center in Brooklyn and in Portland, police reported there was some damage to a police vehicle and windows on a local business by protesters.

“The jury verdict in the Kyle Rittenhouse case is a terrible miscarriage of justice, a measure of how thoroughly White privilege and supremacy pervade our criminal legal system, and a reminder of the terrible toll that unrelenting systemic racism and the ‘guns everywhere’ culture are taking on our country,” said Kristin Rowe-Finkbeiner, executive director and CEO of MomsRising, the online and on-the-ground organization of more than one million mothers and their families.

“Rittenhouse, a minor at the time, illegally chose to bring a high-powered firearm to a Black Lives Matter protest calling for justice for police-shooting victim Jacob Blake, during a time of unprecedented national mobilizations for civil rights and to end White supremacist violence. Rittenhouse murdered two protestors and wounded a third one when they tried to stop him because, by every measure, Rittenhouse appeared to be an armed and dangerous active shooter. Instead of celebrating the heroism of these individuals for trying to disarm an active shooter, today we are learning that Rittenhouse will not be held accountable. That is a travesty of justice,” continued Ms. Row-Finkbeiner.

“The impact of this verdict will surely be chilling, especially in a country where guns are easily available and police brutality and White vigilantism pose a growing threat. Moms know that our communities will be less safe because of this ruling, that Kyle Rittenhouse committed murder, and that this is not justice,” she added.

“Stark and well documented disparities in our criminal justice system indicate that the outcome of the trial would very likely look different had Rittenhouse been a Black man,” Race Forward, a nonprofit racial justice organization, released in a statement.

Yet to others, Mr. Rittenhouse is being hailed as a hero particularly by right-wing advocates who argue he was merely defending himself against angry protesters. Florida Congressman Matt Gaetz, a Republican, told Newsmax, “He deserves a not guilty verdict, and I sure hope he gets it, because you know what, Kyle Rittenhouse would probably make a pretty good congressional intern,”  reported vice.com.

Following the verdict, Mr. Huber’s family released a statement saying they were “heartbroken and angry” over the acquittal. “Today’s verdict means there is no accountability for the person who murdered our son. It sends the unacceptable message that armed civilians can show up in any town, incite violence, and then use the danger they have created to justify shooting people in the street,” they said.

Dr. Raymond Winbush, a professor at Morgan State University, told The Final Call that he was driving in his car when he heard the verdict. “They said not guilty and they read it five times. I said, why did I even for a second think that he was going to be found guilty?”

Dr. Winbush argued the justice system has always worked for White people and has always been broken for Blacks. “I think right now, even White people are saying this is an unjust verdict,” he said.

Both he and Houston-based attorney Pamela Muhammad said the verdict sends an “ominous” message and a greenlight for people to shoot freely, especially in racialized situations. Atty. Muhammad described the trial and verdict as “bizarre” and “confusing.”

“The way they tried the case was not really reflective of the facts, because the judge disallowed some evidence that gave the true story about the mindset, the true motive of what he was doing. The judge disallowed them from talking about prior incidents,” she observed.

Prior incidents included Mr. Rittenhouse saying he wanted to gun down shoplifters in a CVS store.

In a statement civil rights attorney Benjamin Crump, who represents Jacob Blake, called the verdict an “example of the two justice systems at work.”

“From the outset, this case has pulled back the curtain on the profound cracks in our justice system—from the deep bias routinely and unabashedly displayed by the judge, to the apathy of officers who witnessed Rittenhouse’s crimes and did nothing. If we were talking about a Black man, the conversation and outcome would be starkly different,” he said.

In a statement by the American Civil Liberties Union of Wisconsin, interim executive director Shaadie Ali said, “Kyle Rittenhouse isn’t the only one responsible for the deaths that night. The events in Kenosha stem from the deep roots of White supremacy in our society’s institutions. They underscore that the police do not protect communities of color in the same way they do White people.”

Ms. Ali added that the situation represents the failure of the Kenosha Police Department and the county’s sheriff’s office to protect protesters. “Months of research and open records requests have uncovered many incidents in which police enabled White militia members to become armed vigilantes in the street due to their failure to control the crowd. They also created an environment where protesters, many of whom were people of color, were not protected and treated as the enemy,” she said.

Sadiki Kambon of the Nubian Leadership Circle told The Final Call he wasn’t surprised by the verdict. He said it’s an example for Black people to understand how the world of injustice functions and that justice is applied when those over it feel it’s appropriate.

“I’m really pleased that Minister Farrakhan is in full support of what we’re doing in this Nubian Leadership Circle in trying to form our own Black nation because of the fact that, for me as a grandfather, that’s the only path we can take at this time right now,” he said, referring to the Honorable Minister Louis Farrakhan of the Nation of Islam.

Longtime St. Louis and Ferguson, Missouri activist Anthony Shahid said he knew there would be trouble when he saw Mr. Rittenhouse walk by police during Kenosha protests while armed and nothing happened. He said he was 100 percent clear he was looking at a White male dominated society. He called the verdict a shame and a disgrace.

“It speaks volumes for why the Messenger told us to separate,” he said, referring to the Honorable Elijah Muhammad’s words on separation between Black and White.

“Separation is the only solution,” agreed Atty. Pamela Muhammad.