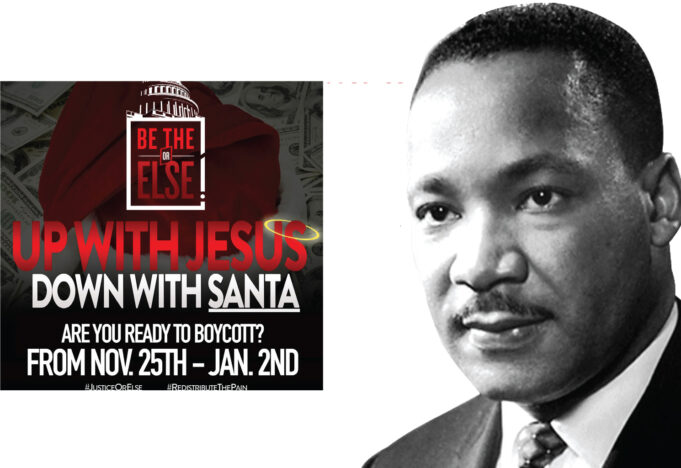 Weeks before the holiday season officially kicked off, major retailers were already advertising big sales. Some projections for this year point to an increase in spending and more crowded stores since the Covid-19 pandemic began.

But while White institutions look to go from the red to the black, many across Black America are heeding the instructions of Nation of Islam Minister Louis Farrakhan given six years ago, to pull our money from White retailers, and support our own.

TransUnion, a credit reporting agency, published a 2021 Retail Shopping Report, which found that 22 percent of consumers plan to spend more this holiday season, after two consecutive years of decline. Last year, fewer holiday shoppers bought gifts during the five-day period from Black Friday to Cyber Monday, and those that did spent less, according to the National Retail Federation.

This is in part because discounts have started earlier over the years, pushing shoppers to begin hitting stores as early as September. TransUnion says the early shopping also has to do with the supply chain issues currently gripping the country. For months, shipping agencies like the United States Postal Service have advised holiday shoppers to ship gifts early, to avoid delays due to the backlog of ships at U.S. ports.

But in truth, Black Friday sales have taken a hit in previous years, largely because of Black dollars. In 2015, Minister Farrakhan launched the “Up With Jesus, Down With Santa” campaign during his Justice Or Else! tour, calling for a boycott of the same institutions that profit off of Black suffering.

“What the Honorable Minister Louis Farrakhan had in mind was putting something in motion that would evolve to another level,” said Dr. Ava Muhammad, national spokesperson for Minister Farrakhan.

“As with any campaign, it was meant to serve as a launching pad for a way of life that we have been taught by the Honorable Elijah Muhammad,” Dr. Muhammad continued. “God desires us to live. And then it is a life where we are obeying the law of God and the divine duty to do something for yourself.”

Minister Farrakhan’s call had a major impact on Black Friday in 2015. According to Amsterdam News, the four-day shopping weekend, which includes Black Friday, saw a 10.4 percent decrease compared with 2014, equaling more than $1 billion in losses.

During Justice Or Else! Minister Farrakhan brought to light words from Dr. Martin Luther King, Jr. He highlighted Dr. King’s April 3, 1968 speech delivered in Memphis a day before he was assassinated.

And we’ve come by here to ask you to make the first item on your agenda fair treatment, where God’s children are concerned. Now, if you are not prepared to do that, we do have an agenda that we must follow. And our agenda calls for withdrawing economic support from you.’ ”

“It is the 40 million to 60 million Black people in this country that are the biggest consumers,” she said. “And so even though we are on the bottom rung of this economy in terms of income and wealth, we manage to eke out for lack of a better term, several trillion dollars every year and we give it right back to the slave masters’ children.

So the Minister is saying listen, as a step, the initial step in our exodus out from under this slave master, slave relationship is to hold on to what we’ve been blessed with and then redirect what we’ve kept into the development of our own economy. So they’re inextricably tied together, economic withdrawal and the separation process,” Dr. Muhammad said.

During the six years since Minister Farrakhan called for the boycott, he, along with the countless others across Black America who have picked up the mantle to push this work, have not only pulled dollars from White institutions, but have also bolstered the growth of Black businesses.

“What we have now is an era of financial consciousness that is growing every single year,” he said. “Black people are looking actively for Black-owned businesses and they‘re thinking carefully about where they‘re spending the money. So yes, everything the Minister has called for has been working, and it’s highly appropriate that we continue to move forward down this path.”

“It‘s not as difficult as it used to be to get Black people to understand the importance of what we do with our money,” Dr. Watkins continued. “Many of the campaigns that the Minister has led and others like him, have been working and taking hold within the community. So now, people understand that supporting Black is very important and keeping our money in our community is part of the lifeblood of what will make our people successful.”

Cassiopeia Uhuru, co-founder and CEO of The Black Mall in Chicago, Ill., is celebrating 10 years of business this year.

“It was like pulling teeth when mentioning Black-owned businesses,” Ms. Uhuru recalled. She explained how people would tense up at the mention of Black businesses and become critical of Black-owned businesses. “Doing this work, staying consistent and then finally seeing the fruits of your labor flourish across the whole world is a beautiful thing,” she said.

“We‘re moving dollars from one location to intentionally put it into our own and year after year, not only has it doubled and tripled and quadrupled … it just keeps going up,” she said.

Another reason the call to support Black businesses continues to grow this year is because of the pandemic.

“The economic impact of the pandemic has devastated minority-owned businesses,” said David Clunie, executive director of Black Economic Alliance. “With many being forced to shutter their doors and shut down their services. During this year’s holiday season, it is more important than ever to find as many ways as possible to support Black-owned businesses.”

One of the greatest surges in support of Black businesses came in 2020 following the deaths of Ahmaud Arbery, a 25-year-old Black man in Glynn County, Ga., who was shot and killed by two White men; George Floyd, a 46-year-old Black man who was murdered by former officer Derek Chauvin while in police custody, in Minneapolis, Minn.

Another major spark was the tragic death of Breonna Taylor, a 26-year-old Black woman who was shot and killed in her Louisville, Ky., home, when police served a no-knock warrant. Later in 2020, Jacob Blake was shot and paralyzed by a White police officer. All of this sparked a massive movement for justice, which prompted a call to support and uplift Black voices, and businesses.

Last year, a partnership between the city of Chicago, the Chicago Urban League and a local advertising agency created “Black Shop Friday,” which was an effort to focus on Black businesses and focus on racial equality. Because of the Black Lives Matter movement and this surge of support, according to Forbes, this allowed some Black business owners to keep their businesses open.

The publication also says according to Yelp, support of Black-owned businesses increased by more than 7,000 percent in just two months last year. Furthermore, in Wilkinson County, Georgia, 19 Black families came together to buy nearly 97 acres of land to create their own community. And on Nov. 12, the New Black Wall Street Market opened in Stonecrest, Ga.

These killings also sparked Caleb Martyr to create The Blackout Coalition in May of 2020, after he saw the video of Ahmaud Arbery’s killing. He launched “Blackout Day,” which called on Black people to only support Black businesses from Nov. 1 to Jan. 1. He’s also calling on people to do the same this year. From the success of Blackout Day 2020, he’s gone on to create I Am We Global, an organization that would include moving legislation to benefit those in the African Diaspora.

“I kind of use the Blackout Coalition in the movement to wake up the spirit of an awareness of supporting Black,” Mr. Martyr said.

But to him, as well as Ms. Uhuru––this movement is not just about supporting Black businesses, but also about the fight for justice.

“Without economics and funds running through our own communities, then we‘re unable to own the media stations that could mess up the narratives out there,” Ms. Uhuru said. “The more we invest, recycle the Black dollar, the more we’re able to then depend upon those retail institutions that we build up to then come back to them and say hey, now it’s time to put money towards education, policy, and media. So if you control the whole thing, you really start seeing a higher quality of life for all of our people in our community.”

As support of Black businesses, the building of Black wealth and finances grows, Dr. Watkins said the future is looking bright.

“Money matters and we’ve always known that and now I see every year Black dollars are being kept in the Black community,” he said. “So I think we have quite a bit to be optimistic about.”