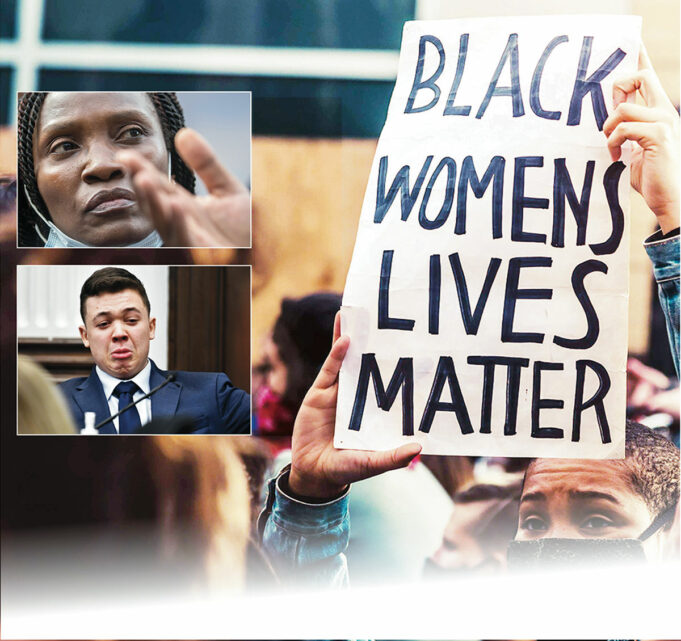 Two trials were held at the same time and captured the hearts and minds of millions. One, the killing of Ahmaud Arbery, a young Black man, was a modern-day lynching as he was hunted, “trapped” and shot to death jogging in a White neighborhood in Georgia.

In Kenosha, Wisc., Kyle Rittenhouse was on trial for killing and shooting White men at a time of racial unrest sparked by a White officer shooting Jacob Blake, Jr., a Black man, in the back and paralyzing him.

At the end of that road, many saw another assertion of the right to kill based on imagined dangers and a devotion to guns and vigilante justice against Blacks and anyone who dared stand with Blacks.

“What’s on trial is the importance of African American life in this country,” said Darren West, a Black pastor with the Living Word Worship Center International in Brunswick, Ga.

Would America render a judgement that affirmed Black lives mattered or would it be another look at failed attempts to obtain justice? Or is it leading to recognition of an undeniable reality and true action to address that reality?

“We are not going to get any justice under this system. This is set up by the enemy and it’s for the enemy,” he said in reference to the White ruling class.

The jury in both cases were majority White, with one Black juror in the Arbery case. Judge Timothy Walmsey, presiding over the Arbery case, admitted that it appeared to be intentional discrimination in jury selection but that the court would move forward.

Civil rights attorney Benjamin Crump spoke on the similarities of the two cases, with videos of killers and unarmed people.

“And that has to say something about our system of justice, where we’re at in America today. You cannot allow people to hunt down individuals with shotguns and assault rifles, and then there be no accountability,” he said to Democracy Now.

He said it seems to be a challenge to convict White men who shoot unarmed people.

The Rittenhouse murder trial had closing arguments as The Final Call went to press Nov. 15. The defense said the rifle carrying teen feared for his life. Then 17, he killed two men and wounded a third during a tumultuous night of protests against racial injustice in the summer of 2020.

The men who engaged with Mr. Rittenhouse were the aggressors, countered the defense.

Prosecutors argued Mr. Rittenhouse left his home in nearby Antioch, Illinois, and inserted himself into protests in Kenosha. He was carrying an illegal weapon but the trial judge decided Nov. 15 to drop a weapons charge, which was seen as favorable to the young White male.

One CNN analyst said she understood a caveat in Wisconsin law about the length of guns that allowed for the dismissal. But, she added, Blacks and Hispanics are locked up daily and serve long sentences for possessing illegal weapons.

Mr. Rittenhouse, now 18, faces a mandatory sentence of life in prison if convicted of the most serious charge against him, first-degree intentional homicide, which is Wisconsin’s top murder charge.

The prosecutor disputed the defense notion that one of the victims was trying to grab the rifle. He rejected the contention Mr. Rittenhouse had no choice but to shoot, saying he could have run away.

After killing Joseph Rosenbaum, Mr. Rittenhouse shot and killed Anthony Huber, 26, and wounded Gaige Grosskreutz, 28, while trying to make his way through a crowd.

When it was all over, Mr. Rittenhouse walked away like a “hero in a Western—without a care in the world for anything he’s just done,” a prosecutor said.

Atty. Richards said Mr. Rittenhouse was attacked by a “mob.”

A prosecutor called Mr. Rittenhouse and others like him were “wannabe soldiers” and “chaos tourists” drawn to the unrest in Kenosha.

Prior to the closing arguments, analysts called the judge’s instructions to the jury confusing and one Black attorney said a conviction was not a forgone conclusion.

After closing arguments, names were to be drawn to determine which 12 of the 18 jurors who heard testimony would deliberate, with the rest dismissed as alternates.

With a verdict near, Gov. Tony Evers said that 500 National Guard members would be prepared for duty in Kenosha if local law enforcement requested them.

Wisconsin is an open-carry state. Minors are not allowed to carry weapons in public except in instances of hunting.

From the start of the trial, some argued prosecutor Binger made mistake after mistake. His key witnesses provided testimony that seemed to work against the prosecution’s case. According to many analysts, it appeared that every single prosecution witness gave equally as potent ammunition for the defense.

A case in point was the prosecution’s star witness Gaige Grosskreutz’s, whose testimony was very damaging. He was the only person who survived being shot by Mr. Rittenhouse. Defense lawyers cut him to shreds, pointing out numerous inconsistencies in his testimony. He admitted he was carrying his pistol that night despite an expired permit and pointing the gun at Mr. Rittenhouse before being shot.

At one point, Mr. Rittenhouse broke down crying absent tears. Many thought he was well-rehearsed.

The trial touched upon hot-button issues of race and gun rights, with Mr. Rittenhouse a hero among many Whites, who contributed thousands to his defense fund. In conservative circles, those who favor gun rights say the shootings are justified given the “chaos” in Kenosha.

During the trial and pretrial proceedings, Judge Bruce Schroeder ruled that prosecutors could not refer to Mr. Rosenbaum, Mr. Huber, and Mr. Grosskreutz as “victims” and that defense attorneys could call them “looters” or “arsonists.” More than 30 witnesses testified in the trial.

The Rev. Al Sharpton commented on the majority-White jury in Mr. Arbery’s case as the city of Brunswick is 55 percent Black, and Glynn County is 26 percent Black, according to Census figures. Mr. Arbery’s family invited the reverend to the city and he came to court Nov. 10. Defense attorney Kevin Gough called his presence “intimidating” and an “attempt to pressure … or influence the jury.”

You will never find a Black person saying something like that about White preachers, Mr. Muhammad said. He also commented on the treatment of Kyle Rittenhouse compared to how Blacks are treated.

“It’s just evident that we are going to have to separate from these people and build our Nation of our own, bottom line,” Mr. Muhammad said.

He said the enemy, or White people, are going to assure Black people that they do not want them.

“They don’t want us to have nothing. Nothing. So we can stick around here begging them for crumbs if we want to,” he said. “We better go and do something for ourselves.”

The defense contends Travis McMichael shot Mr. Arbery in self-defense. They argued the men were within their rights—but making a citizen’s arrest under Georgia law has since been repealed. The defendants are charged with malice and felony murder. They also face charges of aggravated assault, false imprisonment, and criminal attempt to commit false imprisonment. All pleaded not guilty.

Prosecutor Linda Dunikoski established the defendants had no legal right to arrest Mr. Arbery. They never observed him committing a crime, much less a felony offense required under the citizen’s arrest law.

Speaking outside the courtroom, Atty. Crump, representing Mr. Arbery’s father Marcus Arbery, said, “While jurors are told to follow the evidence and the law as instructed by the court, they are told they can use their life experiences and perspectives,” he said.

“When they do that, do they understand the life experiences of Ahmaud? His background? His culture?” Mr. Crump asked. “Or will they be more akin to the perspective and background of the killers of Ahmaud Arbery? It is concerning, and we have to call out this intellectual justification of discrimination of our entire legal system.”

“In general, the jury pool makes a big difference, and that’s what concerns me in the trial of Mr. Arbery. The racist overtones of the residents there can be seen through the lens of the police department who were not willing to make an immediate arrest,” Philadelphia-based defense attorney Robert Muhammad said.

“In the Rittenhouse trial, what concerns me is the judge and some of the rulings he has made. He appears biased. I also don’t know what the prosecutor is doing in presenting his case. The judge told the prosecutor earlier in advance pretrial motions not to approach certain issues, and he did so. It’s almost like him falling on his dagger,” he said.

“I always remind my clients that the Honorable Elijah Muhammad said don’t expect to get justice in this White man’s judicial court system. I tell my clients that we have to, by any legal means, steal some justice. What we are witnessing in these cases is justice American style,” attorney Muhammad concluded.

And justice American style has never meant guaranteed justice for Black people. Divine justice, however, is another matter. The Honorable Elijah Muhammad, Eternal Leader of the Nation of Islam, and his top student, the Honorable Minister Louis Farrakhan have declared that Allah (God) Himself would give justice to Blacks and indigenous people and destroy Whites for their evil just as the scriptures describe the punishment and destruction of past evil doers. Whether America gives us justice or not, we will get justice and evil will not go unpunished.

(The Associated Press contributed to this report.)