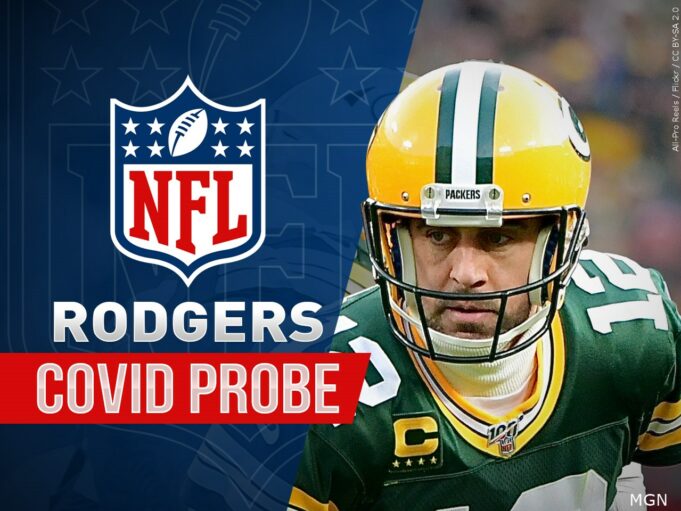 “The Satanic Mind and The Satanic Forces—they are not going to change! They are going to use their wicked influence to keep you going the way you are going. It’s going to take great strength and power and resolve in the American people to resist Satan, for the Bible teaches ‘Resist the devil and he will flee from you…’ We must start now.” —The Honorable Minister Louis Farrakhan, The Time and What Must Be Done, Part 2

Green Bay Packers quarterback Aaron Rodgers is headed for the Hall of Fame, but not because of his Super Bowl championship or because he was chosen three times as the league’s Most Valuable Player (currently reigning). Recently, he went far beyond those prodigious awards to place himself on another level altogether. In the face of one of the worst atrocities the world has ever confronted (and there have been many) Aaron Rodgers chose to stand up to the world’s most diabolical sociopaths in refusing the government’s poison COVID shot.

According to reports, Aaron Rodgers contracted “COVID-19,” which then made him subject to the NFL’s nonsensical and repressive “protocols,” including “quarantining” and daily shaming. Even fully vaccinated players are required to undergo testing once a week. It is bewildering that none of them object to this abuse. Rodgers said that because he is unvaccinated, he is required to undergo COVID testing every day, while the vaccinated players do not have to, despite their ability still to contract and transmit the “virus.”

“I tested over 300 times before finally testing positive [and] it was probably from a vaccinated individual,” Rodgers said. “Some of the rules to me are not based in science at all …They’re based purely in trying to out and shame people … Bodily autonomy is a right, and…. [e]verybody has their own story…and their own reasons for doing things. But this shaming cancel society is wrong.”

He missed playing in Green Bay’s November 7 game against the Chiefs and gave the depopulation police and tin-hat physicians a full week to spew their hatred and bludgeon any would-be dissenters into full vaccine submission. Rodgers spoke about his own personal health choices on SiriusXM’s Pat McAfee Show, where his unflinching comments about the “vaccine” mandate policy were roundly criticized as “spreading misinformation,” “ignorance,” and even “dangerous.”

Rodgers said, “I’m not an anti-vax, flat-earther. I have an allergy to an ingredient that’s in the mRNA vaccines. I found a long-term immunization protocol to protect myself and I’m very proud of the research that went into that.”

Rodgers’ response was not so much “anti-vax” as it was anti-guinea pig, or more accurately, anti-beagle experimentation—Fauci’s preferred experimental subject after African children. But Rodgers, like most sane people, is indeed an “anti-vaxxer.” Webster’s is very clear on this point: “an anti-vaxxer is a person who opposes the use of vaccines or regulations mandating vaccination.”

And as Dr. Michael Doshi, a senior editor of the British Medical Journal—a man with slightly more potent medical credentials than Rodgers’ prominent critics like Michael Strahan, Terry Bradshaw, or Kareem Abdul-Jabbar—pointed out: “There are entire countries from the United Kingdom to Japan which do not mandate childhood vaccines,” he said. “There are no mandates, and I would wager that perhaps a majority of the world’s population meet this definition of an anti-vaxxer.” In fact, most European countries—16 out of 28—do not have mandatory vaccination.

Aaron Rodgers said, “I believe strongly in bodily autonomy and the ability to make choices for your body, not to have to acquiesce to some ‘woke’ culture or crazed group of individuals who say you have to do something. Health is not a one size fits all for everybody, and for me it involved a lot of study in the offseason … That is what the media has been trying to do, they’re trying to shame and out and cancel all of us non-vaccinated people, call us selfish,” he continued. “I mean that’s the propaganda line too now: You’re selfish for making a decision that’s in the best interest of your body.”

Rodgers said he had been immunized, and again the ig’nant Pharma imps pounced. Rodgers cited his preventative health protocols that build natural immunity—a far, far better defense than the poison swill of Pfizer, J&J, and Moderna. Rodgers has powerful backing for that approach.

Dr. Martin Kulldorff, a Harvard epidemiologist, and Stanford’s Dr. Jay Bhattacharya cited an Israeli study that concluded the vaccinated were 27 times more likely to get symptomatic COVID than the unvaccinated who had recovered from a prior infection and thus have natural immunity. Citing the same Israeli study, Rodgers said quite accurately, “There’s a lot to natural immunity, and natural immunity has not been a part of the conversation … I’m going to have the best immunity possible now.”

As if to emphasize the point, Rodgers felt only mild symptoms from the “deadly virus”—never needing hospitalization or even a doctor’s visit. He returned to lead the Packers to a shut-out victory over the Seahawks. Meanwhile a fully vaccinated Minnesota Vikings player was hospitalized because of yet another one of thousands of COVID “vaccine” failures, forcing the rest of the vaccinated team to undergo constant testing under NFL rules. Head coach Mike Zimmer said, “It’s serious stuff.”

Allergies are also “serious stuff,” and Rodgers’ claim to be allergic “to an ingredient that’s in the mRNA vaccines” is a concern wisely shared by millions about the untested COVID serums from the three profit-hungry Big Pharma laboratories. The Centers for Disease Control has now charted more than 800,000 reports of adverse reaction to the forced “vaccines,” including more than 18,000 vaccine deaths and 89,000 hospitalizations—for the “fully vaccinated”!

It was just announced that the 99% vaccinated University of California football team had to cancel their latest game because “44 students and staff” have COVID-19—a vaccine failure on a massive scale! It’s the first major-college football game in the country postponed because of a COVID outbreak. The popular weekly news program The Highwire collected 75 recent reports of young athletes who suffered heart attacks since the “vaccine” mandates, many of them during games, and several of these shocking incidents were caught on film.

This is an age group that has a 99.986% infection survival rate—having virtually no chance of dying from the alleged “COVID virus.” And all these reported tragedies involving young healthy athletes happened in the wake of the spread of the killer “vaccines,” which the government acknowledges causes blood clots and heart damage. Rodgers decried the vaccine-mad culture that has blitzed every sector of society as well as professional sports:

“Personal health decisions, in my opinion, should be private,” Rodgers said. “And they shouldn’t be…over-scrutinized by people who are only pushing their own propaganda … For the media out there taking shots at me, you don’t know my story. Now you do. So quit lying about me,” Rodgers said.

The fully recovered and naturally immune QB told Pat McAfee he has concerns about potential fertility issues had he taken one of the deadly stabs, echoing three of the most knowledgeable scientists in the field. He could not have been more correct.

Dr. Roger Hodkinson, considered one of the world’s leading virologists, was quite blunt about the devastating effects the COVID “vaccine” is having on the reproductive organs of both males and females. “There is also potential for a hit on the testes, which of course is not a one-time hit, it could be a permanent hit.”

Dr. Judy Mikovits, a Ph.D. in biochemistry and molecular biology, warned early on that the “vaccine” could interfere in the development of a woman’s placenta. “You will sterilize healthy young women who get this vaccine,” she told the Final Call last year.

The former Pfizer head of respiratory research, Dr. Michael Yeadon, warned that the “vaccine” as formulated has the potential to cause “infertility of indefinite duration” in vaccinated women.

As of now the CDC has reports of more than 2,700 miscarriages due to the “vaccine,” and that same CDC is estimating that there will be close to 300,000 fewer births than expected in the U.S. in 2021.

Amidst the Pharma-owned media onslaught, Aaron Rodgers appeared calm, thoughtful and resolute about the natural health course he has chosen. And his stand represents yet another stunning defeat for President Joe Biden and his extremely unpopular depopulation drug policies. Vice President Kamala Harris—an obedient Big Pharma cheerleader—now has a lower popularity rating after her first 10 months than any of the last four VPs ever had. Her boss, Joe Biden, need only turn his TV to any football game or NASCAR race to hear crowds of 100 thousand-plus unified in chants of “F&%# Joe Biden!”

Rodgers took aim at Biden and one of the president’s most bizarre COVID claims: “This idea that it’s a pandemic of the unvaccinated, it’s a just a total lie,” Rodgers said before refuting the falsehood. “If the vaccine is so great, then how come people are still getting COVID and spreading COVID and unfortunately dying from COVID? If the vaccine is so safe, then how come the manufacturers of the vaccine have full immunity [from lawsuits]?” The idea that “unvaccinated people are the most dangerous people in society” is the media’s “propaganda narrative … There’s a lot we still don’t know about the shot.”

He continued unfazed, saying that it’s “wrong and reckless” to market it as a cure-all. “If this is really about health instead of politics, why haven’t any of the health experts been talking about diet, exercise, or vitamins? … It’s a virus of health, and the most important thing would be educating people on how to live a healthier life,” Rodgers said. Here Rodgers is referring to the significance of the diet advice in The Messenger’s landmark book How To Eat To Live and is pointing to the critical importance of Vitamin D and Vitamin C and Zinc, which we now know are significant factors in preventing COVID-19.

It is highly unlikely that anyone would have predicted that Aaron Rodgers would become a national spokesperson against medical insanity. But with Big Pharma’s brutal assaults on any scientist questioning the vaccine-crazed depopulation agenda, a voice of courage and reason had to emerge from popular culture. Another courageous NFL quarterback by the name of Colin Kaepernick stepped out of the world of sport and play and kneeled his way into international prominence when he very publicly confronted violent racism and police brutality.

Colin Kaepernick like Muhammad Ali represents far more than passing yardage or heavyweight championships—and that is what men like Kyrie Irving and Aaron Rodgers are destined for today. Their refusal to silently become lab rats in this global human-elimination plot has doubtless saved thousands from their own destruction.