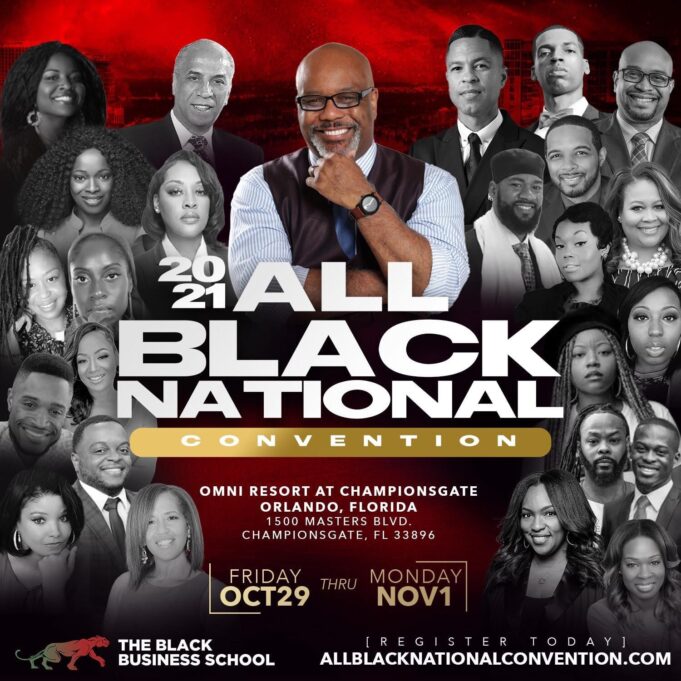 Attracting attendees from across the United States and the Caribbean, social media personality, Black business advocate, and finance scholar Dr. Boyce Watkins recently hosted his Sixth Annual All Black National Convention, in Orlando, Fla., to promote unity, entrepreneurship, and financial independence as a means to inspire the transformation of Black America’s consumer culture into a culture oriented toward producing.

From the current state of hip hop to issues surrounding health and wellness, land acquisition, and other innovative forms of wealth creation, panelists put forward ideas, plans and methods to elevate the #B1 (Black first) hashtag from moments of discussions and presentations to a movement of empowerment through self-help.

Dedicated to the elevation of family, community, and other interests effecting Black people, the four day event, hosted by The Black Business School and its network of supporters, presented alternative solutions to the narratives of non-economic liberalism in contemporary Black America.

Dr. Watkins said during the sold out convention, Oct. 29 through Nov. 1, at the Omni Orlando Champions Gate resort. “Make sure you are very intentional about why you came here because what you are doing at home is extremely important. There is no system more important than the system you are creating in your home every day.”

Identifying cultural factors as one of the driving forces influencing perceptions within and about Black communities across the country, one of a Saturday panel discussions, “The Corporatized Weaponization of Hip Hop,” moderated by Jay Ortiz, included Madame Prezident, Dee-1, Sam Ant & O’God of the podcast Hip-Hop Uncensored, and artist Akilah Nehanda.

Rapper and hip hop artist Dee-1 said messages that promote Black interests can be found on different online music platforms during the panel’s question and answer period. “Peer-to-peer sharing is the most powerful form of music being spread in this world, so make sure to pass it on to your co-workers, or your son,” the New Orleans-based music artist said. “The change is that simple,” he said of boosting pro-Black music such as his own.

Speaking on personal accountability in the entertainment industry, and the effect of repetitive messages through music, Akilah Nehanda said an unrealistic yet manufactured image of the hip hop lifestyle is not only harmful, but also deceptive in its attempt to create a brand image.

“Naturally, our minds are made to be righteous, and when you are doing something completely opposite just for money, and you’re exploiting yourself, you don’t enjoy that,” she said during the panel discussion.

Rappers who have influence and promote things like drinking when they don’t drink have a negative impact on young people, she added.

As Saturday’s presentations continued, various other panel discussions and break-out sessions included diverse subjects ranging from the conflict between Black men and women, how to build wealth, becoming future millionaires, and examples of gaining freedom through acquiring cash flowing assets.

The Oct. 30 line-up of panels covered diverse subjects, from conflict between Black men and women, to how to take advantage of opportunities to become future millionaires to examples of economic freedom through asset ownership.

“Just like you’ve got a printer at your house, the government is just printing money. And every time they print more money, what does it do to the value of the money you have? It goes down,” said Jullien Gordon, a business coach, author, and advocate of owning multi-family real estate. “Cash is the lowest yielding asset in the entire world, yet that’s what you’ve been taught to do, you’ve been taught to paper chase.

In fact, it is the only ‘asset’ that loses value every single year you don’t use it,” he said. “It will take you 2,400 years to double your money in a saving account, you cannot save your way to wealth. With how much money they printed during Covid, inflation is going to be anywhere between eight to ten percent. They’ll never say it, (but) what that means is that your one dollar that was in your saving account over the past year will literally be worth .90 cents worth of buying power, so we have to find how to acquire income producing assets,” Mr. Gordon proclaimed.

“There are two things that come to mind,” Dr. Alicia Watkins, who is married to Boyce Watkins, stated in her opening remarks regarding strife in the home. “I feel like society has declared war on Black men and women (and) all of the pressure and the stress that you’re under and trying to make it in school and at work, it carries with you. When you step your foot back in your house, external experiences are what makes it kind of complex for Black people in general,” she said.

Adding that childhood trauma colors perceptions in adulthood, Dr. Alicia Watkins said internal personal baggage ill effects all parties. “Think about a little girl who grew up in a healthy household where she had nice, warm, loving parents. When she grows up, she’s going to have a very good relationship with the opposite sex.

But if you think about that same little girl whose father wasn’t in the home and maybe she saw her mother have all of these relationships with different men, and it didn’t turn out quite right, she will have a perception of relationships instilled in her that there is a war going on when she gets older,” Dr. Alicia Watkins said.

Agreeing there is a form of warfare between Black men and women undermining Black households, and by extension Black community stability, Student Minister Muhammad said the conflict originated in the systematic destruction of Black male-female relationships over the last 400 years. Enslavement and the subsequent legacy of a hostile society not only discouraged positive relationships between Black men and women, he said, but it also opposes development of positive relationships and prevents healing today.

“As Dr. Boyce (Watkins) said in his intro, the power base of our health, our economics, and our success as a community is a strong family,” Nuri Muhammad said. “Not behind every strong man is a strong woman, but beside every strong Black man has always been a strong Black woman. There is something in that ‘Willie Lynch’ slave-making system that deals with how they broke us,” he said.

Between the panels, break-out sessions and social events, the convention featured presentations on Black Health; the politics of the Covid vaccine mandate by Rizza Islam of the Nation of Islam; disaster preparedness; the Ladies of Fly Nubian Queens; Black political power; the homeschooling movement; the Black athlete; getting off the corporate plantation; and a powerful demonstration of spiritual healing by health and wellness icon Queen Afua.

On the panel covering “Pandemic Politics,” Rizza Islam said there is more to the Covid-19 pandemic and the subsequent rush to vaccinate Black people than meets the eye. The sudden concern for the health of Black people is dubious at best, and behind the shadows of it all is a hidden depopulation agenda that can only be classified as genocide, he warned.

After her address to conference participants, Fly Nubian Queens personality and online talk show host Vicki Dillard, told The Final Call her presentation to the convention included use of the term “Ultra Black,” which came from a song by rapper Nas. The term not only referred to the many subjects covered over the weekend, but also to promote the “B1” philosophy where Blacks as a people must view their interests and concerns as their top priority, she explained.

“In terms of the B1 concept, I’m very clear that I’m unapologetically Black and Black first in all that I do. It doesn’t mean that I don’t care about other groups of people, it does not mean they’re not important, but I always make the case that the difference between us is 500 years,” Ms. Dillard said.

“The difference between us is that we’ve been in a long line for justice, for longer than anyone else without having been repaired, and we’re still dealing with different levels of oppression. When you’re really a servant to your people, people that tend to be engaged with the grassroots, with the voiceless, and maintain a connection to the root, you’re less likely to be pulled by those other forces,” she said of external forces that often coopt Black-oriented movements.

Following an intense series of knowledge-packed presentations for convention attendees to consider, holistic health practitioner and wellness coach Queen Afua, delivered a Sunday keynote address encouraging her audience to participate in an exercise of mindfulness and healing to develop a sisterhood among the women, a brotherhood among the men, and a spirit of family among all involved.

“Brothers, when you support us like you’re doing, you’re supporting a whole family. It’s like a family reunion time, and you’re not going to separate, this is not a workshop, a class, or a seminar,” she said Oct. 31. “This is our life!”

Closing the weekend with plans to hold the Seventh All Black National Convention in a different city, and to continue spreading the Black First philosophy as an instrument of self-help, Dr. Boyce Watkins asked his audience to provide suggestions and feedback as to how to widen its appeal and to seek the qualified skillsets of Black professionals, experts and activists who first and foremost share the desire to elevate Black America’s collective condition.

“I am not a leader, I am an advisor that is here to train you or support your training in you becoming a leader in your life and in your sphere of influence,” said Dr. Watkins, an economist, entrepreneur and popular talk show host. “I want you to understand not just the importance of what you are trying to do, but I want you to also intentionally consume the knowledge and information and the motivation necessary for you to gain the confidence and the self-worth and the values to see the wealth that is in front of you.”