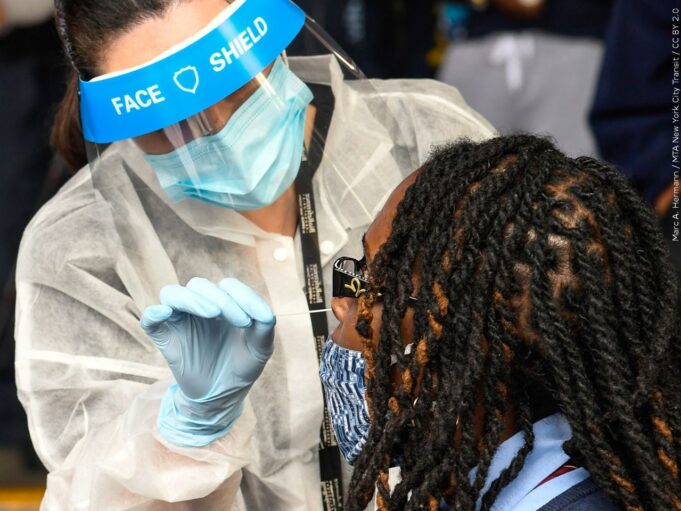 “What has been known as America is threatened today with total destruction. America is destroying herself in her effort to destroy her Black slave. The water and air of America are being polluted by chemico-bacteriologists. America’s scientists of war conduct dreadful experiments on how to kill human beings by the millions and wipe out the life of whole continents. These are the days of fulfillment of prophecy of not one, but of many calamities. But in all of these preparations of destruction of human life by the devil…Allah (God) too has plans to save His people.”

The Honorable Elijah Muhammad, The Fall of America

In the midst of a “pandemic,” Americans are projected to spend $8 billion celebrating Halloween. This is a morbid, spooky holiday which promotes violent acts of murder and deception in the form of masks and costumes. What better time than now to take a deeper look into how far the enemy will go to remove the indigenous people (and many white people) from this planet If you think that the vaccine is the lone instrument of death, you do not fully comprehend the Honorable Minister Louis Farrakhan’s relentless warning: The United States’ Policy of Depopulation, which is global in its reach.

Are we to believe that the enemy is killing us with the vaccine yet simultaneously trying to save our lives with the policies and illegal mandates that accompany the vaccine?

In a September 19th letter written to Alabama’s Governor Ivey, a coalition of physicians, health organizations and elected officials asked that he take action leading to the prohibition of vaccine mandates. One of the issues raised in the letter concerned the very dangerous lie being propagated by the NIH and the CDC that “natural immunity is insufficient to prevent Covid recovered patients from getting the infection again.” The doctors wrote:

“The basis for this claim is that there are cases of people who have previously been ‘diagnosed’ with Covid who have gotten sick again with Covid. The truth is they did not have Covid the first time. When the previous diagnoses were made, 40 cycle PCR tests were used to make the diagnosis.

However, the data shows that any PCR test that uses more than 35 cycles only grows a virus 3% of the time. That means that the previous diagnosis of Covid was wrong 97% of the time. These individuals did not have Covid-19 the first time and therefore they are not reinfections. They simply had another virus, such as influenza.”

In August of this year, the infamous U.S. Food and Drug Administration (FDA) openly states that the PCR test, previously touted as the gold standard for identifying the presence of Covid-19, was not developed with actual samples of the virus. Instead, genetic material from a common cold virus was used. Neither Covid-19 nor any of its ‘variant’ forms has been isolated.

The FDA used regular cold/flu viruses to produce PCR tests—meaning, everyone who tests “positive” for Covid-19 is actually testing positive for the cold or flu. This explains why the flu nearly disappeared in 2020, as everyone who got infected was assigned a “covid” diagnosis. The bottom line is that there is no legitimate test that accurately identifies the presence of Covid-19.

In the FDA document, the U.S. Government, which has a policy of depopulation, clearly states that ordinary seasonal flu genetic material was used as the testing marker in the PCR kits because the government knew that many people would test positive, giving the statistics needed to create the fear and panic that would drive the majority to the vaccine. Here is an excerpt:

“Since no quantified virus isolates of the 2019-nCoV were available for CDC use at the time the test was developed and this study conducted, assays designed for the detection of 2019-nCoV RNA were tested…”.

In its Instructions for Use the CDC Division of Viral Diseases states: “Results are for the identification of SARS-CoV-2 RNA. Positive results are indicative of active infection but do not rule out bacterial infection or co-infection with other viruses. The agent detected may not be the definite cause of disease.

Laboratories within the United States and its territories are required to report all results to the appropriate public health authorities. Negative results do not preclude SARS-CoV-2 infection. Negative results must be combined with clinical observations, patient history and epidemiological information.”

Another revelation is that test results are ‘pooled’ together to produce numbers. This is why the tests became commonly referred to as PIC (Pneumonia, Influenza, CoVid), because they picked up all three. Thus, the test is inherently fraudulent. Now that millions of cases have been manufactured through testing, the FDA is withdrawing Emergency Use Authorization for the PCR Diagnostic Panel and it terminates December 31, 2021.

Why, then, are millions of people, vaccinated and unvaccinated, required to be tested over and over and over again? Beyond the manufactured case numbers, the test itself is deadly. The cotton-tipped swabs are all sterilized with ethylene oxide, a cancer-causing substance. Go to cancer.gov.

According to the same U.S. government that is forcing the vaccine on everyone, including children (who have virtually zero chance of getting Covid-19), ethylene oxide is a colorless gas used to produce other chemicals, such as antifreeze. It is also used as a pesticide and a sterilizing agent. It has a strong ability to damage DNA which makes it a great sterilizer and a great source for cancer.

The best, primary route to get this substance into your body is through inhalation. The site specifically states: “The general population may also be exposed through tobacco smoke and the use of products that have been sterilized with ethylene oxide..” Yes. The cotton swab fraudently testing you for covid is leaving its calling card: Cancer. Are the tests and the vaccines the reason cancer cases are surging? Is this why there are so many commercials now blaming the public for the surge because people obeyed the government and stayed home and didn’t get their cancer screenings?

Finally, Biotech analyst, former Pfizer employee and whistleblower, Karen Kingston is publicly accusing the U.S. Government with using the PCR tests to steal our genome data and use it to replace the current human population with more subservient beings.

Those from among us who were educated in white institutions and who have advanced the vaccines have repeatedly said we should rely on “the science.” What is the science they are referring to? When white physicians first traveled from Europe to China in the late 16th century, the Chinese could see right away that these people knew next to nothing about the source of good health and wellness or the methods to prevent illness.

They were taken aback by the Europeans’ reliance on studying corpses to understand the human body. The Chinese philosopher-physicians had training in ancient and sophisticated methods that relied upon nature. They concluded that this practice of just observing the static anatomy of dead people contradicted their practice of focusing on the living. They regarded western medicine as the Science of Death.