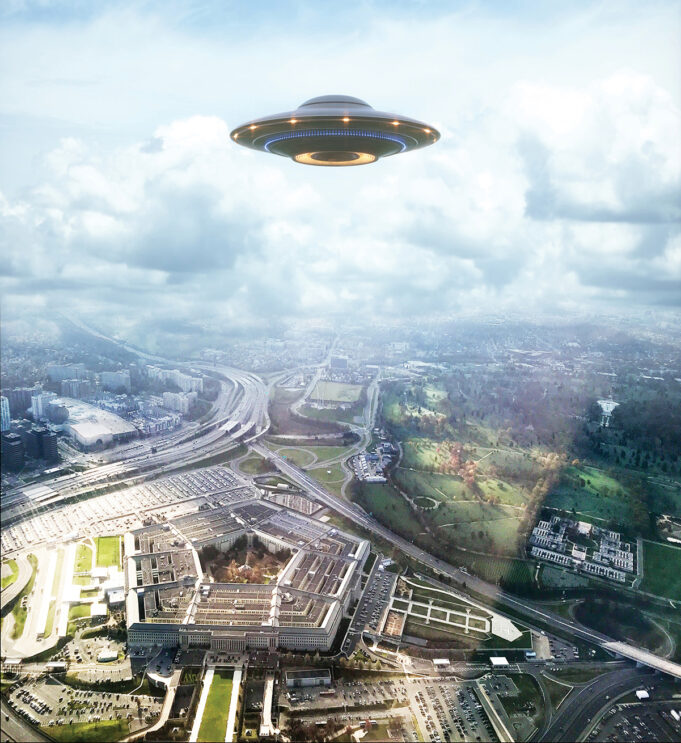 WASHINGTON—Several Air Force veterans revealed their fears for America’s security during a recent press conference here at the National Press Club. Their anxiety, kept secret for decades, was driven by the existence of and the threat posed by Unidentified Aerial Phenomenon (UAP) commonly called UFOs, and threats they experienced during their careers or saw with their own eyes.

Some shared how they saw UAPs soar through the sky and neutralize America’s nuclear weapons. Others experienced weapons systems taken offline as these crafts visited important military sites. Each of them was told by higher-ups to never speak about what they saw or went through. Finally, they have come forward to share their belief their country could be in danger and it’s time for the truth to come out.

“We are not alone,” said Dr. Robert Jacobs, former first lieutenant in the United States Air Force. “Their science can annihilate us, and we need to get Congress to listen.”

He detailed how on September 14, 1964, he was sent to the Big Sur in California to photograph early U.S. nuclear test missiles with high-speed instrumentation.

“We were testing to see if we could launch a nuclear warhead into orbit, slightly above the nuclear chaff, so the Russians would aim their anti-missile missiles at the chaff, and our little warhead would fly over and obliterate Moscow,” said Dr. Jacobs.

What he filmed amazed him. What shocked him more was his superior’s response. Testifying at the National Press Club on Oct. 19 via video link from Missouri, he said, “I was part of a U.S. Air Force cover-up. It was shaped like a flying saucer and was firing a beam of light at our warhead.”

Dr. Jacobs explained that while filming, he saw an object following the test missile, which was traveling at 8,000 mph. It got close and fired four beams of light at the nuclear warhead.

“Then it flew out of the frame the same way it had come in. At that point, the warhead tumbled out of space,” said Dr. Jacobs, now a Bradley University professor.

The next day after submitting his film he was called to the office of Major Florenze J. Mansmann, which included men whom Dr. Jacobs believes were members of the CIA, to explain what he shot.

It was during that meeting that Dr. Jacobs was told never to discuss what he saw and if he did, it would be a security breach. Dr. Jacobs said the major told him, “You are never to say that again. As far as you’re concerned that never happened.”

“What we are here today is to tell you, this is a real event, that it is the most important event in the history of mankind,” Dr. Jacobs said.

He stayed quiet, he followed orders but hiding the truth bothered him.  He knew what he saw. He knew others needed to know what was out there and the UFOs’ abilities to disable U.S. nuclear missiles.

Dr. Jacobs was so concerned that he tried getting his story published.  The only buyer was the National Enquirer which significantly diminished the value of his story. After it was published, he received death threats and he lost his job. Dr. Jacobs told the audience a paid CIA agent wrote a letter to the university where he worked citing the article as “quackery.”

What he didn’t know at the time was that there were others in the Air Force who also witnessed UFOs. Three former Air Force captains also spoke at the press conference, sharing their frightening experiences with UAP and how these crafts had disarmed nuclear weapons with ease.​ The group is calling for a congressional investigation and public hearings about their reports that UFOs have disabled nuclear weapons.

Former Air Force Capt. Robert Salas, now of the Paradigm Research Group, organized the press conference. He opened by stating, “We are all witnesses.”

“We’re not trying to prove anything. … It’s simply relaying the information that we have, the truth as we know it and those facts as we know them.”

His experience with a UFO was in March 1967 while an on-duty commander of an underground launch control facility at Malmstrom Air Force Base in Montana. Mr. Salas told the audience about strange lights he saw over the base that disabled all 10 of the intercontinental ballistic missiles under his watch. The missiles suddenly became inoperable. That wasn’t the first time. Eight days earlier, on March 16, 1967, a similar incident occurred at another missile launch control facility.

Mr. Salas revealed this same story a decade ago in 2010 at the National Press Club but with little fanfare. “In the coming days and months, I think we’ll have to deal with this reality because there is abundant and sober evidence, past and present, for the reality of UAP,” said Mr. Salas, who has become a leading figure in the movement to make public more information about UFOs.

The press conference was the result of Mr. Salas’ work for years talking to other Air Force veterans, having them sign witness affidavits describing their own encounters decades ago.

These experiences can be traced as far back as 75 years ago to Roswell, New Mexico, when Jesse Marcel Jr., was an Air Force intelligence officer and reportedly was the first military officer to investigate the UFO crash site in early July 1947. After an initial report that a UFO had been recovered on a ranch near Roswell, the military issued a statement saying the debris was from a weather balloon.

Mr. Salas and some veterans have consistently for decades voiced their concerns about the threat to U.S. national security and the UFOs’ ability to render nuclear weapons inoperable. Others have been quiet.

“I waited 40 years before I opened my mouth, and that’s a long time,” said David Schindele, a retired captain who served as a nuclear missile launch control officer at Minot Air Base in North Dakota. “I had this terrible secret on my mind for all that time, and I felt such great relief to finally admit to my friends and close relatives what I experienced in the Air Force.”

Mr. Schindele explained that he and his commander visited a missile launch site near Minot, North Dakota, in September 1966. While there he saw UFOs disable 10 nuclear-tipped missiles, but the Pentagon leaders summarily buried the incident.
“The Air Force has not been honest with Congress or the American public,” Mr. Schindele said. “Congress and the intelligence community have a responsibility here, and others must be released from the burden of holding back the truth.”

While America’s military may have first witnessed UAPs in the 1940s, the Honorable Elijah Muhammad, eternal leader of the Nation of Islam, taught his followers about these objects in 1932. He referred to the crafts as “The Wheel,” or “The Mother Plane,” which contained 1,500 smaller Baby Planes. He said the purpose of The Wheel was to destroy the present world of evil and that visions of it had been seen thousands of years before it came into being.

The Honorable Elijah Muhammad explained these so-called UFOs are the greatest military weapons ever developed in the annals of the history of Allah (God) and man in this universe.

Further, he taught, the weapon was made for the purpose of destroying the present world ruled by America and Caucasian people in a final battle with the forces of evil. The Mother Plane was described as a half a mile by a half a mile with 1,500 bombing planes that could destroy America in 12 hours.

In Muhammad Speaks newspaper, June 8, 1973, the Honorable Elijah Muhammad wrote an article titled “Ezekiel’s Wheel: The Battle in the Sky,” which stated in part: “I am so happy that Allah (God) has prepared this unmatchable weapon to save us, the Black People [of America]!”

His top student, the Honorable Minister Louis Farrakhan, has also taught extensively on The Mother Plane and Baby Planes.

“The Honorable Elijah Muhammad said that this Great Wheel was made for military purposes, for it was to engage in The Great ‘Battle in the Sky’ that would end this world and usher in that world that the prophets exclaimed would come at the end of the 6,000-year rule of the enemy of Allah (God) and the enemy of the Aboriginal People of the Earth,” Minister Farrakhan previously wrote in The Final Call.

During his Saviours’ Day 2020 message, “The Unraveling of a Great Nation,” he recounted his 1985 more-than-a-vision experience and described his personal connection to The Wheel.

“I represent the Most High God who sits in that Wheel that Ezekiel saw, a Wheel in the middle of a Wheel, and I visited that Wheel. He brought me to that Wheel like Allah brought Muhammad in a night vision to the inner sanctum of Himself,” said Min. Farrakhan.

After that experience Min. Farrakhan went before the world in a press conference at the National Press Club to share his encounter.

Growing verification of these encounters, including an Office of the Director of National Intelligence report of Navy encounters with UFOs released several months ago, have empowered Mr. Salas to do more in calling for a congressional investigation.

In 2004 and 2015 pilots gave eyewitness accounts of a ship that resembled a giant white “Tic Tac” flying without wings or propulsion systems, and a flying cube inside a clear sphere that passed between two fighter jets. The encounters by Navy pilots were initially revealed in 2017 and officially acknowledged by the Navy.

“Imagine a technology that can fly at 13,000 miles per hour, that can evade radar, that can fly through air, water and possibly space, that has no sign of propulsion, no wings, no control surfaces and yet can still defy the natural effects of earth’s gravity,” said former U.S. senior intelligence officer Luis Elizondo in a description of what Navy pilots and military personnel have been seeing for years.

Those sightings caused great concern in Congress and a report was ordered on what was known about UAPs. The preliminary assessment by the Office of the Director of National Intelligence, released in June, was inconclusive. It explained that not enough data exists to determine the nature or intent of UAPs but that they may present a national security risk. The report admitted, however, that the crafts exist.

While the report had what intelligence officials called a “limited amount of high-quality reporting on unidentified aerial phenomena (UAP),” Mr. Salas still considers it an impressive admission. The veterans at the press conference see the report as a potential breakthrough.

“We hope to put enough pressure on people in the government to call for open hearings,” said Mr. Salas. “If we have open congressional hearings, we will know a lot more about the subject because there is a lot of documentation and credible witnesses out there who are reluctant to testify.”

Mr. Salas worked with others to raise over $13,000 on GoFundMe to finance the press conference and have extra money to spend on lobbying Congress.

Nation of Islam Student Minister Ilia Rashad Muhammad, author of the book “UFOs and The Nation of Islam: The Source, Proof, And Reality Of The Wheels,” told The Final Call that military personnel have been coming forward for over a decade.

“All of them describe the same thing. They described disc-shaped objects interfering with military sites, destabilizing their most advanced nuclear sites, disarming their warheads. What these Wheels have been doing is going around monitoring all these different military and nuclear sites just to prove that there is a superior power on scene. They have literally disarmed remotely, disarmed and shut entire nuclear sites down,” he said.

This is the fear the veterans warned about. It’s about the “possibility of our survival,” said Dr. Jacobs.