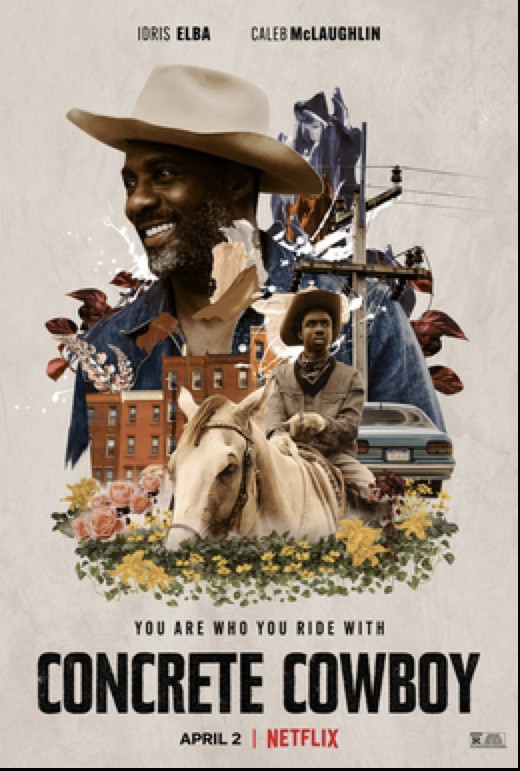 The film “Concrete Cowboy” is a poignant story about a troubled teen sent to live with his estranged father for the summer in Philadelphia where he is introduced to a community of Black cowboys and learns life lessons along the way.

This writer wants to share an interview conducted with OG-Law on his role in the Netflix movie “Concrete Cowboy.” In an interview conducted by Jennica Schwartzman (The Drill Online Magazine); writer/director Ricky Staub stated: “I founded my company in 2011 with a mission to hire adults returning home from incarceration. I speak every year in court to a room of candidates newly paroled.

In 2017 I met a man named Eric Miller, he was speaking to the judge and in only a week since being home mentioned that he had purchased a horse. Not every day do you hear that in court. We struck up a conversation, then a friendship, and eventually decided to put together a film that would highlight the rich history of Black Cowboy culture in Philadelphia in hopes that the story would draw attention to this long-standing legacy and help preserve their heritage which was facing extinction due to gentrification.”

Here is my interview with Michael “OG-Law” Ta’Bon Gregory Muhammad (GM): Tell us about your name OG Law.

Michael “OG-Law” Ta’Bon (OG): Sure. OG Law means (Own By God’s Work); meaning I sold out to God’s plan for my life. Nobody can turn me away from what God wants me to do on this Earth at this time. Great definition. It makes me reflect when the Honorable Minister Louis Farrakhan stated in one of his lectures, “A Made Up Mind Is A Powerful Mind.”

GM: Tell us about your role in the Netflix film “Concrete Cowboy,” and how the horse program helped you and others?

OG: My uncle, his name is Sensei Sunny Uthman Obdisalaam. He was the head of The Black Cowboy Association. As a child, I grew up in Cobbs Creek, walking mentally ill children around in the yard on horses. I was just six, seven, eight years old. My uncle used to own a karate school on 60th and Market. He owned the horse stable in Cobbs Creek. The first time I learned about something outside of myself wasn’t a dog or a cat. I had an uncle, with horses. I fell in love with horses. So, falling in love with something that wasn’t human or something outside of myself, gave me the ability to love others. The horses helped by sort of spreading love.

I met gentlemen, who I thought was straight North Philadelphians, meaning they wear the clothes, the talk. But they were jockeys making over $100,000 a year riding horses. These horses changed some of these mens lives. I have heard many testimonials of the Fletcher Street crew. The whole Fletcher crew appears to be saved by the horses. As much as it looks like they are saving the horses, it’s like the horses are saving them. The horses gave purpose, gave them options.

Again, the horses gave them something to care about outside of themselves. Some of these men, don’t eat because they got to make sure their horses don’t die. So that’s love. The Bible says there’s no greater gift than for a man to give his life for a friend.

GM: Tell us about your Love Team Movement.

OG: National Love Team is my 501c3. It’s been under construction for a while because as a visionary, when you are a Black visionary in this country, it sounds like you have a science lab, or some big garage, or warehouse with tools and supplies. If you’re a Black visionary, you have to create your environment to produce your thought before you even think about producing a thought. Love Team stands for “Life Over Violence Everywhere.”

Together everyone accomplishes more. We specialize in teaming up with individuals, groups, and organizations to create, plan strategies to make peace to protect our people, to create opportunities, to not just getting out there to march or laying down teddy bears. We created education over incarceration. Positive peer pressure can influence a generation to do right.

So, instead of an older person trying to do it, I wrote the rap and put it in the mouth of a child their age. Isaiah Thomas was one of the children that benefited from our program that started in a parking lot. He is now in Philadelphia City Council. He got into politics because he saw us in the parking lot. These programs that we are designing worked to prevent violence. The sad part is the programs that don’t get the funding.

The reason why these other programs don’t work is because these are programs designed based upon educated guesses. They never include frontline people or frontline information when somebody say, “hey” $15- $30 million worth of grants. Smart people that never went out in the streets to help people, they hear the “dollar amount” of the grant and then they decide. (Some say) “I know, what I am going to do. I am going to create a program that do this so that I can get the money.” Some have good intentions.

GM: During your incarceration how did you spend your time?

OG: I was sort of like an activist in the prison. I stood up against the guards who were doing an injustice to prisoners. I earned a reputation of helping fellow prisoners who were having problems adjusting to their environment. I was the prison chaplain clerk. I gave out all the books of the Nation of Islam and other religious groups. I was very militant when I was on the inside. All the powerful brothers in the jail help bring peace among the different gangbangers. This was at SCI-Albion, Pennsylvania.

GM: Can you tell us a little about your contribution to 10-10-15 Justice or Else 20th Anniversary of the Million Man March?

OG: I created artwork and then dragged the messages through the community, and I got people to sign and become a part of the art by writing their feelings about Justice or Else, bury the hate, education over incarceration. These are some of the things I done. So, the one I did for Justice Or Else it was taken to Mosque Maryam and given to the Honorable Minister Louis Farrakhan. I sent two persons to deliver it to the Minister.

GM: What was/is your relationship with the NOI Prison Reform Ministry inside of the prison?

OG: When I first got to prison, I was searching for myself. I searched Christianity. I won’t give my opinion. I didn’t consider myself following the principles of Christianity. I then studied Islam and tend to believe the Nation of Islam knowledge. The reason why I can appreciate the Nation of Islam is because I am a lover of the truth. I was searching for the truth for many years. And it wasn’t until so many bad things happened in the world that I realized who was telling the truth, because so many were talking.

My father was a Muslim, my mother was a Christian. I’m pulled this way and that way. I’m looking for the truth and I believed I found the truth coming out of the mouth of Brother Minister Louis Farrakhan as it refers to Black people, specifically and to the world in general. I believe he is a living legend and I believe he is underappreciated. I wish he could have a fair platform to speak with Bill Gates, the president, and stop playing with this man and have a conversation back and forth.