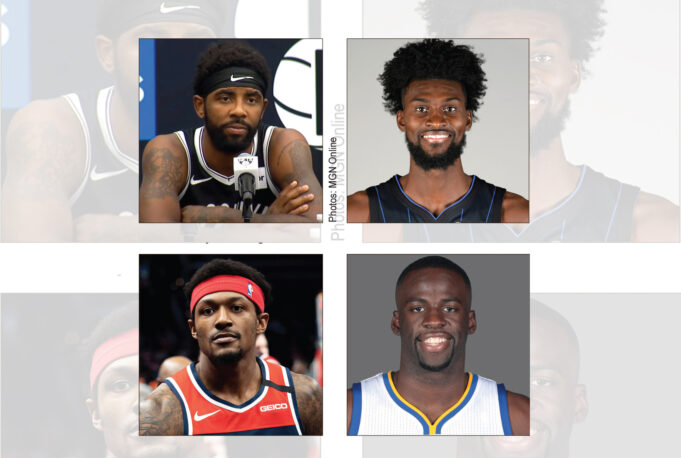 “Mr. Alan Dershowitz, if you bring the Covid-19 vaccine and say you’re going to bring your army to force us to take it, once you try to force us, that’s a declaration of war on all of us. You only have this one life. Fight like hell to keep it and fight like hell to destroy those whose heart and mind is to destroy you and take your life from you.” –The Honorable Minister Louis Farrakhan— “The Criterion”

Kyrie Irving and all NBA players have it better than most Americans when it comes to understanding the deadly impact of the COVID-19 “vaccine.” Every night they play before massive crowds cheering their every move. Brother Kyrie plays for the Brooklyn Nets at the 17,000-seat Barclays Center arena.

Every game, whether home or away, he can look around and see the appalling number of people killed by the COVID-19 “vaccine.” It is a gruesome sight. This is the number of people who were, for the most part, living normal lives. Then came the virus and with it the deadly vaccine and takeover of the minds of the people by the most relentless, suffocating, corporate media campaign in U.S. history.

According to the CDC’s own calculations, at least 17,128 Americans have been killed by the “jab” that Fauci and his depopulation plotters have deployed and forced into 190 million arms.

The NBA is filled with Black men in exemplary physical condition. They have reached that level of athletic proficiency by supporting their God-given talent with diligent and disciplined self-care for their overall health. They are acutely aware of the effects of the government poison. Beyond the homicides, 26,200 Americans have been permanently injured; 84,000 hospitalized; 92,000 have required urgent care after receiving the shots. That stunning number of reported deaths and injuries represents just one percent of the actual number—most deaths and injuries from the COVID killshot are unreported.

Players know they are part of the notorious NBA plantation system that cares only for the profits owners can wring out of Black bodies. Commissioner Adam Silver, who has no perceptible athletic talent and no medical education at all, has determined that on his plantation “it’s perfectly appropriate that…cities have passed laws that require people who both work and visit arenas to be vaccinated. That seems to be a responsible public health decision.”

Black players have balked at taking medical advice from the profit-driven administrator, and several powerful NBA athletes have refused to become public guinea pigs for him and the team owners. The Lakers’ Kent Bazemore was clear about how he Eats to Live: “I do everything I can to strengthen my immune system, with hours upon hours of cooking, preparing my meals at home, really being conscious of what I put in my body and taking care of my health.”

He continued, “My family has a history of heart disease and all these different things, and I’m trying to turn that around for my lineage. So, I’m taking it upon myself to do everything I can to keep my immune system strong and live a healthy and long life.” Bazemore ultimately took the lethal shot but “seemed to imply that signing with the team was contingent on his agreement to be vaccinated.”

A powerful few say they will not be forced to take the injections nor bullied into disclosing their vaccination status, a stance that puts these superstars in the company of the highly educated. According to a Carnegie Mellon study of vaccine attitudes, the highest “vaccine hesitancy” was “among those with a PhD.” It is the most intelligent of players who are refusing to risk their lives to enrich Pfizer, Moderna, and Johnson & Johnson and further the Depopulation Agenda. For that they face threats of suspensions, terminations, fines, and media harassment.

Golden State Warriors star Andrew Wiggins applied to the NBA for a religious exemption from taking the 17,000-death shot and was summarily denied in a rude public statement designed by Silver to send a chill through any other players who might also seek exemptions: “The NBA has reviewed and denied Andrew Wiggins’ request for religious exemption. Wiggins will not be able to play in Warriors home games until he fulfills the city’s vaccination requirements.”

Silver added, “Unvaccinated players who do not comply with local vaccination mandates will not be paid for the games they miss.” Silver chose to scoff at Wiggins’s commitment to his religious principles, offering a vivid reminder of the righteous stand boxer Muhammad Ali against the satanic killers of his day. Wiggins adheres to what God has mandated: fighting disease through fresh air, sunlight, and nutritious foods—all of which boost immunity to a virus with a near 100% survival rate.

Wiggins also said no one in his family is vaccinated. “It’s not really something we believe in as a family. I’m 26. I have two kids. I want more kids. I’m trying to do something that will generate as much money as I can for my kids and my future kids, trying to make generational wealth.

This is a significant observation on the part of a young man in his twenties. But it is no coincidence that Andrew Wiggins is a conscious man driven by a set of spiritual principles and dietary laws. He is the son of Chicago Bulls’ Mitchell Wiggins, whose teammate Darius Muhammad brought to the Final Call Building along with other members of the Bulls back in the early 1980s to hear the Honorable Minister Louis Farrakhan.

After he succumbed to pressure and took the injection, a rueful Wiggins no doubt expressed the feelings of many fellow athletes: “I feel like the only options [were] to get vaccinated or not play in the NBA. Hopefully, it works out in the long run and in 10 years I’m still healthy….[G]etting vaccinated, that’s going to be something that stays in my mind for a long time. It’s not something I wanted to do, but kind of forced to.

I guess you don’t own your body. That’s what it comes down to. If you want to work in society today, then I guess they made the rules of what goes in your body and what you do. Hopefully, there’s a lot of people out there that are stronger than me and keep fighting, stand for what they believe, and hopefully, it works out for them.”

Teammate Draymond Green addressed the pressure being applied to these multi-million-dollar athletes: “I think there is something to be said for people’s concern about something that’s being pressed so hard. Like, why are you pressing this so hard? Like, so much, just pressing and pressing and pressing. I think you have to honor people’s feelings and their own personal beliefs—and I think that’s been lost when it comes to vaccinated and non-vaccinated.

And it kinda sucks that that’s been lost, because you’re essentially not giving anyone…you say we live in the land of the free? Well you’re not giving anyone freedom because you’re making people do something, essentially. Without necessarily making them, you’re making them do something. And that goes against everything that America stands for, or ‘supposedly’ stands for.”

As it now stands Kyrie Irving is penalized and benched by the NBA at the pinnacle of his career, even though he is considered by many to be one of the greatest players in the league’s history. Kyrie said, “I chose to be unvaccinated, and that was my choice, and I would ask you all to just respect that choice .This is about my life and what I am choosing to do.

Jonathan Isaac of the Orlando Magic was undaunted by the vaccine madness of the NBA’s talentless white overlords. He said: “I think I would be doing the exact same thing that Kyrie is doing. I think what he is understanding and what he is portraying is that the principle of people’s freedom, the principle of living in this country and caring about the person next to you, whether they lose their job or not over something, to me that is nuanced and not black and white issue. To me that is a hill he is willing to die on.”

“[I]t is my belief that the vaccine status of every person should be their own choice. Completely up to them without bullying, without being pressured, without being forced into doing so. I’m not ashamed to say that I’m uncomfortable with taking the vaccine at this time. We’re all different. We all come from different places. We’ve all had different experiences and hold dear to different beliefs. And what it is you do with your body when it comes to putting medicine in there should be your choice, free of the ridicule and the opinion of others.”

Isaac continued, sounding more knowledgeable of the medical issues than the many Big Pharma-bribed doctors and government officials: “I’ve had COVID in the past and I feel like I’ve done a good amount of research that’s only getting stronger that suggest immunity from natural infection is just as good, if not better than immunity from the vaccine,” stated Isaac quoted in the Daily Caller.

Washington Wizards star Bradley Beal has clearly reviewed the CDC’s own data which shows that the COVID “vaccine” has killed and maimed more people in ten months than all other vaccines combined since they have kept records. Beal raised the obvious questions: “Some people have bad reactions to the vaccine.

Nobody likes to talk about that. What happens if one of our players gets the vaccine and they can’t play after that or they have complications after that, because there are cases like that? But I feel like we don’t talk about those as heavily because they are so minute maybe? But they are existent.”

Beal could be referring to former Atlanta Hawks point guard Brandon Goodwin, whose career was torpedoed by the COVID-19 “vaccine.” He said he suffered blood clots that sidelined him halfway through the 2020-21 season and charged that officials employed by team owner Tony Ressler called him when he was in the hospital and told him not to disclose his diagnosis. Blood clots are a dangerous but common side effect linked to all three COVID “vaccines.”

“I was super tired in the games…. I felt like I couldn’t run up and down the court. My back was hurting. Then we went home, that’s when my back really started hurting bad…. I was fine up until I took the vaccine, I was fine.”

And though Adam Silver and the NBA leadership have bullied, coerced, and even blackmailed a reported 95% of players into endangering their health with the deadly serum, new and defiant voices have emerged that will have a long-lasting impact on the Black youth who embrace athletes as heroes. Nearly two generations ago, Muhammad Ali empowered the youth and energized the anti-Vietnam war movement.

Today, young Black men like Kyrie Irving, Draymond Green, Bradley Beal, and many others embolden our youth with their principled stand against medical tyranny. Jonathan Isaac speaks well for his brothers in the NBA: “Whether you are vaxxed or not you are free to stand by your convictions. I stand with you and against bullying!! Keep the faith!! Thank you, Jesus, for grace lol Holy Spirit was and is for sure my strength!!