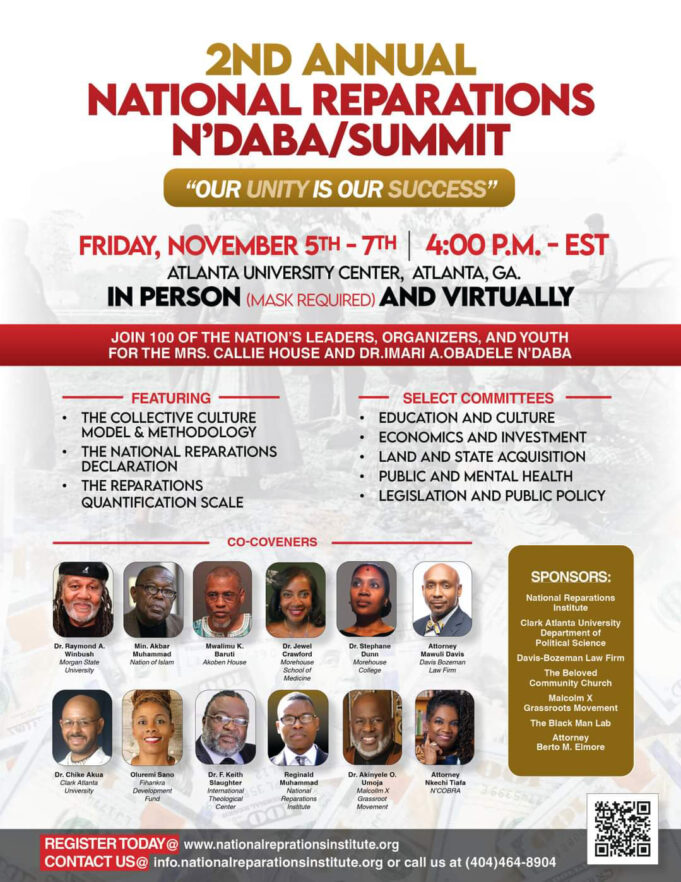 The topic of reparations is once again front and center. The 2nd Annual National Reparations N’Daba/Summit will take place Nov. 5-7 at the Atlanta University Center in-person and virtually. Reginald Muhammad, executive committee for the National Reparations Institute, is one of the co-conveners of the summit.

He told The Final Call there are four primary objectives for the summit: to consolidate and unite the entire reparations movement, to make sure Black people are controlling their own narratives, to implement the ‘Collective Culture Model’ and to leave five select committees in place, which together will issue a final report and recommendation on reparations.

“It’s not going to be a march, it’s not a rally, it’s not a meeting. It’s an action summit,” Mr. Muhammad said. “At the end of the day, we’ll have at least 100 organizations and individuals, leaders, who will be taking part and sitting down in a three-day effort to ensure that we implement those objectives.”

The five select subcommittees are: education and culture, economics and investment, land and state acquisition, public and mental health, and legislation and public policy.

Other speakers and co-conveners are: Dr. Raymond Winbush, director of the Institute for Urban Research and a research professor at Morgan State University, and author of the book “Should America Pay?”; Dr. Jewel Crawford, a family physician who teaches at Morehouse School of Medicine; Mwalimu K. Baruti, co-founder of Akoben House, an independent Afrikan-centered publishing company; Student Minister Abdul Akbar Muhammad,

International Representative of the Nation of Islam and the Honorable Minister Louis Farrakhan; Dr. Stephane Dunn, a professor of English at Morehouse College and a member of the executive committee of the National Reparations Institute; Civil Rights attorney and human rights organizer Mawuli Davis of Davis Bozeman Law Firm; Dr. Chike Akua, a professor of educational leadership at Clark Atlanta University who is also a member of the National Reparations Institute executive committee;

“Black people should demand reparations because it is due. We’re talking about unfinished business since the time of the Civil War,” said civil rights activist and attorney Nkechi Taifa.

She said, “Black people must come together to determine what reparations look like.”

Physician and social justice activist Dr. Jewel Crawford said, “A summit on reparations is important because Black people are in bad condition as a result of historical injustices.

“We have not been able to overcome these challenges that we’ve been faced with as a result of our mistreatment in this country,” she said. “And we are owed reparations, and that was made clear 20 years ago at the United Nations World Conference Against Racism,” said Dr. Crawford.

The Honorable Elijah Muhammad published the following words in his book “Message to the Blackman in America” in 1965:

To that end, organizers of the summit are looking at that land question in terms of reparations. Reginald Muhammad, who has been a student of the reparations movement for over 30 years, said what’s different about this reparations summit compared to others is the plan to implement the National Reparations Declaration, a 54-page document that will allow readers to be “very clear about what reparations is, who owe us, why they owe us and how much they owe us.”

The National Institute of Reparations defined “complete reparations” as “the process by which a nation, or a people, is provided with the means to repair and restore their condition, achieve decolonization, and make themselves whole through the ability to self-govern, self-sustain and self-defend, with their own independent land mass, economy, education, culture, and high civilization.”

Reginald Muhammad is a political and behavioral scientist at the institute. He wrote his master’s thesis on “The Movement  to Secure Reparations for Blacks in America: An Analysis of Fragmented Models and Methodologies.” He said the summit will reveal to the public and utilize the “national reparations quantification scale.”

The scale was designed by Michael Muhammad, who is a part of the executive committee for the National Reparations Institute.

“What we were able to do is calculate the 300 years of forced free labor, number one. Number two, land stolen from Blacks. … Then number three, we looked at closing the wealth gap. And then for the damages that have been done, the 400 years of suffering in America, discrimination, Jim Crow and all of that,” Reginald Muhammad said.

Through their methodology, the institute came up with a minimum figure of $83 trillion that is owed to Black people in America who are the descendants of slaves. Their calculations included at least 14 million acres of land that was stolen from Blacks, forced free labor from 1555 to 1865, five centuries of the murder of Blacks and the closing of the Black-White wealth gap.

She co-authored the 1987 book “Reparations Yes,” along with Dr. Imari Obadele and Atty. Chokwe Lumumba, and has a book on reparations releasing in early 2022. Atty. Taifa is a long-time activist and advocate in the reparations movement, and she has testified before Congress on the issue as well as before the D.C. City Council and the Maryland City Council.

“The harms from the enslavement era and its vestiges were multifaceted, thus the remedies must be multifaceted as well. It’s not just one thing,” she said. “There were so many different injury areas, so many different harms, whether it’s in the Black-White wealth gap, whether it’s in health disparities or educational inequities or the criminal punishment system disparities. All of these areas. Whether it’s the trauma, the mental issues.”

Legislative efforts and the need to unite

Atty. Taifa is also a founding member of N’COBRA, The National Coalition of Blacks for Reparations in America. “One of our key principles was to make reparations a household word, to really begin to mainstream it, because prior to that time, reparations had largely been on the fringes within the Black nationalist and Black cultural communities, but it had not really gained acceptance amongst the larger population, Black or White,” she said. But now, she said, all that has changed.

Numerous cities across the country are looking at reparations for Black residents. In Nov. 2019, the City Council of Evanston, Ill., implemented a reparations fund and reparations subcommittee. The city committed $10 million to fund local reparations for housing and economic development programs for Black Evanston residents over the next 10 years. One of the first programs established under the reparations resolution was a Local Reparations Restorative Housing Program, which was approved on March 22.

The California Reparations Task Force has been hearing testimonies on racism and anti-Blackness, including modern day housing and education segregation, racism in banking and the racial wealth gap. Also in March, the San Francisco Board of Supervisors voted to appoint a 15-member African American Reparations Advisory Committee. In June, 11 U.S. mayors announced that they would pay reparations for slavery to their Black residents, and the Asheville, N.C., Council committed $2.1 million to funding reparations. There are a number of other cities across the country also passing bills and setting up commissions.

After first being introduced to Congress in 1989 by John Conyers, Jr., a Democratic representative from Detroit, H.R. 40, legislation to establish a federal reparations committee, was passed by a House committee in April and is now making its way to the floor.

Atty. Taifa attributed the upsurge of energy towards reparations to both the  killings of George Floyd, Breonna Taylor and Ahmaud Arbery and to the January 6 insurrection on the U.S. Capitol, which she said removed the blinders from people’s eyes. She also noted that several atrocities are coming into mainstream knowledge, such as the Tulsa, Okla., race massacre, and the massacres in Elaine, Ark., massacre, Rosewood, Fla., and Wilmington, N.C.

She described reparations as an issue whose time has come, and she referenced a speech by the Honorable Minister Louis Farrakhan, “Add It Up,” where he went through America’s history of evils done to Black people in the country.

Dr. Crawford wrote a chapter titled, “The Slave-Health Deficit” in the book “Should America Pay,” where she elaborated on the need for health care reparations.

“We need this money. We need the money to correct all the problems that we’re facing. We need the money to improve health care for our people. We certainly need it for housing. We have lots of housing problems, especially in this era of climate change. We need it for every aspect,” she said. “We have to educate our people, supplemental education. You name an area, job training, economic development, business, business incubation, business incentives and money to start investing in businesses. So, we need to get paid.”

She said people should leave the summit with a plan and clear roles on implementing the plan. “What we need is to do strategic planning and find out how we can address these problems on our own with our own money and then what the strategy is going to be to move forward so that we can receive reparations,” she said. She also said the youth must be involved in the effort.

Reginald Muhammad said the summit is for everyone and that organizations who register are being allotted one representative to speak for them.

“If you agree that Black people deserve reparations in America, you are welcome to the N’daba (Great Gathering) that we’re going to have on the 5th, 6th, and 7th,” he said.

He added that all of the civil rights organizations were invited. ADOS, or the American Descendants of Slavery, were also invited. Along with N’COBRA, the Dec. 12th Movement, and a Black human rights organization based in New York City, will be present, as well as Dr. Leonard Jeffries, the renowned Pan-Africanist and former Black studies professor.

Reginald Muhammad explained that one of the outcomes of the summit will be to send current research, reports and recommendations to Congress to support H.R. 40. He said the National Reparations Institute would be doing its own polling in the upcoming weeks to get Black people’s thoughts on reparations, and organizers will also go on a national tour, traveling to at least 25 cities. Afterward, a report will be released on their findings.

For more information and to register for the summit, visit nationalreparationsinstitute.org. Email [email protected] or call 404-464-8904 for questions.