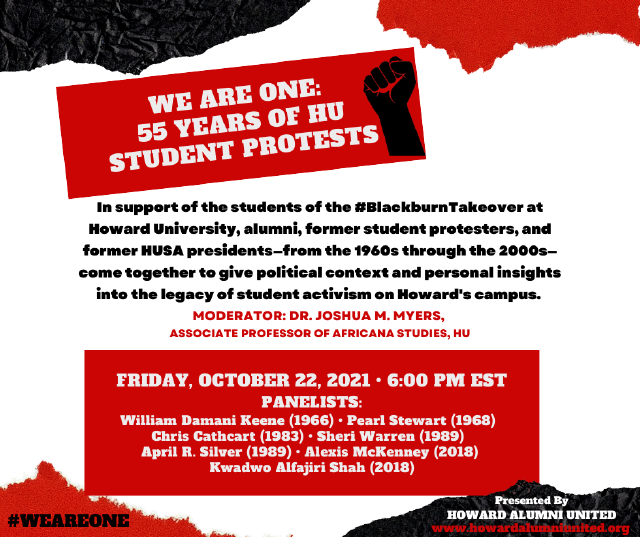 As students at Howard University engage in protests due to poor housing conditions, alumni who have engaged in campus protests during the past 55 years held a virtual discussion via Zoom on past activism, the situation at hand and how they can help current students.

The discussion was organized by Howard Alumni United, an organization fighting for representation on Howard’s Board of Trustees after student, alumni and faculty seats were eliminated in June. The group is also planning to establish an independent alumni organization that does not rely on university administrative and financial restrictions.

Panelists included William Damani Keene, who participated in a 1966 Howard student protest; Dr. Ewart Brown and Pearl Stewart, both of whom were involved in a 1968 protest where over 1,000 students occupied the Administration Building (A Building); Chris Cathcart, who participated in a 1983 protest, Sheri Warren and April R. Silver, both of whom participated in a 1989 protest where over 1,000 students, again, occupied the A Building, and Alexis McKenney and Kwadwo Alfajiri Shah, who were involved in a 2018 protest that led to a nine-day occupation of the A Building.

Student Erica England, president of the Howard Chapter of the Young Democratic Socialists of America and political science major, also was present and vocal during the discussion. She has been an active participant in the current campus protest, where students organized a sit-in at Blackburn University Center in response to the school’s housing crisis.

The panel was moderated by Dr. Joshua M. Myers, an associate professor of Africana Studies and author of the book “We Are Worth Fighting For: A History of the Howard University Student Protest of 1989.”

April R. Silver said one of the reasons for the discussion is to send a virtual love letter to all the students at Blackburn Takeover.

Ms. England opened by detailing the lack of campus housing. She said Howard pushed out upperclassmen to make room for its largest freshman class and that Howard has sold one of its dorms, Meridian Hall, which is now a luxury apartment complex. Howard is also leasing Carver Hall and Slowe Hall as apartments. The dorms that are housing students have been plagued with mold, pipes bursting and rodent infestations.

One of the first examples of activism at Howard, noted by Dr. Myers, was in the 1920s with the founding of an unofficial alumni organization. Though Howard was established in 1867, it didn’t have a Black president until 1926. “It was that organization that was responsible for the idea of having an actual Black president be in charge of the university,” Dr. Myers said.

Dr. Ewart Brown described protests as synonymous with Howard. “The protests for the Black studies course, the protest to end apartheid, the protest to get James Cheek to resign, these were all things done that I think empowered students, in a historical sense,” Chris Cathcart said.

He attended Howard when Ronald Reagan was the U.S. president. He saw the violence of the 1980s apartheid in South Africa, he saw Jesse Jackson run for president in 1984 and he also was involved in protests to get Martin Luther King, Jr. Day as a federal holiday.

Current president of Howard, Dr. Wayne Frederick, was appointed to his position in 2014. Alexis McKenney described a 2017 interaction between him and former U.S. Secretary of Education Betsy DeVos as “the beginning of tactics that we’re seeing through today in terms of the secret meetings, the lies from the administration and the ways that students, alumni and faculty are really shut out from crucial decision-making processes that affect many layers of life on campus.”

Her first protest was after Darren Wilson was acquitted in 2014 for the murder of 18-year-old Michael Brown in Ferguson, Mo. She marked that campus protest as the context in which HU Resist, a collective of Black students organizing for Black liberation, was created. HU Resist played a pivotal role in the 2018 protest, where students occupied the A Building for nine days until university officials agreed to meet student demands.

Many of the panelists noted the cyclical nature at Howard and called for the Board of Trustees positions to be reinstated. Ms. McKenney added that those positions were in place when all of them were protesting.

“These infrastructural issues still existed and persisted and continue to exist and persist. So for me, I think speaking of cycles and the cyclical nature of this, what is necessary to break these harmful cycles?” she questioned.

Panelists also mentioned that the longer presidents stay, the more they change and the more detrimental their actions become. Other points of discussion included alumni possibly withholding giving to the university until change happens, questions of what Howard is doing with the money it receives and the need for Howard to consider itself more a part of the HBCU community instead of aspiring to elite White academia, a point noted by Kwadwo Shah.

Erica England listed the top things alumni can do for students participating in the Blackburn Takeover: continuing to connect with students; providing mental health resources independent of the college’s administration; mentorship, internships and fellowships to financially support students; showing up in mass physically; and putting pressure on administration to grant immunity to students.

Panelists mentioned the possibility of continuing the three-hour long discussion in a part two.