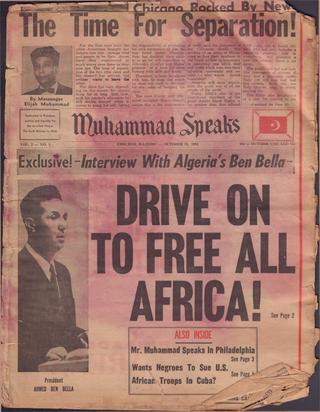 In the early part of the 20th century when the Most Honorable Elijah Muhammad accepted a mission he described as giving life, light, and power to the Black once-slave in America, it was universal in scope.

“WE BELIEVE that Allah (God) appeared in the Person of Master W. Fard Muhammad, July 1930; the long-awaited “Messiah” of the Christians and the “Mahdi” of the Muslims. We believe further and lastly that Allah is God and besides HIM there is no God and He will bring about a universal government of peace wherein we all can live in peace together,” notes “Point Number 12.”

Woven in the fabric of what Elijah Muhammad received from his teacher, Master W. Fard Muhammad, was a global mandate starting with his people and the indigenous people of America, who he made friends with and connections to. However, writers and scholars of academia alike who studied and wrote about Elijah Muhammad often limited their narratives to “he was a social reformer,” an “economic giant” who led a “mass movement” of Black people. The Most Honorable Elijah Muhammad was and is much more, then and now.

Other important dimensions of his work, mission and impact have gone largely unmentioned such as his international respect, influence, and reach.

James Tyler, author, and associate professor of geography at Kent State University, told The Final Call that some in a number of White-dominated disciplines and academies unfairly dismiss and ignore that the ideas of people like Elijah Muhammad and others in the Black Radical tradition are global in scope. As academia, “we need to move beyond” such positions, he said.

“Elijah Muhammad was a noted thinker within the broader history of not only Black radical thought, but in political philosophy more broadly,” said Prof. Tyler. “His ideas were both global in outlook and global in reach,” he added.

For his followers and observers, the profundity of the wisdom of Elijah Muhammad can be understood in its universal reach. While he spent over 40 long years reclaiming, redeeming, and saving Black people in America from the clutches of a 400-year enemy, he also worked to connect the Original family of Black, Brown, and Red people worldwide. He linked with the indigenous nations of America and formed a base in Mexico where he established a home. He linked with Africa and the Muslim World where he was and is respected.

“It started with his insistence that Black people in America be taught the religion of Islam,” said Demetric Muhammad, student minister and a member of the Nation of Islam Research Department.

He referenced the Biblical passage describing the fear of Pharaoh who said, “Come, let us deal wisely with them, lest they multiply and in a time of war join on to an enemy of ours and come against us.”

Demetric Muhammad explained that same scenario paralleled the life and work of Elijah Muhammad. “He taught Islam to Black people in America and Islam has long been considered the religion of many of America’s global enemies,” he said.

Elijah Muhammad was hated by the U.S. government for teaching Islam as the solution to the problem of Black America. Simultaneously, however, he became endeared to Black Africa and Asia.

Student Min. Demetric Muhammad noted Elijah Muhammad went against the grain of a determined idea to curtail the global expansion of Islam from reaching the Western Hemisphere as it did in Europe. “Islam in the Western Hemisphere is a big deal in terms of international affairs,” the Memphis-based student minister noted. “The Honorable Elijah Muhammad’s work of establishing Islam in America captured the attention of the international community,” he added.

The Honorable Elijah Muhammad engaged the global landscape in the 1940s, by lifting his voice against his people fighting in World War II and was labeled a “Japanese sympathizer” by the U.S. government, falsely charged, and imprisoned under an Executive Order signed by President Franklin D. Roosevelt for draft evasion, though he was older than the required age.

“As early as ’57 it’s there … that there’s a link between the Nation of Islam and President Nasser,” said Student Min. Carlos Muhammad.

The Egyptian leader was reputed to have offered the Honorable Elijah Muhammad residence where he would be readily accepted and could teach the people of the North African country. Elijah refused, opting to remain on his mission to resurrect and restore his suffering people in America. It was the work of establishing freedom, justice, and equality among Black people steeped in the residue of mental and spiritual death that garnered global respect for Mr. Muhammad.

Between November 1959 and January 1960, Elijah Muhammad embarked on a world tour where he met and made friends. He was received in Turkey, Pakistan, Syria, Sudan, Egypt, Ethiopia, Lebanon, Jordan, and Saudi Arabia where he made Umrah (mini pilgrimage). He was received and afforded the hospitality of a king and head-of-state. The trip also stilled the slanderous voices of detractors actively spreading lies that the Nation of Islam was not recognized by the world of Islam.

Writing back to America, Elijah Muhammad compared the experience to Prophet David’s Psalm: “Behold, how good and how pleasant it is for brethren to dwell together in unity!” The Biblical verse illustrates his treatment by friends made for him in the Muslim World by Allah (God) as he expressed in his correspondences.

“We were lucky on our arrival in Jeddah; to our surprise, Allah had placed a guide for us on the plane,” said Elijah Muhammad in words describing his travels.

By the early 1970s he guided the Nation of Islam into international trade and commerce. Elijah Muhammad began importing millions of pounds of fish from Peru as one of a number of international business relationships.

“We know of no other Black groups or churches set up for trade in imported products for Black people of America,” a New York minister representing Muhammad Mosque No. 7 in Harlem told the New York Times in a 1974 article.

His international influence attracted relationships during the 1950s and 1960s when many African nations were breaking the yoke of colonialism. As African nations were winning liberation, they attained membership at the United Nations in New York City where they formed bonds with Elijah Muhammad’s representatives. Through Minister Malcolm X and later Minister Louis Farrakhan, ambassadors and leaders interacted with the Nation of Islam.

“His redefining Blackness for us to include Brown, Red and Yellow people … made us to see ourselves as citizens of the world,” explained Demetric Muhammad.

Abdul Akbar Muhammad agreed the paper was an important factor in Elijah Muhammad’s global impact. “Muhammad Speaks was responsible for the international thrust of the Honorable Elijah Muhammad,” he said. “The papers circulated all over the world.”

Abdul Akbar Muhammad added that the influential publication helped expand Elijah Muhammad’s work in the Caribbean because “Brothers from the Caribbean would carry copies of the paper there,” he said, further exposing the teachings.

Writers like Charles Howard wrote about the international struggles in different countries and was instrumental in the papers being circulated at the UN. Leaders like Ahmad Ben-Bella (Algeria), Jomo Kenyatta (Kenya), Kwame Nkrumah (Ghana) and others had front page coverage, recalled Abdul Akbar Muhammad. “Although detractors have consistently tried to downplay and marginalize the Honorable Elijah Muhammad on the world stage, his history of success stands out,” he stated.

Answering negative propaganda by the White American press reporting criticism allegedly made by a Muslim leader in Saudi Arabia, Elijah Muhammad talked about his good relations with the Muslim World.

“We are the brother of the Muslims not only of Arabia but from all over the entire world, wherever one is found. This I have proved time and time again,” wrote Elijah Muhammad in “Message to The Black Man in America,” the definitive book of his teachings.

“They know me and I know them; we are not enemies of each other,” said Elijah Muhammad. —Brian Muhammad, Staff Writer