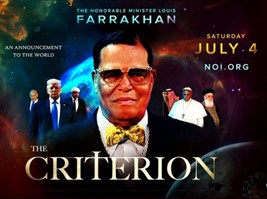 “This [data] has led many observers to conclude that the Covid spike protein — which is generated in the bodies of those who take mRNA vaccines — is a race-specific bioweapon designed to achieve depopulation of minority groups. [Minister] Louis Farrakhan, Leader of the Nation of Islam, has engaged in many efforts to bring this to the attention of his followers, for example. These data provided by the DoD (Department of Defense) / JAIC (Joint Artificial Intelligence Center) / Project Salus document shown here appear to support the plausibility of such theories.” —Mike Adams, Global Researcher, October 1, 2021 interview with Attorney Thomas Renz (Brighteon TV)

The Honorable Minister Louis Farrakhan has been warning Black people for decades about the U.S. Government’s plan to kill billions of people through a depopulation agenda, most recently in his July 4, 2020 Global Message, “The Criterion.” More evidence bearing witness to his divine guidance has surfaced through an interview with California-based Attorney Thomas Renz conducted by global researcher Mike Adams.

Of the 16,310 people who have died in America since receiving the Covid-19 “vaccine,” Black and Indigenous people have been hardest hit and evidence is demonstrating it is deliberate. In addition, the “vaccine’s” effectiveness wanes over time, according to data documented by the Artificial Intelligence branch of the Department of Defense under “Project Salus.” Attorney Renz broke the news during the interview, which aired October 1, 2021. (Brighteon TV at brighteon.com.)

After being fully vaccinated, 161,000 people were infected with Covid-19. Previously called “vaccine failure,” these post-vaccine infections are now referred to as “breakthrough cases.” Approximately 33,000 people were hospitalized, and 10,400 required ICU admission. These disturbing numbers are found in the federal government’s 17-slide presentation entitled “Effectiveness of mRNA COVID-19 Vaccines Against the Delta Variant Among 5.6M Medicare Beneficiaries 65 Years and Older.”

“…This is bombshell information that obliterates the official narrative of (President Joe) Biden and (Dr. Anthony) Fauci, which falsely claims that we’re experiencing a pandemic of the unvaccinated,” Mr. Adams summarized.

He explained that “Project Salus” is run in cooperation with the Joint Artificial Intelligence Center, utilizing Humetrix, a platform which provides real-time analysis of health care information. Between January and August 2021, it ran an analysis of 5.6 million fully vaccinated Medicare beneficiaries aged 65 or older who received the deadly mRNA product: 2.7 million with Pfizer and 2.9 million with Moderna.

“Biden, Fauci, all these guys, you can see where they reference the CDC and different things— graphs from CDC presentations—things like that throughout this. There is zero question these guys know this. They’re lying to the American people outright. This is a crooked marketing project for Big Pharma, big tech, big government, at the expense of American lives, and it’s got to stop,” charged Attorney Renz.

He emphasized data showing that the risk of infection and hospitalization for those who are unvaccinated is falling over time.

A final slide showed Native Americans have the highest increased risk of hospitalization after vaccination of any ethnic group (50%), followed by Hispanics (40%) then Black People (25%).

“This is hitting Native Americans more than any other group and yet nobody is warning the Native American community about what is effectively [Antibody Dependent Enhancement] from vaccines,” stated Mr. Adams.

“Why is this the case? The gain-of-function properties which were engineered into the SARS-CoV-2 biological weapon—via Fauci, Daszak (President of research company EcoHealth Alliance) and the NIH (National Institutes of Health) — target ACE2 receptors which exist in higher densities in targeted organ systems of many minority groups such as Native Americans, Hispanics and Blacks,” wrote Mr. Adams in an October 11 summary of the data.

Attorney Renz said he doesn’t have enough evidence to achieve certainty, but he has heard numerous reports about the dangerous effects the “vaccine” seems to pose especially to so-called minority communities. “It has to do with certain genetic differences…. But, luckily for us, I also just got the report that in New York City, one of the most vaccinated places in the universe, only 26% of African Americans are vaccinated.

If that’s true, good…Now I said yesterday on an interview there’s not a whole lot of times in my life where Louis Farrakhan and I have been on the same page. But when it comes to this vaccine, we’re dead on there.” Attorney Renz went on, suggesting that the low vaccination rate among Black people in New York City is attributable to The Minister’s July 4, 2020 warning “Don’t take their vaccines.”

The Minister is “absolutely correct,” concurred Mr. Adams. “He is Nation of Islam, but there are many other different groups of course, they are recognizing that this appears to be, in their view, a biological weapon targeting Blacks and Hispanics and basically people of dark skin,”

Minister Farrakhan has been at the forefront and often alone in warning Black people of Satan’s (U.S. Government) diabolical plans long before Covid-19.

The “depopulation memorandum” introduced by Henry Kissinger, the former secretary of state under President Richard Nixon, became the policy of the U.S. Government, stated Minister Farrakhan, during Part 37 of his 58-week Lecture Series “The Time and What Must Be Done,” which originally aired Saturday, September 21, 2013.

The policy to depopulate the Third World by putting sterilants in water and staple foods, as well as other methodologies, is primarily through the United States Department of Agriculture, Department of Defense, Agency for International Development (USAID) and the “CIA” (Central Intelligence Agency), Minister Farrakhan revealed.

“This ‘depopulation’ is driven by policy which concerns the national interests of America for the raw materials of Third World nations:  the land, the water, as well as minerals, gold, silver, uranium, and oil.  We previously spoke of Dr. Henry Kissinger’s National Security Study Memorandum 200, which stated this policy of depopulation that was accepted under President Gerald Ford, and was reintroduced again under President Jimmy Carter.  And unfortunately, it’s still policy today toward the Third World.”

“ ‘… It’s easier to kill a million people than it is to control a million people’… Zbigniew was not playing. It is easier to kill a million because they are killing millions as we speak,” Minister Farrakhan said in The Criterion. “They are making money now, plotting to give seven billion five hundred million people a vaccination. Dr. [Anthony] Fauci, Bill Gates and Melinda [Gates], you want to depopulate the Earth. What the hell gives you that right? Who are you to sit down with your billions and talk about who can live and who should die? That’s why your world is coming to an end quickly because you have sentenced billions to death. But God is now sentencing you to the death that you are sentencing to others. Yes, Allah is Great.”