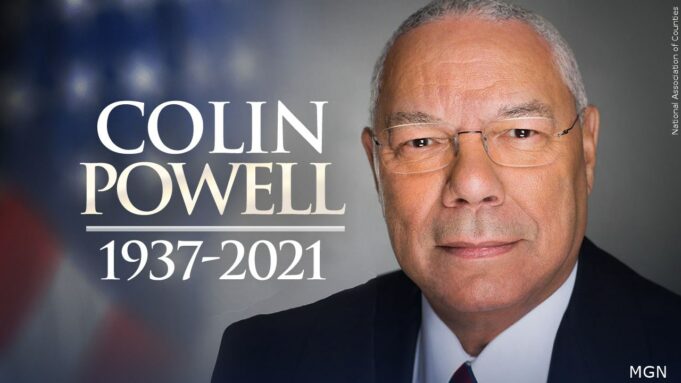 American leaders, media and admirers saluted and some mourned the passing of Colin Powell, the first Black chairman of the Joint Chiefs of Staff, former secretary of state and four-star general. The 84-year-old died from complications of Covid-19 at Walter Reed Hospital in Washington, D.C., according to his family.

“We have lost a remarkable and loving husband, father, grandfather and a great American,” said the family statement issued Oct. 18 on his Twitter page.

The statement said Mr. Powell “was fully vaccinated” and thanked the medical staff of Walter Reed for the care he received.

The Powell saga began in 1937 in New York City. He was born to immigrant parents from Jamaica and raised in the South Bronx. He was educated in New York City public schools, graduating from the City College of New York, where he earned a bachelor’s degree in geology. He also participated in ROTC at CCNY and received a commission as an Army second lieutenant upon graduation in June 1958.

He was a professional soldier for 35 years, during which time he rose to the rank of four-star general. He was made commander of the U.S. Armed Forces Command in 1989. His final assignment, from October 1989 to September 1993, was as 12th chairman of the Joint Chiefs of Staff, the highest military position in the Department of Defense. During this time, he oversaw 28 crises, including the invasion of Panama in 1989 and Operation Desert Storm in the Persian Gulf War against Iraq in 1990-1991.

His “Powell Doctrine” advocated U.S. military action if American national security interests were at stake, if overwhelming force was used, and widespread public support existed. He was the 65th United States Secretary of State, serving under Republican President George W. Bush. Prior to his appointment as secretary of state, Mr. Powell was the chairman of “America’s Promise,” the Alliance for Youth, a national nonprofit organization dedicated to mobilizing people to work to build the character and competence of youth.

“Colin Powell was a good man. He will be remembered as one of our great Americans,” said President Joe Biden in a statement.

Former President Barack Obama praised Mr. Powell as “an exemplary soldier and an exemplary patriot.” The nation’s only Black president said, “Powell helped a generation of young people set their sights higher. He never denied the role that race played in his own life and in our society more broadly. But he also refused to accept that race would limit his dreams, and through his steady and principled leadership, helped pave the way for so many who would follow.”

“He was a great public servant, starting with his time as a soldier during Vietnam,” wrote former President George W. Bush, who Mr. Powell served as secretary of state.

“Gen. Powell served this country with decency, integrity, & showed respect to everyone he encountered,” Rep. Barbara Lee, D-Calif., tweeted. Rep. Lee, a staunch opposer of the Iraq War, added, “May He Rest in Peace & Power.”

In nearly 50 years of public service, the statesman and military leader was a major influencer in U.S. foreign policy. Many lauded Mr. Powell, some called his loss tragic for America. Others spoke on his life and work in the dual reality of Blacks working in the system of their enemies.

“He is a demonstration of our genius and the theft of our souls,” said Omowale Clay of the New York-based December 12th Movement.

“I knew General Colin Powell personally. … Colin Powell stands out as a dedicated public servant,” said Dr. Benjamin Chavis, president of the National Newspaper Publishers Association, which represents Black-owned newspapers around the country. He felt Mr. Powell used his military position to advance the cause of Blacks in America and worldwide.

“He’s being hailed as a soldier, a statesman, a trailblazer, a trusted advisor,” said Wilmer Leon, political commentator and author. “But I believe the analysis of his life and his work is very contextual.” One must look at Mr. Powell’s record in the context of the Mai Lai massacre and cover-up in Vietnam, the failed coup in Panama in pursuit of Manuel Noriega, and Israel’s 2002 massacre of 52 Palestinians in a Jenin refugee camp where Mr. Powell—then secretary of state–determined there was “no evidence” of a massacre, said Mr. Leon.

Mr. Powell as secretary of state went along with President George W. Bush ordering the U.S. delegation in unison with Israel to walk out of the 2002 World Conference on Racism in Durban, South Africa. America was trying to avoid answering for its history of slavery after conference participants voted to recognize the Trans-Atlantic Slave Trade and slavery as crimes against humanity that warranted reparations.

Along with those lionizing Mr. Powell, others pointed out how his legacy cannot escape culpability in America’s global activity. “I think the blood of the Iraqi people will always be on his hands and a stain on his legacy,” commented Madea Benjamin of the pro-peace organization Code Pink. “He supported the wars from Vietnam through Afghanistan and Iraq which killed millions of people,” she added.

As America’s top diplomat in the George W. Bush administration, it was Mr. Powell’s trusted representation before the UN Security Council that claimed Iraq, led by President Saddam Hussein, possessed a secret chemical weapons program and was supporting terrorists after the September 11, 2001 attacks in America that killed 3,000 people. The weapons of mass destruction claim was a lie, which Mr. Powell later acknowledged publicly. In a September 2008 television interview Mr. Powell called his role a blot on his record, and “painful” that some U.S. intelligence officials knowingly misled him.

“There were some people in the intelligence community who knew at that time that some of these sources were not good, and shouldn’t be relied upon, and they didn’t speak up. That devastated me,” said Mr. Powell.

Antiwar activists and analysts reflecting on the time period disagree on whether he was out of the loop and deceived. In that major moment in the career of Mr. Powell, with his UN presentation in February 2003, he was a trusted messenger, the most trusted, as the Bush administration decided it planned to invade Iraq. Mr. Powell testified before the world that onetime U.S. ally Saddam Hussein had weapons of mass destruction. He was wrong.

Richard Becker, of the Answer Coalition, called the UN incident “a critical moment.” There was a huge anti-war movement and great divisions inside the U.S. ruling class about whether to go to war. After the war started, White House lies were made public and the Iraq invasion spiraled into a disaster, the narrative became the CIA, and Dir. George Tenet, bamboozled Mr. Powell about the weapons of mass destruction. “But the reality is that all the top officials were reading from the same playbook,” argued Mr. Becker.

It was not faulty intelligence, but a deliberately falsified story to win Americans over and gain popular support for an illegal war, he continued.

“The U.S. overthrow of Saddam ended the rule of a brutal dictator. But the power vacuum and lawlessness that followed unleashed years of sectarian fighting and chaos that killed countless Iraqi civilians, sparked a lengthy insurgency, and unintentionally tilted the balance of power in the Middle East toward a U.S. rival, Iran. No Iraqi weapons of mass destruction were ever found,” noted the Associated Press.

Ms. Benjamin said Mr. Powell could have built a record of speaking out against the recalcitrance of America and its unjust wars. She pointed to the antiwar record of Mr. Powell’s former chief of staff Lawrence Wilkerson, who has been challenging America’s foreign policy since leaving government, as an example.

As a military man Mr. Powell was a very capable, smart leader “badly used” by the George W. Bush administration in the lead up to the Iraq war in 2002, said Bill Fletcher, Jr., executive editor of GlobalAfricanWorker.com and past president of TransAfrica Forum.

“Even though he was later apologetic for the presentation he gave at the UN, that presentation was decisive in laying the foundation for the U.S. aggression,” Mr. Fletcher explained. “And that is unforgivable.”

“He was a great man, with whom I disagreed on almost everything,” added Mr. Fletcher.

Mr. Powell moved from military leader to statesman to influential leader on the political landscape. But he found himself out of step with his shifting Republican Party amid an intensifying race problem in the United States.

In the mid-1990s, Mr. Powell was called on to possibly run for president. At the insistence of his family, he backed off of the idea in 1995. Polls showed Democrat Bill Clinton easily beating Republican Bob Dole but losing to Mr. Powell by 15 points.

But for a match up against Mr. Clinton, he would have had to first win the Republican nomination. And it’s far from guaranteed that he would have been the nominee because of his moderate positions. The biggest “no” vote for a presidential run came from his wife Alma, out of fear her husband would be targeted for assassination.

“He was an anachronism,” according to Mr. Fletcher. “He was a so-called moderate Republican when the Republican Party had become anything but moderate and an increasingly right wing authoritarian party.”

The election of Barack Obama, America’s first Black president, came with a Powell endorsement, crossing party lines to endorse a Democrat, a Black Democrat, for president to the chagrin of many White Republicans.

As political, racial division grew and Donald Trump rose and was elected as a Republican president, Mr. Powell announced he was leaving the GOP because of Mr. Trump.

He branded Mr. Trump a “national disgrace,” and an “international pariah,” and condemned the billionaire businessman for leading a “racist” movement.

“The historic record takes us to a loyal soldier, a company man, protector of the empire,” said Dr. Leon.