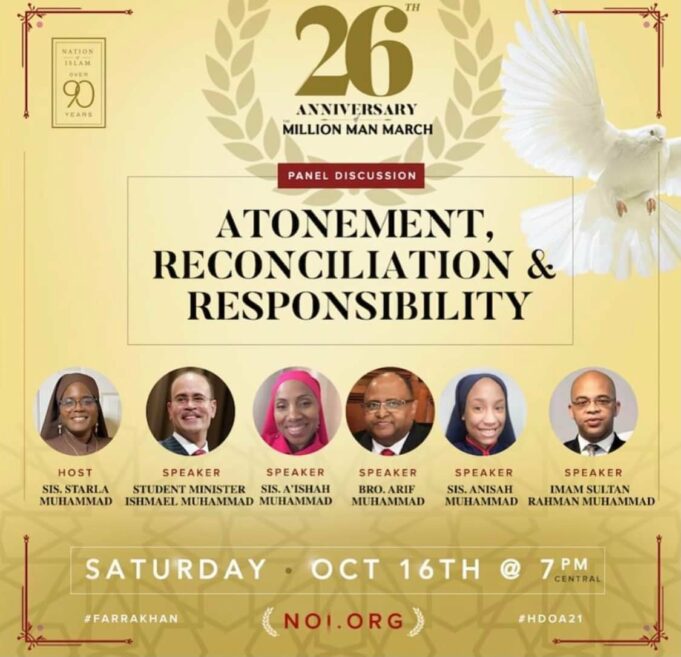 Twenty-six years ago, on Oct. 16, 1995, nearly two million Black men answered the call of the Honorable Minister Louis Farrakhan and gathered on the National Mall in Washington, D.C., under the theme of Atonement, Reconciliation and Responsibility.

“Atonement represents a message of healing, a message of mercy and grace from Almighty God Allah. So, we want tonight to focus on what the Honorable Minister Louis Farrakhan gave us 26 years ago that is worthy, that is a must for each and every one of us to reflect on and to begin to practice it, that we may have peace in our families, peace in the community, peace in our cities, ultimately, peace in the world,” said Min. Ishmael Muhammad.

He quoted from Surah 2, Ayat 160 of the Holy Qur’an, the Islamic holy book: “Those who repent and amend and make manifest (the truth), these it is to whom I turn (mercifully); and I am the Oft-returning (to mercy), the Merciful.”

In 1995, Abdul Arif Muhammad served as the Nation of Islam’s Mid-Atlantic Regional Minister. He worked out of Washington, D.C., the region’s headquarters, to mobilize and to ensure everything was in place for the Million Man March. He reflected on the day by reading a statement Minister Farrakhan published in The Final Call newspaper in October 2020 in recognition of the 25th anniversary of the Million Man March.

“The words that God inspired me to say have more value today than 25 years ago, when those words were spoken. They have more meaning, carry more power and more life today because practicing the principles that God brought through us that day will lead to a new and better people, a new and better America, a new and better world. It started from the capital of the United States of America on the Mall where we were once sold as slaves,” Min. Farrakhan said.

“Four hundred years later, we were on that Mall offering the highest level of civilization to our people, to America and the world.”

“So, punishment from God’s pestilence is to turn against you the things that you depend upon for your sustenance. The beauty of this day is what he gave us (26) years ago, atonement. It will heal us. It will still lift us. So, in this hour and in this time in which we live, we pray, Allah, that we recommit ourselves to those principles of atonement, reconciliation and responsibility.”

Black women played a large role in the success of the Million Man March 26 years ago. A’ishah Muhammad was one of those women who participated in the planning stages of the march, along with civil rights activist Dr. Dorothy Height, attorney E. Faye Williams and others.

“It was a gathering of women from all over this nation who pushed their men and sons and neighbors to participate. And I recall that we were walking from door to door, putting pluggers in doorways and handing them out on the street,” she said. “But we were that voice, that powerful voice behind our men that really, really pushed the men. Many of us have stories about putting our sons on buses and really threatening some of our men who thought that they might not go.”

She described the principles set forth that day as being applicable to women and the need for women to also atone to “our men, to our children, to our community.”

Imam Sultan Muhammad talked about atonement from an Islamic perspective.

“It was a demonstration that only God—as our dear Minister taught us on that day—could do to prove to the world that his Minister is a greater light to the world of man than Satan. So, the calling of nearly two million to the Mall in 1995 was a representation that many in the broad world of Islam did not necessarily understand fully,” he said.

He explained that repentance is part of Islam. “It is part of the cultures and civilization, the disposition of the believer, to be repentant. It is part of our reality so much that Muhammad, peace be upon him, 1,400 years ago gave a prescription to seek repentance 100 times a day,” Imam Sultan Muhammad said.

The listening and viewing audience posed several questions to panelists, including: how to approach atonement with someone who is not willing to atone; what is supposed to take place when you repent; how to help youth understand the importance and application of atonement; how to achieve perfect union if the world is not adhering to what God has asked us to do; how to reconcile differences with your mother if she is quarrelsome and unwilling to repent; how does one get back on the path of atonement after being thrown off by the pandemic; and how Black fathers can atone?

Anisah Muhammad shared how the message of atonement can be presented to young people so they can embrace it and see its value. She explained that Min. Farrakhan has called youth the “Joshua generation” but in that, it is important young people get closer to God. “So when we talk about atonement especially for me as a young person in what we call this Joshua generation, we have to develop this closeness with God and we can’t seem to do that without these eight steps of atonement that the Minister has established and laid out,” said Anisah Muhammad.

During his Million Man March address, Min. Farrakhan laid down eight steps of the atonement process: one, point out the wrong; two, acknowledgement of wrong; three, confess the fault, first to Allah and then to those offended; four, repentance, which is a feeling of remorse; five, atonement, or to make amends and reparations; six, forgiveness by the offended party; seven, reconciliation and restoration; eight, perfect union with Allah and with each other.

“He said to us that the first step is the most difficult, because nobody wants to be told they’re wrong. The ego of self is not receptive to criticism. The ego of self wants to always see oneself as being right,” Min. Ishmael Muhammad said. “So, it’s very difficult for someone to point out our wrong, especially if we see that person as being less or inferior to ourselves.”

He advised find the best way to approach someone, especially if the person is full of pride. If that fails, the next step, he said, is to seek a third party to point out the wrong. If nothing works, then you have to leave them “in their arrogance and their pride, blindly wandering on,” he said, referring to a part in the Holy Qur’an.

When asked a question on repentance, Abdul Arif Muhammad referenced Minister Farrakhan’s words, saying, “Repentance means you really feel sick, sorry for what happened. So if you do, then that means you would be pledging to yourself not to return to the like of that again.”

Imam Sultan Muhammad added, that the prerequisite for repentance and atonement is having sincerity and true regret. He also talked about letting go of any feelings of discord against the other person and against self.

In answer to a question on seeking atonement from unaddressed childhood offenses, A’ishah Muhammad advised people who have not learned the courage to confront the wrong to turn to Dianetics auditing, after prayer. Dianetics is a tool Minister Farrakhan introduced to the Nation of Islam to help Black people get rid of some of the mental traumas of past experiences.

“After you do that and then you’re able to go through it, it doesn’t have the same sting. It doesn’t resonate with you as much, and you may find that you don’t even need to address it,” A’ishah Muhammad said.

Min. Ishmael Muhammad also provided guidance, adding that some acts are so egregious and possibly unforgivable.

“If this has come into my life, it is only God, it is only Allah that can put my heart at peace and raise me up to see a circumstance from a vantage point and from a position that I otherwise cannot see without His help, that will calm what is in my breast, the anger, that will heal the wound that has been inflicted on me,” he said.

“The individual that has inflicted the wound is incapable of affecting the healing. Some of our traumas can’t be healed by the offender any more than the devil is in no position to heal us after the evil that he has done to us. It takes God.”

Imam Sultan Muhammad concluded by lifting words from Min. Farrakhan on atonement, reconciliation and responsibility. He said if those principles were acted upon, then peace, tranquility and love would be created, just as it was that day 26 years ago.

“It would create a spirit of love and unity that is so basic and necessary for the type of progress that could, would and must be made if only we atone, if we only reconcile first in our families and then in our communities and then accept the responsibility to make the change that we hoped others would make for us,” Min. Ishmael Muhammad explained.

To view the broadcast in its entirety, visit http://media.NOI.org