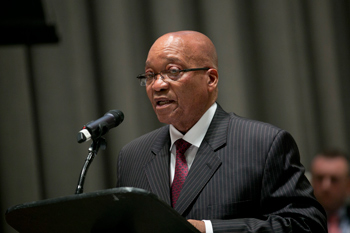 (GIN)—Former South African President Jacob Zuma has lost his latest bid to remain out of jail after refusing to respond to a corruption inquiry.

“The application for rescission is dismissed,” Justice Sisi Khampepe said as she read the majority decision, which included an order for Mr. Zuma to pay court costs.

It was the latest legal setback for the 79-year-old anti-apartheid veteran from the ruling African National Congress, whose presidency from 2009 to 2018 was marred by widespread allegations of graft and malfeasance. He denies wrongdoing.

Back in June, Justice Khampepe sentenced the former president to 15 months imprisonment in a ruling called one of the most prolific Constitutional Court judgments in the history of South Africa. Many saw the case as a test of South Africa’s post-apartheid ability to enforce rule of law, particularly against the powerful.

Mr. Zuma stayed out of jail until July 7, asking the court to revoke its sentence for contempt, arguing it was excessive and would endanger his health and life. His appeal was denied, and he finally turned himself over to police. Zuma’s supporters in the port city of Durban responded with fury, setting off some of the worst riots and looting in decades. More than 300 people were killed and thousands of businesses pillaged and razed.

President Cyril Ramaphosa called the violence a “failed insurrection.” Fueling it was frustration among the largely Black communities still living in squalid conditions long after the ANC swept to power in South Africa’s first democratic elections in 1994.

Zuma faces a separate corruption trial linked to his sacking as deputy president in 2005, when he was accused of taking bribes from a French arms manufacturer.

Mr. Zuma once said the party was more important than the nation itself, contending that it would govern South Africa until Jesus returned. And during his nearly nine-year presidency that was marred by scandal, corruption and mismanagement, ANC officials repeatedly rallied behind him as their leader.

In the end, though, his party turned against him, asking him to step down a full year and a half before the end of his second term and the country that had inspired the world with Nelson Mandela’s idea of peaceful reconciliation, and the continent with Thabo Mbeki’s vision of an “African renaissance,” would now be known for corrupt leadership and a wide range of thorny problems.