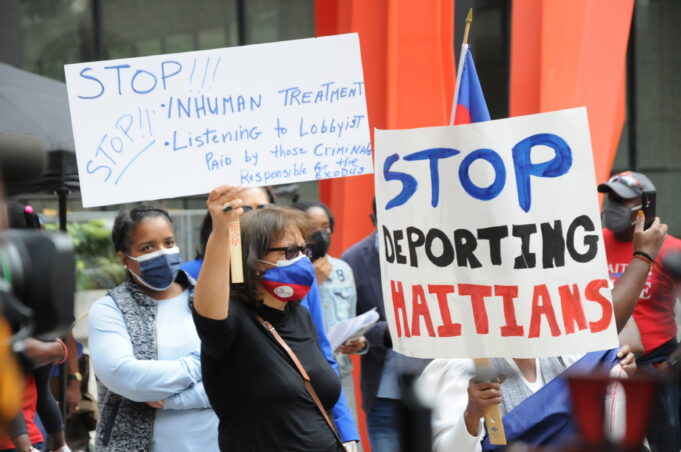 “The government only wants to pacify her once slaves with fancy false promises that she knows she cannot fulfill without the loss of friendship and bloodshed among her own people. But there is nothing like a good future in these rosy promises for the so-called Negroes.”

—The Honorable Elijah Muhammad, “Message To the Black Man,” 1965

When thousands of Haitian immigrants showed up on the Texas border with Mexico, the response was quick and brutal as images of U.S. Border Patrol agents on horseback whipping and driving into Black people exploded on the world stage.

Anger and outrage from Blacks came quick, especially as “their president,” Joe Biden, was doing and saying little, other than Haitians were unwelcome and using a Trump era policy to justify his heinous and illegal action under international law.

Is this your president, the one who claimed to have Black folks’ backs after we put him in office and the one who declared America was back?

Yes. America is back. But it’s the same old Black hating, brutal, bullying nation that she always has been.

The Black Alliance for Just Immigration laid out how the U.S. has forever denied Black migrants entry and has been especially hateful toward Haitians. “Black asylum-seekers have been seeking asylum in the U.S. by way of the U.S./Mexico border for over a decade. There was a dramatic increase in the number of Black asylum-seekers at the border—primarily Haitians—after the devastating earthquake in 2010. Thousands of Haitians fled their country and sought refuge in countries throughout the region, including Brazil, Venezuela, and Chile whose governments at that time were open to receiving them,” said the group.

“Dire political and resultant economic changes in those countries have forced Haitians who had escaped there to move again. This time, they head toward the U.S. Once again, thousands of Haitians were on the move, traveling through ten countries and eleven borders to seek asylum in the U.S. By 2019, African asylum-seekers joined the movement of Haitian and indigenous asylum-seekers in making the treacherous journey through jungles, rivers, and along the way experiencing police violence, detention prisons, rape and robbery.

With thousands of Haitians under a bridge between the United States and Mexico in Del Rio, Texas, in sweltering heat and risking life back and forth across the Rio Grande River to get food or basic supplies, the Biden administration response wasn’t compassion or care. It was denial of Black rights and the disrespect of Black life.

Is this your president?

As of Sept. 24, the area was declared vacant with thousands of Haitians shipped back to their suffering country, due in large part to U.S. meddling, interference and direct intervention into Haitian affairs for centuries. Some have also reportedly been allowed into the United States.

But Haitian suffering isn’t over: The Mexican government has stated loudly that while Haitians may have fled back to the country, they aren’t welcome there either.

The expulsions of Haitians continue despite demands from Blacks and Haitians in America that their country halt the practice. Where deported Haitians will go, how they will survive aren’t Biden administration concerns—just get them off of U.S. soil. “The expulsions and deportations are especially egregious because asylum-seekers are not granted a hearing before they are sent back to the terror and violence they fled,” added the Black Alliance for Just Immigration.

Is this your president?

“During the Trump administration, Democrats—including then-candidate Biden—harshly criticized Title 42 as a racist ruse designed to keep Black and indigenous asylum-seekers from making their claims to asylum in the U.S. Yet, the Biden administration has not ended Title 42; it has renewed it and continues to appeal federal courts that have found Title 42 unconstitutional,” said the Black Alliance for Just Immigration.

On the international level, the United Nations says: “Under international human rights law, the principle of non-refoulement guarantees that no one should be returned to a country where they would face torture, cruel, inhuman or degrading treatment or punishment and other irreparable harm,” the group said.

“We are absolutely outraged by the images of Haitians being herded and whipped like cattle,” said Dr. Ron Daniels, founder of the New York-based Haiti Support Project. “In the minds of African Americans, it conjures up traumatic images of water hoses turned on Black children in Birmingham and horses trampling protesters on the Edmund Pettis Bridge.”

“Despite outrage from people around the world, the Biden administration continues to violently deport and expel Haitians. In more horrific news, his administration is now seeking a private contractor to run a migrant detention facility at Guantanamo Bay with guards who speak Haitian Creole,” said the Black Alliance for Just Immigration on its Facebook social media page.

This is your president. The one you, Blacks in America, voted for in historic numbers. The man civil rights groups, preachers, politicians, celebrities, social media influencers, athletes, good, acceptable and even some “revolutionary,” and millennial activists declared was the only choice and asking any question was treason.

What say you about Biden’s great betrayal today or are you counting on us to forget? We promise you, by Allah’s (God’s) grace, we will not. We will uncover and call out your lies and hypocrisy. Sweet words, false promises, photo-ops, a Black vice president and a few jobs aren’t enough. With such backstabbing by our “friend,” Mr. Biden, who needs enemies? Or in your blindness, do you even know what a true friend looks like as devils fool and disgrace you?