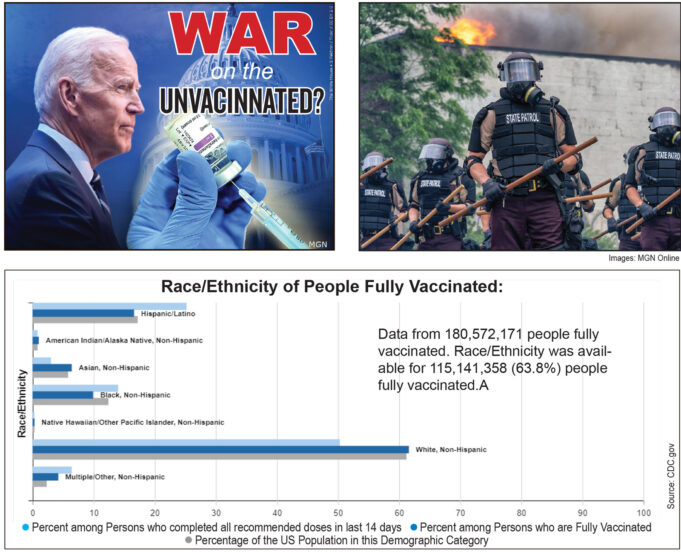 “I say it again, the Government of the United States of America is planning an assault on the Black community, specifically aimed at our youth. And the conspiracy is so deep and so diabolical that many of you will not even believe that at this very moment that I am talking to you, your lives hang in the balance.”

Recently, in the face of a “vaccine” that has been one of the greatest public policy failures of all-time, President Joe Biden stepped forth to take charge of COVID-suffering America. It did not matter to Mr. Biden that everything Pfizer, J&J, Moderna, Anthony Fauci, Bill Gates, and the media had promised the “vaccine” would do has turned out to be a pack of lies.

In his July 4th 2020 address, The Criterion, months before their deployment, the Honorable Minister Louis Farrakhan warned America and Africa to stay far away from the “vaccines”; to seek instead the emerging treatments and therapies that were showing remarkable success against the respiratory illness. Widely prescribed and safety-tested drugs and supplements already in existence—like Ivermectin, hydroxychloroquine/zinc, vitamin D3, and alpha interferon—had, by the time he delivered his Message, saved many lives.

In fact, Africa has successfully pursued The Minister’s prescient guidance. The artemisia-based remedy from Madagascar known as COVID-Organics, for instance, has had amazing results. Less than 1% of Madagascar’s 24 million people have been “vaccinated,” but that nation records only 957 total deaths from COVID-19 since the official start of the “pandemic.” The truth is that if America had followed Madagascar’s approach, the U.S. death toll would be just about 10,000. Instead, the “greatest medical system in the world” has amassed a stunning 662,000 deaths attributed to COVID-19, and over 14,500 deaths attributed to the COVID VACCINES!

The same can be said for nearly all of Black Africa, which has wisely spurned the killer “vaccine,” having suffered a long list of Tuskegee-like experiments at the hands of malicious medical missionaries. Only 1.6% of Africans have been tricked into taking the Pfizer or Moderna KMS (Kill • Maim • Sterilize) “vaccine,” yet the death rate from COVID-19 is so low it has alarmed and perplexed white Westerners. The African continent has nearly four times the population of America but only one third of COVID-19 deaths.

The pharmaceutical demons, intent on vaccine riches, have tried to pressure the Africans with threats of a “variant” resurgence, but our Black brothers and sisters there are not buying the ruse. Cases plummeted last week in Africa by 23% while America’s case rate continues upward! The overwhelming African success against “COVID-19” has been purposely concealed from the American people. For if they knew that the botched government handling of the crisis directly caused more than 90% of the COVID deaths, the January 6, 2021, attack on the U.S. capitol might be a daily event.

Instead of calling an emergency meeting of African public health leaders and begging them to share their solution to save American lives, the arrogant “Pharaoh” Joe Biden has doubled down on his blunder and demanded more of the same! He actually scolded unvaccinated (Criterion-intelligent) Americans, addressing them like plantation slaves:

“We’ve been patient, but our patience is wearing thin, and your refusal has cost all of us…. If you break the rules, be prepared to pay—and by the way, show some respect…”

Citing not one single health study, he went on to issue a threat to rob all federal workers of their livelihood: 75 days to get vaccinated or risk fines and firing. “The expectation is if you want to work in the federal government or want to be a contractor, you need to be vaccinated,” said Biden’s press secretary.

The Biden Administration’s pandemic policies have wiped out 22.4 million jobs and triggered the deepest recession in U.S. history. The unemployment rate shot up to 14.8%, the highest since the Great Depression. Median U.S. household income decreased 3% and 3.3 million more Americans have been forced into poverty. Yet Biden’s response to this epic catastrophe is to plunge America even deeper into vaccine hell.

An Israeli study has just found that “natural immunity confers longer lasting and stronger protection against infection, symptomatic disease and hospitalization [compared to] vaccine-induced immunity.” This means that the 80-100 million Americans who have had COVID-19 and recovered from it have far better protection from illness than the deadly Pfizer-failure could ever provide, even if it worked. Yet Biden has continued to ignore clear scientific evidence in pursuit of the diabolical vaccine agenda.

Why? By now it has finally dawned on ALL wide-awake human beings that the American government has no interest in their health at all. Humanity is witnessing and experiencing the final phases of the U.S. government’s long-term policy of depopulation—the systematic culling of the world’s “useless eaters” by 2-3 billion mostly indigenous people as a means to further enrich the wealthiest white people.

The mastermind of this extermination policy is 98-year-old Henry Kissinger, who may be responsible for more wars, coups, famines, and holocausts than any other white man. And for them the COVID-19 operation has already paid off handsomely. According to Forbes, U.S. billionaires have gotten about $1.2 trillion richer during the pandemic, a ginned-up catastrophe that has destroyed so many lives in so many ways.

Kissinger, as National Security Advisor, spilled the beans in his 1974 secret memo, advancing the position that controlling the strategic resources of Third World nations was directly linked to killing off those populations. President Ford adopted Depopulation as official US policy in November 1975 and since then every stratagem has been pursued to accomplish that objective.

The plan is that whoever the “vaccine” does not sterilize or kill outright will be imprisoned or otherwise controlled by an electronic handcuffing system that Bill Gates has been salivating to deploy. Once we understand that COVID-19 is a mass murder operation—not a health crisis—we can grasp why Joe Biden is a wickedly perfect puppet in his current leadership role.

There are 2 million people in the nation’s prisons and jails—a 500% increase over the last 40 years. Before finally snagging the presidency, Biden served in the US senate in ALL those years. During those two generations, he held key leadership posts and made critical policy decisions in the so-called War on Drugs. If there is a gatekeeper at the one-way prison door of Black America, it is Joseph Biden. According to a 2019 Vox article:

“As the head of the Senate Judiciary Committee in the late 1980s and early ’90s, Biden did not just support the war on drugs and mass incarceration; he wrote many of the laws that helped build a punitive criminal justice system. [emphasis added]. That included measures that enacted more incarceration, more prisons, and tougher prison sentences for drug offenses, particularly crack cocaine.”

Largely owing to Biden’s efforts, 63 percent of all those now incarcerated in state prisons for drug offenses are Black. Human Rights Watch found that there are five times more white drug users than Black, but Black men are incarcerated at a rate that is 13.4 times greater than that of white men. In at least fifteen states, they calculate, Black men are admitted to prison on drug charges at rates that are from 20 to 57 times greater than those of white men. One in every 20 Black men over the age of 18 is in state or federal prison, compared to one in 180 white men. In response to Republican criticisms that one of his bills protected criminals, Biden retorted that “we do everything but hang people for jaywalking.”

Of the Republican “get tough” crime bill he complained, “It doesn’t include enough police officers to catch the violent thugs, not enough prosecutors to convict them, not enough judges to sentence them, and not enough prison cells to put them away for a long time.” Just how many Black American lives and families did Biden help disintegrate with this satanic wickedness? Only Allah (God) knows. But as America’s COVID concentration camps are being readied for the “vaccine hesitant,” Biden has more than enough experience to find an effective means to incarcerate Americans who refuse the jab.

Who is best to arm police forces that will be activated to plunge these unknown “vaccine” chemicals into Black arms? Joe Biden, of course. He helped establish the Pentagon’s notorious “1033 Program”, which to this day provides weapons of war to America’s police—from the major cities to the tiniest rural country sheriff’s departments. Through the “1033 Program,” police were outfitted with bullet-proof Kevlar flak jackets, night-vision goggles, M-16 automatic rifles, drones, grenade-launchers, sophisticated surveillance equipment, helicopters, tactical Humvees, and Mine-Resistant Ambush Protected armored tanks.

Over 100 college and university campus police departments have used Biden’s “1033 Program” to acquire military-grade equipment. The appearance of this weaponry in the previously unknown city of Ferguson, Missouri, after the police murder of Michael Brown in 2014 finally brought attention to a hyper-militarized America. Ferguson police were better armed than “ISIS” in Iraq, which had supposedly overtaken two oil-rich countries in the Middle East with an army of Toyota pick-up trucks.

As Biden was launching his attack against Black America, The Honorable Minister Louis Farrakhan saw through the artifice. He warned our people, “…The Government of the United States of America is planning an assault on the Black community, specifically aimed at our youth. And the conspiracy is so deep and so diabolical that many of you will not even believe that at this very moment that I am talking to you, your lives hang in the balance.”

Black people listened to The Minister on July 4, 2020, and his message has played over and over here and around the globe. Black people have repelled the bio-attack from their own government, with an incredible show of unity and strength of conviction. As stated, the WHO reports that only 1.6 percent of Africans have succumbed to the toxic “vaccine.” And the CDC is now reporting that only 43 percent of Blacks in America have surrendered, and this wholesale “vaccine” rejection is why Mr. Biden had to make his appearance filled with threats of forced vaccination violence.

“Unvaccinated” Black people are proving themselves to be the wisest of Americans. Those who are now seeing the unprecedented death and damage from the “vaccine,” regret putting themselves and their families at risk for an experimental drug made by liars with no liability. Biden does not apologize for his, the media and Big Pharma’s lies—instead he demands that more Americans bare their arms for “boosters.”

Following the Minister’s Divine Guidance by resisting the “vaccine” has proven to be the winning choice for Blacks here and all around the globe. These are not the “vaccine hesitant.” They are the “Criterion Intelligent.”