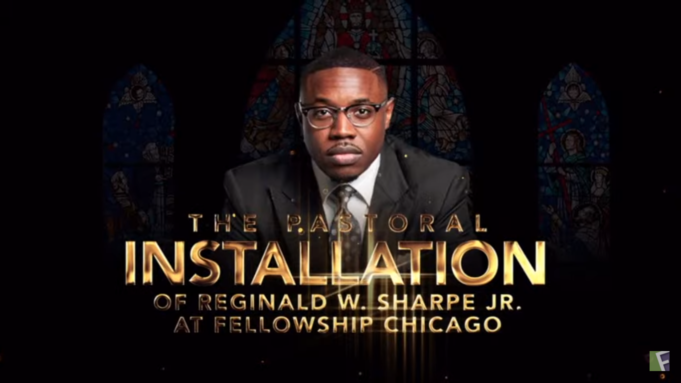 CHICAGO—Clergy from across the country were on hand for a spirit-filled installation ceremony for Rev. Reginald Wayne Sharpe, Jr., as senior pastor of Fellowship Missionary Baptist Church.

During a three-hour ceremony, speakers acknowledged the “big shoes” Rev. Sharpe would fill as only the third senior pastor to head the church since it was founded in 1950 by the legendary Rev. Dr. Clay Evans. Rev. Sharpe was designated as successor by current pastor of 20 years, Rev. Dr. Charles Jenkins.

Invited to speak by Rev. Sharpe, the Muslim minister offered well wishes to Rev. and Mrs. Jesse Jackson, both of whom are recovering from Covid-19, and acknowledged the years of Christian-Muslim fellowship he and Rev. Evans shared.

Min. Farrakhan, via Zoom, said a leader cannot become great until he or she learns to follow. He said Rev. Evans was a great follower and disciple of Jesus the Christ and “we want our new minister to pattern after the noble example in Rev. Evans.”

The Minister explained that his teacher, the Hon. Elijah Muhammad, the Eternal Leader of the Nation of Islam, wanted him to be a great minister and offered three principles to be aware of. Describing them as “three trials of ministers,” he listed the enticing beauty of women, lust for “filthy lucre” (riches gotten by dishonest means) and poverty.

The Minister said he was always careful as a young minister of accepting gifts from others. In a wicked society, the wicked want to use the man of God for a purpose that is not necessarily of God. If politicians see value in you, be careful that they don’t offer you something that will corrupt you in your ministry of Christ, he said.

“Sometimes they’ll give you a gift to gain some measure of control,” he warned his friend.

Regarding the lack of money, Min. Farrakhan explained: “When God tries you with poverty, that’s your big test. We didn’t come into the ministry to get rich … but if you minister well and go through the trials that every minister must go through, you will have the best that the world has to offer; and you’ll have the promise of the hereafter and the riches of the kingdom of God.

“We must do the work of being a good shepherd for the sheep, then God will bless you with all the things you may desire. Your greatest desire must be to make true followers for Jesus the Christ, and you cannot make anyone that which you are not,” he said.

In his Sept. 18 remarks, retiring Rev. Jenkins said his mentor, Rev. Evans, was an innovator. Rev. Evans was ostracized for allowing Dr. Martin Luther King Jr. to speak in his church and banks withdrew funding; he was kicked out of the Ministers’ Conference because he ordained a woman; and he was talked about because he allowed instruments for the church choir, Rev. Jenkins said.

He then laid the groundwork of what to expect in the role of pastor, telling stories that describe a pastor’s never-ending work as a shepherd. One time he was called urgently to his office to comfort a rape victim, while calming down the girl’s uncle who wanted to kill the offender and call the police. It all happened on a Sunday as he was preparing to preach.

The responsibilities are “more than meets the eye,” he said. “It’s one job with a whole bunch of hats at the same time.”

Rev. Jenkins said Hebrew words that describe shepherd include pasture, tend and graze. The pastor is responsible for the church environment of the sheep, meaning the experience must be conducive to the growth, health and development of the members, he said.

But the pastor needs help; there must be sheep that make sure the environment is aligned with the vision coming from the pulpit, he added.

To tend speaks to empowerment, he said. If the pastor is going to effectively tend to the flock, he must listen to God for instructions, listen to church leaders for insight and listen to the needs of the people for impact.

“The pastor is God’s action figure … God’s healer … God’s crisis counselor; he’s the shepherd who effectively serves on behalf of God Himself,” he said.

Vivian Sullivan, mother of First Lady Brianna Sharpe, advised her daughter to “be yourself and love who you are.” Spouses of pastors will be criticized, she said.

“Free yourself and be you. Don’t judge yourself by others’ standards,” she warned. “You are uniquely made, and God set you apart; therefore, shout out to God for the marvelous work God has done.”

Mrs. Sullivan told the first lady to take personal time to reflect on the past, rest in the present and refer to the future. Love and support your husband, she said.

“I truly believe God gave you the cream of the crop. It doesn’t mean there won’t be hard times. Cover your husband in prayer and protect him by how you communicate with others,” she said.