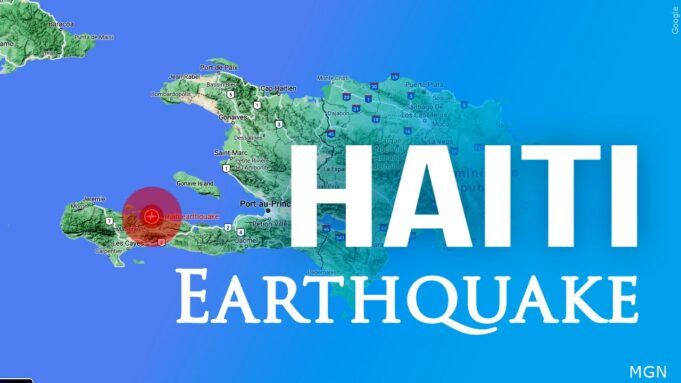 A shake-up has entered Haiti’s government, after Prime Minister Ariel Henry came under scrutiny by a top prosecutor who wanted him charged in the assassination of President Jovenel Moïse. The accusations have prompted high-level changes in the country’s cabinet, and calls for resignations, as the Caribbean nation also continues to recover a month after a devastating earthquake.

Port-au-Prince prosecutor Bed-Ford Claude, who was also investigating the president’s assassination, asked a judge to charge Mr. Henry with the crime, and also sought to have him barred from leaving the country, various news outlets reported. Mr. Claude cited evidence that Mr. Henry had twice communicated with a man believed to be the mastermind behind the assassination, former justice official Joseph Felix Badio, hours after it happened. Mr. Claude invited Mr. Henry to address these accusations, but Mr. Henry dismissed it as “political.”

President Moïse was killed, and his wife, Martine Moïse, was seriously injured, in an attack on his home in Port-au-Prince on July 7. Mr. Moïse was facing calls to step down, after governing by decree for more than a year after Haiti failed to hold elections. So far, more than 40 people have been arrested in connection with the assassination.

According to the Associated Press, the phone calls in question were made at 4:03 a.m. and 4:20 a.m. on the night of the assassination, saying that Mr. Badio was in the vicinity of President Moïse’s home at that time. Mr. Badio was fired as Haiti’s Minister of Justice in May. He’s now reportedly on the run.

Mr. Henry’s office addressed the allegations in a statement posted to an official Facebook page, saying in part, “That night, the Prime Minister received countless calls, of all kinds, from people who were worried about his personal safety when hearing the terrible news. It should be remembered that he had just been appointed prime minister, and after such a serious act, many of us wanted to inquire about his situation and the steps taken to ensure his physical integrity.”

The statement further said the office could not specify the names of everyone who called, or the nature of the conversations, since Mr. Henry could not take all the calls.

Mr. Henry terminated Mr. Claude and hours later, he was replaced. Reuters reports a letter from Mr. Henry to Mr. Claude said he was firing him for “grave administrative error.”  His firing has been called into question, with many asking, can the prime minister do that?

“No, he cannot,” said Dr. Jemima Pierre. She’s an associate professor of Black studies and anthropology at the University of California, Los Angeles, as well as Black Alliance For Peace’s Haiti/Americas Coordinator. She says only the president of Haiti can replace the top prosecutor. But the problem is, she says, Haiti doesn’t have a president.

Bloomberg reports Renal Luberice, Haiti’s secretary-general of the Council of Ministers, resigned. He tweeted about his resignation in French in a Sept. 15 tweet. Translated to English, he tweeted, “I do not intend to cooperate with a person named by Jovenel Moïse, accused in his villainous murder.” A day later, Mr. Henry inaugurated a new justice minister.

Mr. Henry was installed by Mr. Moïse, just days before his assassination. On July 20, Mr. Ariel claimed a “state of siege” and took over. In recent days, Haiti’s Office of Citizen Protection has demanded Mr. Henry to step down and has asked for the international community to stop supporting him. However, The Core Group, which is made up of ambassadors from Brazil, Canada, Spain, France, Germany, the European Union and representatives from the United Nations, released a statement in support of Mr. Henry’s efforts to form “an inclusive government.”

Ms. Pierre says this is who put him in his place. “The only way to understand Haiti right now is to understand that Haiti is not sovereign,” she said. “It‘s a vassal state of the U.S. and The Core Group. And so, from the very beginning, there’s no government in Haiti, there is an appointed prime minister that was forced into the people,” she said.

“[Mr. Henry] is set up there,” she continued. “They’re going to continue to support him, the same way that they supported Moïse, until they don’t want to anymore. They want him to basically stabilize Haiti. They want to stabilize Haiti based on what’s better for the U.S., and the international community, and it really is a puppet. He’s been a puppet.”

Joseph Makhandal, an attorney and Haiti representative for the Nation of Islam, says The Core Group is “a group of gangs” in support of chaos because it is “against the interests of the Haitian people.”

“The Core Group will not stand for a better Haiti for Haitians,” Mr. Makhandal said. “They will always adapt the policy of a Haiti that is in their control, for their benefit, and against the best interests of the Haitian people. So, it is not surprising that this Core Group composed of Europeans––some would obviously believe that they have good intentions, but in fact history has shown that they do not.”

A country in recovery

Haiti is not only recovering from the assassination of its president, but also an August 14 magnitude 7.2 earthquake, that killed more than 2,000 people and destroyed hundreds of homes. More than a month later, relief efforts continue. Cities in South Florida, including Miami, Davie and more, have organized drives to get products to Haiti.

In Texas, there are reports that over 10,000 migrants, largely Haitian, have crossed the Rio Grande in recent days. Many of them have come from Brazil and other South American nations. They are packed beneath a bridge in South Texas, as Border Patrol works to process them.

Mr. Makhandal says Haitians have been flocking to the U.S. border long before now, but these latest obstacles have not helped the issue.

“Unfortunately, Haiti has become a foreign nation to Haitians,” Mr. Makhandal said. “If you are at home, in your own country, shouldn‘t your country respond to your needs?” he asked.

“So when the state becomes anti its own people, then that state is a foreign state to the people,” he continued. “That unfortunately is a reality, and Haitians will continue to run from that state to seek higher ground, even though those high grounds, or so-called better grounds, are not necessarily welcoming to them, because some of the Haitian problems are coming from those grounds that they are seeking.”

In a recent press release, Black Alliance For Just Immigration is demanding the Biden administration grant humanitarian parole to Haitians and other Black immigrants and to immediately address the growing human rights catastrophe at the U.S-Mexico border.

“Almost 10,000 migrants from Haiti and elsewhere are currently camped under a bridge that divides the country from Mexico in Del Rio, Texas. The media is reporting that 20,000 more are expected in the coming days. The migrants are living in squalid conditions while Customs and Border Patrol (CBP) claim not to have the capacity to process asylum in a timely manner for these people in crisis,” the statement, released Sept. 17, said in part.

“We call on President Biden and his administration to move swiftly to avert any further delays that will lead to a bigger catastrophic event and immediately process those seeking asylum at the U.S.-Mexico border. While humanitarian parole is a temporary measure, it allows asylum seekers access to safer conditions as they await the backlogged asylum process,” the statement continued.