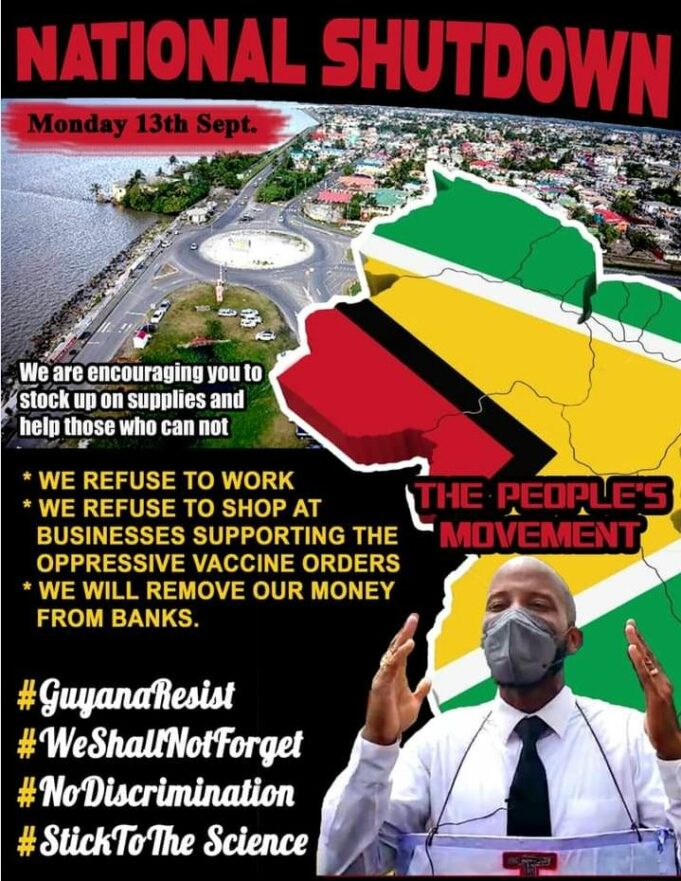 It is home to the largest, unspoiled rainforest in South America, yet this nation of just under one million is one of its poorest countries. Guyana, a former British colony which gained independence in 1966, is more than 30% Black with a heavy African and Caribbean influence.

On September 6 at 6 a.m., the people of Region 10 (Upper Demerara-Upper Berbice) launched a mass protest in opposition to mandatory COVID-19 vaccinations imposed by the government. It began with a 12-hour shutdown of public services and businesses in Linden, Guyana’s second largest city after its capital, Georgetown.

On September 8, the Guyana’s Teacher’s Union began a nationwide strike in front of the Ministry of Education in Brickdam, Georgetown. They had been locked out or removed from schools if they didn’t produce a vaccination ID or proof of a negative Covid test. The strike includes no online or face-to-face teaching.

On September 13, protests expanded nationwide to the country’s other nine regions. Participants refused to work, shop at any businesses supporting the oppressive vaccine orders and threatened to move money from banks.

The people’s rejection of the “vaccine” and their swift and fearless response to their government’s forced vaccination plot did not occur in a vacuum.

“The Honorable Minister Louis Farrakhan, on the Fourth of July (2020), in his monumental, historic speech, ‘The Criterion,’ had instructed us in the Nation of Islam, not to take their vaccines … We took it as a sort of group in Guyana to do the decent thing, which was to write both our president His Excellency (Irfaan Ali) and the Opposition Leader (Joseph Harmon/People’s National Congress Reform),” Dennis Muhammad, Nation of Islam Guyana Study Group Coordinator, told The Final Call.

Mr. Muhammad went on a strategic relentless drive and carried Minister Farrakhan’s Message to his people with twice weekly radio interviews in Region 10, where he resides. His efforts paid off. He, of course, was vilified by pushers of the vaccine for his part in widespread resistance to vaccinations.

“So, the record will show that the Nation of Islam was there for one year, talking about the dangers of vaccines. When the vaccination program rolled out, some were hesitant…. The rest of the community, looking on, basically did nothing at all. The imams, quiet; the pastors, very quiet. My [pharmacy] business was literally one time being singled out, because of my stance and position that I take, according to what my Leader taught me: that we should not take their vaccines,” stated Mr. Muhammad.

But through it all, he became stronger, elevated by Allah (God). “That was not a problem for me, because I understand from the Holy Qur’an that you will be tried with your person, your wealth, your business, your children; all of that will be a trial for you.”

By the time Guyana deployed its vaccination program on March 29, many people rejected it.

“Both the Opposition [party] and the Government of the day had an understanding that both of them will go to the people, and they will have the people take it. But the people themselves rejected. That’s important,” Mr. Muhammad explained.

The government and the People’s Progressive Party opposition leaders united to threaten and coerce the people to take the debilitating and deadly AstraZeneca/Oxford “vaccine.”

These extreme measures include requiring vaccination ID’s (so-called vaccine passports) for entrance to schools, hospitals, businesses, banks, even places of worship. Those who refuse to take the shots are penalized by having to undergo PCR nasal testing—at least three times a week, and they must pay the equivalent of $125.00 in U.S. currency for each test.

“[Minister Farrakhan] said that those that want to come and vaccinate us have a very wretched history; a treacherous history; a people that never treats us right,” stated Mr. Muhammad. “And a look into the history of [the Caucasian] reveals nothing ever seen where he set up a program to ensure that we are successful.”

“The solution to the Black man’s problem, Covid or not, is unity. The Honorable Elijah Muhammad said that our unity is greater than an atomic bomb,” Mr. Muhammad continued, emphasizing that he has pressed the call for unity in Guyana for a very long time.

“This country is in a mess! It needs cleaning up! Guyana needs all hands on deck, but all in all, when it’s all over, we should understand that even religion you cannot force on a man, much less a vaccine.” He referred to the language of the Holy Qur’an,

“ ‘There is no compulsion in religion’ meaning Allah (God) has made the righteous way clear and he has made the unrighteous way very clear, leaving it to you as the individual to make your choice. So how is it that vaccines, that cannot even come close to religion, how is that going to be mandatory?”

He encouraged Guyana’s leaders to set an example for the children. “Guyana is a great country, but the longer we take as leaders to get this done, and iron out the problems of this nation is the longer we will take to be a developed nation,” concluded Mr. Muhammad.

Unity was the key to their successful shutdown, according to Apostle Nigel London of C.O.R.E. Ministries International, who spearheaded the demonstration and had been standing with the nursing students, who were locked out of the Charles Roza School of Nursing, because they did not have a vaccination ID.

He said he is in agreement with Minister Farrakhan’s Message, and applauded Mr. Muhammad’s efforts in calling out those whose only concern is the wealth of Guyana, the oil and mineral resources (and gold) but not the people.

“Brother Muhammad is doing the right thing. How can you trust somebody who’s never done anything … they’ve never given us reparations and anything of that sort, but then they come and say they love us so much they will give, according to Biden…vaccines that are not even allowed to be used on U.S. citizens!?…

He (Biden) said unapologetically that the vaccine the FDA does not approve shall be sent to smaller countries, including Guyana. That’s what he said, and our government is saying we should take that which the U.S. is rejecting? Brother Muhammad deserves to be praised and commended highly. He’s standing resolutely. He’s speaking unapologetically. He is courageous. He continues to stand as a man, and we need those in our community,” continued Mr. London.

On September 2, Party President Irfaan Ali, of the People’s Progressive Party, stated the vaccines were not mandatory, but one day later, students were not permitted to enter the Charles Rosa School of Nursing without a vaccination ID. “What is worse is that these same people who are not yet certified, hence they›re not paid a salary as a registered nurse would be, are being told along with everybody that they must find $25,000 ($125 U.S.) to do PCR tests at an agency that the government will identify. And where will these young ladies find this money from every week or every three days?” argued Mr. London.

“You know that these measures of yours point to only one thing and that is that persons must be vaccinated …. or injected with a substance you call a vaccine. This is unjust, because to say that it›s not mandatory is just to save face, but if the actions prove it’s mandatory, the Guyanese are not stupid people. We can reason, and we can rationalize.”

The Upper Demerara/Berbice Leadership on Mandatory Vaccinations issued a joint statement on September 3, expressing deep concern about the dictatorial and discriminatory approaches and posture of the government in its handling of Covid-19 pandemic in the country and its mandatory vaccination policy on the citizenry.

It read, in part, “Many of Region 10 health care workers are denied access and entry to their places of work. This action has placed the health and safety of our region at severe risk of a greater and catastrophic health crisis than what currently obtains, hence being the lowest vaccinated region.”

Region 10 residents and leaders, during a virtual meeting on September 5, expressed outrage over both political parties’ efforts to especially target children with vaccinations and bypass parents.

“The educated are being denied the right to choose and now their children are being denied the right to an education, said Vanessa Kissoon, former member of Parliament. “What madness is happening? What are we expecting to produce in the future? Are we looking for that age group of children, those students now entering Fourth Form and those now headed into Fifth Form, are we looking for a rebellion? These are our young people that will have to take one day the leadership we all pass on.”