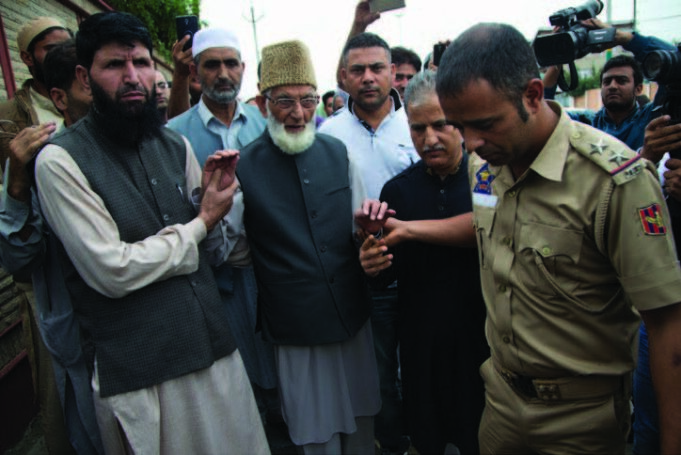 NEW DELHI—The death of a top separatist leader in disputed Kashmir and the ensuing crackdown on public movement and communications by Indian authorities have highlighted the turmoil seething just below the surface in the region.

Here’s a closer look at what Syed Ali Geelani meant to Kashmir and why problems still roil the region two years after India revoked its semi-autonomy and declared it a federal territory.

Why has this death struck a raw nerve?

For many in the region, Mr. Geelani was the face of Kashmiri resistance against India. To his detractors, he was a hard-liner responsible for stoking tensions in the region, a charge he had denied.

Mr. Geelani was part of the All Parties Hurriyat Conference, a conglomerate of various Kashmiri political and religious groups that was formed in 1993 to spearhead a movement for the region’s right to self-determination.

He never wavered from his position as a devoted proponent of the merger of Kashmir with Pakistan. This stance put him at odds with other moderate separatists who wanted to engage with New Delhi and local politicians who favored Indian rule in the region with internal autonomy.

Soon after the 92-year-old’s death late Sept. 1, authorities quickly clamped down, blocking internet and mobile phone services and restricting public movement out of fear of anti-India protests. Mr. Geelani’s family said his body was snatched away by authorities and discreetly buried without their consent.

Mr. Geelani’s death is expected to be a potential setback to the larger separatist movement in Kashmir, as his supporters may find it hard to find a successor with such towering popularity.

What is the status of Kashmir?

A flashpoint between India and neighboring Pakistan, both of which claim the region in full but rule only parts, Kashmir has been wracked with tensions for years.

In 1989, Kashmiri activists launched an armed revolt against Indian rule. Most Muslim Kashmiris support the rebel goal that the territory be united either under Pakistani rule or as an independent country.

New Delhi accuses Pakistan of sponsoring Kashmiri militants, a charge Pakistan denies. Tens of thousands of civilians, rebels and government forces have been killed in the conflict.

In 2019, hostilities peaked when Prime Minister Narendra Modi’s government stripped the region of its semi-autonomy and took direct control of the region amid a harsh security clampdown and communications blackout.

Anticipating a massive backlash and protests, authorities flooded the region—already among the world’s most militarized—with soldiers, and arrested thousands of young people, activists and pro-freedom Kashmiri leaders. Even pro-India politicians who favored Kashmir’s semi-autonomous status within the framework of the Indian constitution were also detained for opposing the decision but were later released.

By scrapping its statehood and separate constitution, India also removed inherited protections on land and jobs and opened up the region to Indians from outside to permanently settle, buy land and hold government jobs there.

The government said such a move would spur investment and bring more development to Kashmir. But critics and many Kashmiris fear this could dilute the region’s demographics.

What has happened in the last two years?

The situation on the ground remains tense. India’s August 2019 move deepened anti-India sentiment in the region. Armed militancy has continued to grow and gunfights between Indian forces and rebels have become more frequent. Even though many of those arrested two years ago have since been released, some remain in detention.

The move also dealt a blow to Kashmir’s economy, which was then hit once again by lockdowns to curb the spread of the pandemic.

The region has since remained without an elected government and under the direct control of New Delhi.

Last year, India held local elections, calling it a vital grassroots exercise to boost development and uproot corruption. An alliance of pro-India politicians who favor self-governance in Kashmir but oppose New Delhi’s recent policies won the election. They have since reiterated their demand that the 2019 decision be reversed.

Later in June, in an effort to counter criticism, Mr. Modi held a meeting with pro-India politicians from the region. The government dubbed it as an opening “to strengthen the democratic process” in the region, but the alliance leaders said they did not get any concrete assurances from Mr. Modi.

The region’s separatist movement has also been impacted in the last two years.

Among those detained in 2019 were numerous top separatist leaders. With many of them still behind bars, the movement’s presence on the ground has taken a hit. (AP)