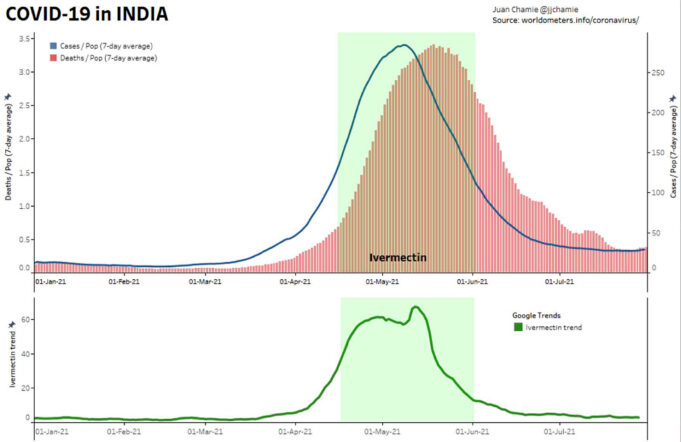 “They want to kill an entire people because we are the next inheritors of rulership over the planet. He, the enemy, already knows this. He knows our future but he doesn’t intend for us to see that future. He’s upset because we are rising.”

Just as doctors withheld Penicillin, the cure for syphilis, from those poor, Black Tuskegee victims, the corporate-controlled media, Dr. Fauci, Bill Gates and other genocidal demons depend on the people’s ignorance of treatments and cures for COVID-19 in order to hoax them into voluntarily taking a Pfizer/Moderna/J&J “vaccine,” now known to us as the ‘KMS” shot—Kill, Maim, & Sterilize.

So, they attempted to suppress knowledge of Ivermectin. Instead, the news of Ivermectin’s dramatic impact on hospitalization and death rates in countries like India and Mexico; its history of safety and effectiveness; the mountain of scientific studies that back it; has spread worldwide and demand for the prescription has skyrocketed.

The now desperate Food & Drug Administration (FDA) led by Dr. Janet Woodcock even resorted to a form of blackface minstrelsy—the kind of racist insult that used to draw a rebuke from the NAACP— to try to slow the growing popularity of the drug and mass rejection of the killer KMS “vaccine.” In a strange and condescending Tweet, obviously intended to scold the plantation slaves, the FDA’s top doctor wrote: “You are not a horse. You are not a cow. Seriously, y’all. Stop it.”

She was referring to Ivermectin’s use in veterinary medicine to stem parasitic infections in animals. It was a desperate ploy to make people think that using Ivermectin for COVID-19 is akin to humans eating Alpo or Purina Dog Chow. But this has backfired. Well-known drugs like penicillin, tetracycline, aspirin, and even opioids are also used to treat animals.

Further, the FDA, Fauci, Media, et.al., have tried to conceal a near miraculous decline in cases and deaths in India earlier this year, following a sharp spike attributed to the Delta variant, which originated there. The decline was immediately after that nation of 1 billion people introduced Ivermectin and Hydroxychloroquine to protect and treat its citizens for COVID-19. On July 30, 2021, the New York Times reported that the sharp plunge in COVID-19 cases was a “mystery with no clear explanation.” Wrong. The explanation is quite clear! The “sudden” drop took place within weeks of a new protocol which included Ivermectin for early treatment of the virus.

Woodcock’s vicious and ignorant attack on Ivermectin only highlights her own history of bad—very bad—medical advice.

This same Dr. Janet Woodcock appeared to be protecting the opioid manufacturers, and many in the field of public health opposed her appointment to the FDA in 2021. According to a Guardian article:

Groups fighting the US opioid epidemic have called on Joe Biden to appoint a new head of the Food and Drug Administration (FDA) after describing the acting commissioner as unfit for the post because of her part in the mass prescribing of painkillers that have caused hundreds of thousands of deaths.

28 groups accused Woodcock of presiding over “one of the worst regulatory agency failures in US history” as head of the FDA department responsible for approving new prescription opioids. They charged Woodcock with “dereliction of duty” and “willful blindness” in putting the interests of opioid manufacturers ahead of public health, often overruling the FDA’s own scientific advisors and ignoring the pleas of public health groups. The Guardian reports that the pharmaceutical industry “enthusiastically supports Dr. Woodcock’s candidacy for FDA Commissioner.”

This is the person who now tells us to avoid Ivermectin?! With an opioid death count of 500,000 mostly white people, what is Woodcock’s and Biden’s “vaccine” plan for Blacks?! Seriously, y’all.

The fact is that the demand for Ivermectin and rejection of KMS “vaccines” is based on the growing medical intelligence of the American people, most of whom gained knowledge of the drug’s potential in a viral video of the Dec. 8, 2020, Senate testimony of Dr. Pierre Kory, which we excerpt below.

Senate Democrats, including the now vice president Kamala Harris, boycotted the hearing in which the world actually heard evidence of a potential cure for COVID-19. To date there are now over 40 medical trials using Ivermectin in fighting COVID-19.

“I want to start out by saying that I’m not speaking as an individual, I’m speaking on behalf of the organization that I am a part of. We are a group of some of the most highly published physicians in the world. We have near 2,000 peer-reviewed publications among us, led by Prof. Paul Merrick, our intellectual leader, we came together early on in the pandemic and all we have sought is to review the world’s literature on every facet of this disease, trying to develop effective protocols. We have done nothing but try to figure out how to identify a repurposed and available drug to treat this illness.

We have now come to the conclusion, after nine months, and I have to point out, I am severely troubled by the fact that the NIH, the FDA and the CDC, I do not know of any task force that was assigned or compiled to review repurposed drugs in an attempt to treat this disease. Everything has been about novel and/or expensive pharmaceutically engineered drugs, things like Remdesivir and antibodies in vaccines.

And I’m here to tell you that we have a solution to this crisis. There is a drug that is proving to be of miraculous impact. When I say miracle, I do not use that term lightly and I don’t want to be sensationalized. That’s a scientific recommendation based on mountains of data that’s emerged in the last three months.

Mountains of data have emerged from many centers and countries around the world, showing the miraculous effectiveness of Ivermectin. It basically obliterates transmission of this virus. If you take it, you will not get sick.

I want to briefly summarize the data:

•We have four large randomized control trials totaling over 1,500 patients, each trial showing that as a prophylaxis agent, it is immensely effective; you will be protected from getting ill if you take it.

•In early outpatient treatment, we have three randomized control trials and multiple observation as well as case series showing if you take it, the need for hospitalization, and death, will decrease.

•The most profound evidence we have is in the hospitalized patients. We have four randomized control trials there, multiple observation trials all showing the same thing: you will not die, or you will die at much, much, much lower rates, statistically significant, large magnitude results if you take Ivermectin.

It’s proving to be a wonder drug. It has already won the Nobel Prize in medicine in 2015 for impacts on global health in the eradication of parasitic diseases. It is proving to be an immensely powerful anti-viral and anti-inflammatory agent.

Please recognize, peer review takes time. It takes months, we do not have months. We have 100,000 patients in the hospital right now dying. I’m a lung specialist. I’m an ICU (intensive care unit) specialist. I’ve cared for more dying COVID patients than anyone can imagine. They’re dying because they can’t breathe. They’re on high-oxygen delivery devices, non-invasive ventilators or sedated and paralyzed and attached to mechanical ventilators that breathe for them. And I watch them every day. They die. By the time they get to me in the ICU, they’re already dying, almost impossible to recover.

Early treatment is key. We need to offload the hospitals. We are tired. I can’t keep doing this. …Any further deaths are going to be needless deaths, and I cannot be traumatized by that. I cannot keep caring for patients when I know that they could have been saved with earlier treatment and that drug that will treat them and prevent the hospitalization is Ivermectin. This is—I am here today, I am calling to action, the NIH…

I want to be clear. I am not here as a politician, or the dramatist, or sensationalizing what I am recommending…..We have almost 30 studies, every one is reliably and reproducibly positive, showing the dramatic impacts of Ivermectin. Please, I am just asking that they review our manuscript. It’s serious, and by serious highly experienced physicians and researchers. We have —I cannot call on more credibility than we have, we’re not just a random doctor who’s saying we have a cure. I don’t want to say I have a cure. I’m just asking, review our data. We have immense amounts of data to show that it must be implemented and implemented now.

Senator, the last thing I want to say is, you know who’s dying here? It’s our African-American and Latino and elderly. It’s some of the most disadvantaged and impoverished members of our society. They are dying at higher rates than anyone else. It’s the most—severe discrepancy I have seen in my medical career and we are responsible to protect those disadvantaged members. We have a special duty to provide countermeasures. The amount of evidence to show that Ivermectin is life-saving and protective is so immense and the drug is so safe, my colleagues have talked about it, it must be instituted and implemented. I am asking the NIH to review our data and come up with the recommendations for society. Thank you.