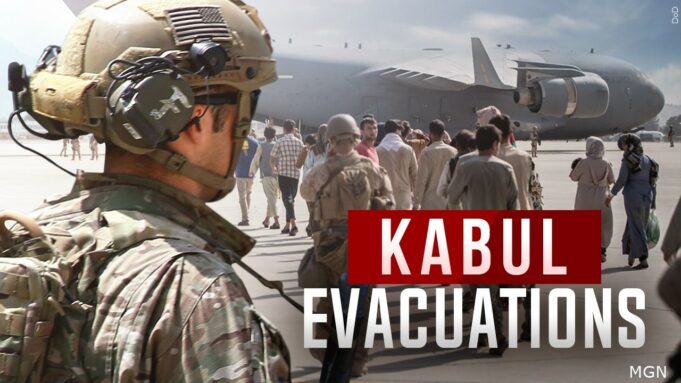 Even as the United States sought to exit Afghanistan, the horror of violence and war followed her. Things do not portend well for the future, nor justify the trillion dollars and lives lost in a senseless military adventure.

No matter where she turns, America cannot win: Anger and hatred continue to rise in the Middle East. Allies are disgusted and question her commitment to honor her promises and security guarantees. At home, there is political acrimony, distrust, disappointment, and division even as the latest young soldiers to lose their lives in a two-decade disaster were mourned.

Violence and killing re-escalated between the U.S. and militant groups after a suicide bomber detonated explosives at Hamid Karzai International Airport in Kabul. It killed 13 U.S. servicemen and some 200 Afghans during a mass evacuation of Americans, Afghans who sided with the U.S. and others desperate to leave the country.

In retaliation, America conducted drone strikes targeting the Islamic State Khorasan (ISIS-K), which claimed responsibility for the airport assault. On Aug. 29 another drone strike resulted in the death of a family, including children.

U.S. military forces had pulled out, taking U.S. citizens, green card holders and others by an Aug. 31 deadline. The ruling Taliban had said they wanted the U.S. out and ISIS-K has vowed to keep attacking the Taliban, who they condemned as off the path of Islam for negotiating and coordinating exit operations with the U.S., and Americans.

In a press briefing, a White House spokesperson pledged Aug. 30 that the U.S. would continue to get Americans and those who worked with the United States out of Afghanistan even after troops left. At the briefing, it was noted that some Americans, their Afghan allies, and others would be left behind after the pullout deadline.

The U.S. commander over the military mission declared the operation ended in a press conference Aug. 30 that aired over CNN just after 3:30 p.m. CDT. Seventy-nine thousand civilians, including 6,000 Americans, were evacuated, said Gen. Kenneth McKenzie. The diplomatic mission will continue, he said.

The White House said efforts to get those remaining out through partners in the region would continue, and the Taliban has made public statements that Afghans will be allowed to leave. It was unclear, however, how those things would happen at Final Call presstime. Fewer than 250 Americans may remain who want to leave Afghanistan, according to reports the day before the withdrawal deadline.

The current loss of life and likelihood of more death follows a 20-year war that started after the bombing of the World Trade Center in New York. Then-President George W. Bush accused the Taliban of sheltering Osama Bin Ladin, al-Qaida, and those he insisted were responsible for the tragedy in the Big Apple. The U.S. unleashed a devastating air campaign before sending in ground troops.

America’s assault was doomed from the beginning and the Honorable Minister Louis Farrakhan told the president and U.S. government that the war would not be won.

“There are times in history when men of conviction go against the tide of world thought and opinion, bringing suffering upon themselves to establish a new truth or a new idea. However, this is not that time for you,” wrote Minister Farrakhan in an October 2002 letter to President George W. Bush. The Minister has continually warned the U.S. against constant warmongering and interference in other nations. He has told the United States to stop war-making and to exit the Middle East before a final cataclysmic battle, the War of Armageddon prophesied in the bible, explodes and ushers in the final destruction and fall of America.

The horrendous images of the airport bombing were bloody, painful reminders of America’s disaster in Afghanistan.

“I just think the more we meddle in other people’s business, the more problems we cause,” said Barry Landendorf of Veterans for Peace. Mr. Landendorf agreed with America’s withdrawal from a war that should have never happened. But he questioned how the withdrawal was done. “Before you evacuate the troops you start moving the American civilians out … identify Afghan folks who were collaborating with the U.S., bring them out,” but not in a public way, he said.

Everywhere America turns she seems to be beset by enemies and is dependent on a longtime enemy, the Taliban, to accomplish some things.

The U.S. is hated by ISIS-K, which the Institute for Economics & Peace’s Global Terrorism Index calls one of the world’s top four deadliest terrorist organizations.

ISIS-K sees the Afghan Taliban as strategic rivals and “filthy nationalists” whose ambitions are only formation of a government confined to Afghanistan, said experts. The Islamic State goal is establishment of a global caliphate.

“It is still too early to tell how the U.S. withdrawal from Afghanistan will benefit ISIS-K, but the attack on the Kabul airport shows the continued threat posed by the group,” said Amira Jadoon, a terrorism expert at West Point Academy, and research fellow Andrew Mines of George Washington University’s Program on Extremism in an interview with The Conversation.

“In the short term, ISIS-K will likely continue its efforts to sow panic and chaos. And demonstrate that the Afghan Taliban are incapable of providing security to the population,” Mr. Mines said.

“I think it was important that Biden decided to stick to the deadline at the end of the month,” said Medea Benjamin of the pro-peace organization Code Pink. “I also think it’s important to leave because the Taliban has told us to leave.

“And that could lead us into another round of war in Afghanistan,” Ms. Benjamin stated. The longtime activist said it’s terrible the way things turned out in the end.

As the U.S. disentangles itself militarily, “we also have to maintain a sense of responsibility towards the people of Afghanistan whose lives we helped immiserate during 20 years of war,” Ms. Benjamin said.

An economic squeeze was applied as the Taliban gained control of Kabul, Afghanistan’s capital. Western powers, including the U.S. and Germany, the World Bank, and the International Monetary Fund “all ganged up” and suspended Afghan foreign aid. The IMF withheld $450 million of funds allocated for Special Drawing Rights that can be exchanged for U.S. dollars, euros, Japanese yen, Chinese yuan, and British sterling. In 20 years of occupation a thriving economy was never built.

“This kind of economic warfare is something that the U.S. under bipartisan administrations has continued against governments we don’t like,” said Ms. Benjamin. “But the ones who are hurt are the ordinary people.”

Asked if withdrawal marks the end of America’s meddling in Afghanistan, Ajamu Baraka, national organizer for Black Alliance for Peace said it doesn’t have to be. He argued the Taliban are not radical. Under the Taliban, Afghanistan can still be a “Western-oriented capitalist economy,” he said.

“The U.S. has the ability to have some influence over that emerging state if they are wise,” continued Mr. Baraka. “But because these are White supremacist colonialists, their pride has been hurt.”

He predicts America will still be a disruptive player, covertly fostering opposition against the Taliban, perhaps through historic allies like the Northern Alliance, a militia that once worked with the U.S.

The void left in Afghanistan is also drawing China and Russia in their pursuit of economic expansion and influence. Afghanistan has rare earth resources like lanthanum, cerium, neodymium, and veins of aluminum, gold, silver, zinc, mercury, copper, and lithium. Many of these rare resources are needed in everything from electronics to electric vehicles, satellites, and aircraft.

Hours after the Taliban overran Kabul, a Chinese foreign ministry spokeswoman said Beijing was ready for “friendly cooperation with Afghanistan.”

An Aug. 17 CNBC article said China is especially interested in Afghanistan rare earth metals estimated to be worth between $1 billion and $3 trillion in 2020.

“The United States is moving away from the Middle East and Central Asia in order to assemble more forces for what they see as a big war against China,” reasoned Mr. Becker.

Republican lawmakers have complained Biden administration actions could lead allies to doubt America would come to their aid if necessary.

“To make it very simple, the question is, will our allies still trust us, and will our enemies still fear us? I think that’s an open question,” Rep. Steve Chabot (R-Ohio) told Fox News Digital.

He said for 20 years America hadn’t suffered another 9/11 but this has been a tragic blow because the administration handled “this careless pullout” with no plan.

For neighboring countries America’s Afghan debacle and the fall of Washington’s puppet government caused major cross border humanitarian and refugee concerns as well as weariness with U.S. inconsistent and—at times—unclear policy. The United Nations agency for refugees estimates that 90 percent of 2.6 million Afghan refugees outside of the country live in neighboring Iran and Pakistan.

Both countries also host many Afghans who migrated for better economic opportunities. By comparison, over the last decade 630,000 Afghans applied for asylum in European Union countries. The largest numbers being in Germany, Hungary, Greece, and Sweden, according to EU statistics. The United Nation’s Security Council also passed a resolution calling for the opening of a humanitarian route to the airport and allowing people to leave Afghanistan.

America has continued to face and use force: The Defense Dept. confirmed missiles aimed at the airport were shot down in the early hours of Aug. 30. Officials also said a drone strike destroyed a vehicle carrying arms or bombers targeted at Americans in a Kabul neighborhood. The attack and a subsequent explosion killed 10 people, including children, said media reports.

Pentagon and White House officials have stressed the U.S. retains the ability to use  “over the horizon missions” where airstrikes or drone strikes can be launched from other countries against perceived enemies in Afghanistan.

In his book, “The Fall of America,” the Most Honorable Elijah Muhammad, Eternal Leader of the Nation of Islam, described how the United States was reaping what she has sown and losing friendship with other nations.

“America has done the worst work of deceiving other peoples and making false friendships with them,” wrote Elijah Muhammad. “Now her time has come. No one wants to trust her for friendship, for she has deceived many nations,” He continued. His words foretold the story of U.S. defeat and confusion in Afghanistan.

The 20-year war was America’s longest. It grew increasingly unpopular and costly in blood and treasure with no perceivable gain.

Washington spent $2.26 trillion according to figures compiled by the Cost of War Project at Brown University’s Watson Institute of International and Public Affairs. The mammoth figure doesn’t include funds obligated for lifetime care to injured vets nor future interest payments on money borrowed to underwrite the war, said the Project’s website.

The Project estimates that 174,000 people died in Afghanistan as a direct result of the war. Over 6,000 Americans, soldiers, private contractors, over 100,000 Afghans and scores of NATO-allied soldiers died.

For America the defeat was déjà vu, redolent of its war in Vietnam during the 1960s and 1970s.

“Those who fail to learn the lessons of history are doomed to repeat them,” Min. Abdul Akbar Muhammad, international representative of the Nation of Islam, said in an interview. America was warned that she would never win a war in Vietnam where she subsequently lost 58,000 soldiers and the conflict.

“America arrogantly went in and lost that war because they would not listen to sound advice,” said Min. Akbar Muhammad. He pointed out that America, like Britain and the Soviet Union—past losers in Afghanistan—was told the Afghan people would never stop fighting.

“They were warned Afghans would fight to the end because in their belief system no foreigners should occupy their land,” he said.