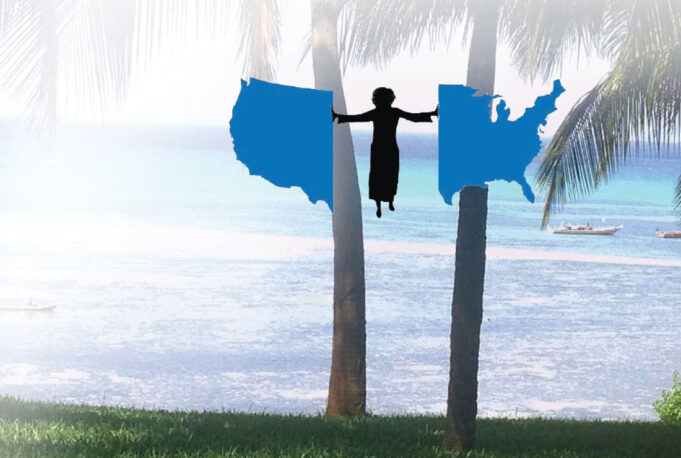 Raised by a single Black father in South Central Los Angeles, Phelena Jean was a juvenile delinquent, high school dropout and on track to being a “gangbanger’s baby mama” when she transferred to a historically Black college and changed the trajectory of her life. Through the HBCU, she was able to have her first study abroad experience. She has since traveled to over 40 countries and is now helping other Black people, Black women in particular, to get out of America.

Propelled by a painful divorce and the disrespect experienced at her job, Ms. Jean decided to get out of what she calls the “Divided States of America.”

He also taught that it is time for the separation between Black and White.

After 10 years of living outside of the United States, the seasoned traveler, educator and entrepreneur is hosting the “Get The F Out Of America: The Blueprint” conference at Clark Atlanta University, Oct. 2-3.

“It’s really a call to action for Black women in particular to look at other options for living a healthier and wealthier life outside the confines of the United States,” Ms. Jean said.

Her organization, Black Broads Abroad, is partnering with the college to put the event on. Over the course of two days, 15 panelists will cover 12 workshop sessions. Topics include how to create location-dependent income, international real estate investment and leveraging Airbnb spaces to generate income, parenting overseas, starting a business overseas, how to maximize the U.S. dollar in an emerging nation, best places to live in Africa, dispelling myths about living in the Middle East and dating abroad.

The first country Ms. Jean moved to was Brazil.

“A lot of people ask what made you leave in the first place? If I’m to be very candid, everybody had me f’d up: the country, the United States, my ex-husband and my job. And at a friend’s urging, she was like you just need to go on a vacation, because I hadn’t traveled in a while. She was like, just go on a vacation,” Ms. Jean recounted. “And so I had been watching Henry Louis Gates’ PBS special ‘Black in Latin America.’ There was something so compelling and magical about Salvador, Bahia specifically, and it was just beckoning me.”

Six weeks before her trip, she decided she would move there, and she quit her job. She lived there for about a year, which allowed her to learn about geoarbitrage, which is related to moving to a location to lower your cost of living while still having the same income and lifestyle. Since then, she has taught the royal children of Qatar, has lived in Korea and has worked as a real estate investor in South Africa. Her newest location is Mexico, where she moved in July.

Ms. Jean is a Pan-Africanist and has been to about 12 African countries in total.

“My motivation is primarily to get Black people to move to Africa and the Diaspora particularly, but I want us to know that there are other options that are available as well,” she said.

She has been to majority East African countries: Rwanda, Tanzania, Kenya and Ethiopia. She’s also been to Lesotho, Botswana and Eswatini, also known as Swaziland, all of which are located in Southern Africa.

“I would say the easiest African country to transition to as a Western-identified Black person is South Africa. It’s very akin to the United States. The infrastructure is amazing. It has all of the Western amenities,” she said. But she said several cities in South Africa also have a similar level of criminality as U.S. cities, especially Johannesburg, which she said is like North Philly or Detroit.

“Tanzania is pretty developed as well. I see a lot of African-Americans expatriating there, especially since the pandemic because their visa situation was like, they were pretty open for everybody to come in,” she said. She pointed to the cities of Zanzibar and Dar es Salaam as easier transitions for people who want to have the same level of comfort as their home in the U.S.

“Botswana is actually rather developed, and I think that’s a good country to transition to as well. And it’s a very safe country,” she added.

She said she wishes Black people knew how beloved they are all over the world.

Ms. Jean described how as a Black American woman, she is treated as well as a wealthy White woman when she lives overseas.

“There are opportunities that you can exploit being a Black American because we are so beloved. Your status is automatically venerated being an American and then being a Black American on top of that,” she said. She also mentioned that while in other people’s countries, it’s important to have humility and to not be disrespectful.

For Black people who want to move outside of America, Ms. Jean said the first step is as easy as buying a ticket. But she did share some other things to be mindful of. Some of that includes researching the political climate, currency conversion, type of food supply, transportation and whether the area is densely populated or in a rural area.

“When I moved to Brazil, it was very important to me at that particular time that I live in a Black country or a Brown country where I could blend in, and I wanted my dollar to go very, very far. So looking at the currency exchange rates is very important, looking at the demographic makeup of the country,” Ms. Jean said. “Are you okay with being the only fly in the buttermilk, so to speak. I lived in Korea for about a year, and it was a very homogeneous society, and it was quite challenging. So, you do want to research those things.”

“But the most important thing: If you don’t like it, you can leave,” she continued.

Ms. Jean grew up as in a “Black radical family” in South Central Los Angeles. She’s not affiliated with the Nation of Islam, but she said the Nation was a part of her upbringing, and her father used to have tapes of the Honorable Minister Louis Farrakhan of the Nation of Islam.

In line with his teacher, the Honorable Elijah Muhammad, Minister Farrakhan taught that “everywhere the White man may be, even in Europe, the earth belongs to the Black man.”

“We have in our song, our fight song in the Nation of Islam, a line that says the earth belongs to the righteous. And so, the Honorable Elijah Muhammad taught that the entire planet earth is the home of the Original Man and that the Original Man is the Asiatic Black man and woman,” said Memphis-based author, researcher and Student Minister Demetric Muhammad.

“And so many of our people who sat under his voice, who sat under the voice of the ministers who have been touched by the ministry of the Honorable Minister Louis Farrakhan, have yearned for an opportunity to travel abroad. And his mighty teaching and wisdom are put within the heart and mind, so many in the Black community have a love for Africa, a love for Asia.”

He attributed the drive of Black people to relocate and travel abroad to two primary factors: the awakening, or the mental resurrection of Black people, and the lack of justice, which he said produces a yearning for liberation.

He described Black people actively seeking an existence away from White people as an extraordinary sign.

“And so as that thought is in the minds of people, then the thought and the desire and the will begins to grow among Black people to be separate from our 400-year-old oppressor, and then all you have to do is have the opportunity,” he continued. “You begin to see more and more and more of a conscientious effort to bring about what it is that God desires, and that is that we be separated.”

For more information on the conference “Get the F Out Of America: The Blueprint” and for ticket prices, visit GTFOofAmericaBlueprint.com.