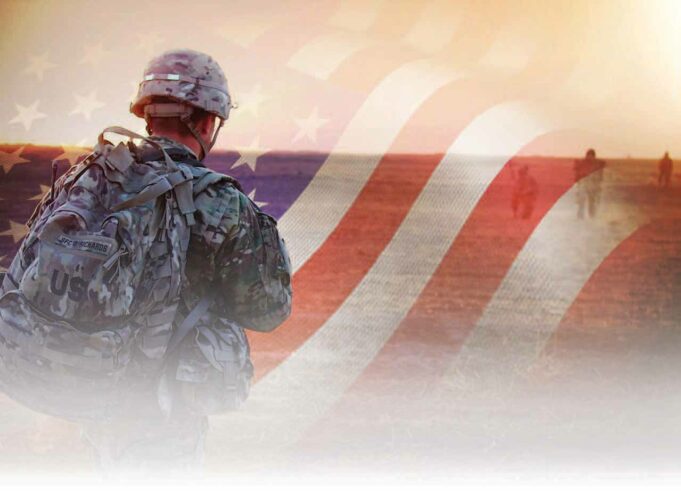 [Editor’s note: The following article is based on excerpts from an address delivered by Minister Farrakhan on July 22, 1985. But with the United States losing power and prestige on the world stage today, his words provide insight and guidance that is needed today.]

America’s loss of control is a sign of the decline of her world. This fall can be checked, if America would believe in the warnings given by the Honorable Elijah Muhammad, coming through me, warnings that I am not saying of anything that is not written in the Bible that we should expect in this time.

There are 400,000 Blacks in the armed forces because the White man does not have any jobs for us, so he uses you and sends you to Germany and wherever they have trouble in the world. Grenada—what business did you have in Grenada? What business do you have in Africa fighting for America? What business do you have fighting for this wicked nation? No Black woman should send her son to the United States Armed Forces. No Black woman should make her child a servant of the United States Army, even if they threaten her with jail.

American women; White women, Native American women, Asian women, stop and ask yourself what is the war all about? They will not tell you, even though they claim that they are making America and the world safe for Democracy. Some may say this position is anti-American, but what is totally anti-American is what the Government of the United States is doing to the American people, while the American people do not know anything about their wicked government.

America rejected Elijah Muhammad who was trying to show this country a mirror of her evil, and now the whole world is rising up saying the same thing to America. An edition of U.S. News and World Report had a picture with the article, “How the World Views America.” The picture depicts Uncle Sam as a Satan with red eyes and a tail on one side and a benevolent White man on the other, with the question: Which one is he? America is questioning why does the world view this country as a Satan or devil? What has America done?

All over the world, the rash of terrorism is springing up. In a 1980 report on the subject of terrorism, the CIA defined terrorism as “the threat or use of violence for political purposes by individuals or groups whether acting for, or in opposition to, established governmental authority. When such actions are intended to shock or intimidate a target group wider than the immediate victims.”

Let us judge America by its own definition. America’s policies in Africa, the Caribbean, Asia and Middle East are causing America to be hated by the peoples of the world. Is America hated because she is rich and powerful? Envy is a factor with the hatred from some of the European countries, but the poor nations are not envious of America. They understand why she is rich and why they are poor. Envy does not have anything to do with it.

What America thinks of the outside world or foreign policy is an extension of domestic policy; however America treats people within the country is the way she treats people abroad, because her foreign policy is an extension of her psyche, values and cultural upbringing. So, we can judge America’s actions toward Africa by America’s actions towards the sons and daughters of Africa.

What is America’s policy towards Black people in this country? Don’t give them a break. Cut back their jobs. Cut back their social programs. It can be said in one word: genocide. Kill the entire people. People are starving in Africa, but people are also starving in Mississippi, Alabama and even in Washington, D.C. They systematically killed all of the Black leaders that rose up.

So, if they kill our leaders because they do not want us in America to have a leader, and we do not own any gold, uranium, diamonds, silver, copper, bauxite, fruits or timber, what Black people have in this country are large numbers that could be troublesome if the right voice unites us. So whenever that voice appears, they crush it out. And if they crush out our leaders here, what is their policy in Africa? What is their policy in Central and South America?

From documents gathered through the Freedom of Information Act, Harper’s magazine published a list of covert actions initiated by the Government of the United States of America, through the CIA, without the knowledge of the American people, without debate in Congress and without any kind of appropriate response. These are foreign policies, not made even by presidents or senators. The real foreign policy, according to the scholars that have advised me, is made by multinational corporations of America. They determine foreign policy; and if they determine foreign policy, they also determine domestic policy.

In 1963, an attempt to assassinate Fidel Castro was unsuccessful. There are murderers in the White House. In the Dominican Republic, the U.S. organized a military coup to overthrow the government of Juan Bosch, which was successful. In 1963 in South Vietnam, the U.S. precipitated conditions leading to the assassination of Ngo Dinh Diem.

In Ecuador, they overthrew the government of Carlos Julio Arosemena. In Iraq, they provided financial and military assistance to Mustafa Barzani to establish independent Kurdistan. In Chile, they provided $20 million to Eduardo Frei Montalva to defeat Salvador Allende in the elections and they were successful. In Uruguay, Peru, Brazil and Dominican Republic, they trained the police and intelligence personnel in assassination and interrogation techniques to help defeat opposition. They were unsuccessful.

In the Congo in 1964, they provided financial and military assistance to defeat the rebel forces loyal to Patrice Lumumba and they assassinated him. The people elected Patrice Lumumba, so his assassination makes it evident that U.S. policies directed against a leader does not have anything to do with democracy. In South Vietnam in 1964, the U.S. attempted to eliminate the Viet Cong infrastructure through more than 20,000 assassinations in an operation called the Phoenix program, and it was partially successful. These are murderers and butchers in the name of government.

In Indonesia in 1965, the U.S. organized a propaganda campaign to overthrow the government of President Sukarno, who had organized the Bandung Conference that rejected all Europeans and united all the people of the planet. This campaign precipitated conditions that led to the massacre of more than half a million Indonesians. According to the Indonesians, they said it was nearly a million people that the CIA had killed in Indonesia.

In Jamaica, they organized a 1976 military coup to overthrow the government of Michael Manley. They supported three attempts to assassinate Prime Minister Manley, who was elected by the masses who loved him. But White America did not want him in leadership, so they tried to assassinate him three times and were unsuccessful. Later, they found another way to unseat him—through the International Monetary Fund.

In Grenada, they attempted to organize a coup to overthrow the government of Maurice Bishop in 1980. In Dominica, they provided financial support to Eugenia Charles in her bid to defeat Oliver Seraphine in elections. After the CIA brought her into power, it was then Eugenia Charles who stood by President Ronald Reagan and called for America’s intervention into Grenada. It is White people setting up Black people for the good of White people against Black people. How did the U.S. government ensure the re-election of Eugenia Charles? They gave her money to pave the roads in Grenada, and so the multinational corporations continued to suck the blood of the masses of the people.

In Iran, the U.S. overthrew the government of Mohammad Mossadegh and placed the Shah of Iran on the throne so that multinational corporations could get the oil out of Iran at a cheaper price.

Ralph McGehee, author of “Deadly Deceits: My 25 Years in the CIA,” was stationed in Japan, Taiwan, Thailand, the Philippines and Vietnam, working as a case officer on covert operations. Speaking with Senator Pat Moynihan, he said: “Mr. Chairman, I believe that CIA covert operations, whether paramilitary or not, have helped to destroy democracy around the world. By means of these operations, the CIA has replaced popular governments with brutal, murderous, U.S.-controlled military dictatorships that torture and kill their own citizens.

“So whether they involve paramilitary actions, political interventions, propaganda campaigns or other kinds of deceptions, covert operations are all designed to benefit U.S.-based multinational corporations that expropriate the national resources of so-called target countries. These operations hurt the Indigenous people and eventually Americans themselves.”

America’s foreign policy toward Central America, Africa, Asia, the Middle East and Latin America is a reflection of their own wickedness toward these peoples. America, like a giant serpent, has deceived the whole world.