Home National Stop digging your grave with your teeth! 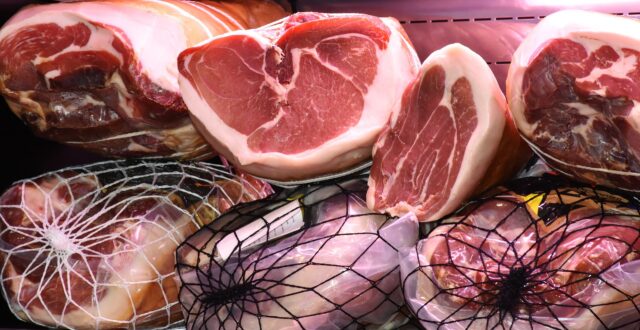 Two recent scientific studies linking the consumption of red meat to heart disease and drinking alcohol with cancer are one of several reports that tie the importance of what you choose to eat and drink with your health and quality of life.

“Meat consumption and risk of ischemic heart disease: A systematic review and meta-analysis” by Critical Reviews in Food Science and Nutrition and “Global burden of cancer in 2020 attributable to alcohol consumption: a population-based study,”

by The Lancet are just the latest scientific analysis that supports and vindicates what the Most Honorable Elijah Muhammad taught and shared through His revelatory and divine dietary law over 90 years ago. The Eternal Leader of the Nation of Islam’s teachings of “How To Eat To Live” are being proven in study after study that it is beneficial and leads to a longer, healthier life.

The Critical Reviews study reported that high consumption of red and processed meat has been proven to increase the risk by 9-18 percent of ischemic heart disease (IHD), heart problems caused by the narrowing of heart arteries. It is more commonly known as coronary heart disease.

The Lancet study reported that alcohol could increase the risk of cancer and decreasing consumption will decrease the risk. “Globally, an estimated 741,300, or 4.1 percent of all new cases of cancer in 2020 were attributable to alcohol consumption,” the report noted.  Cancers of the esophagus, liver and breast contributed to the most cases, according to the study.

Mr. Muhammad wrote two monumental books, “From God in Person Master Fard Muhammad How To Eat To Live,” Books I and II, where He lays out what foods are good to eat and which foods to stay from in order to live a more abundant life and avoid many illnesses of which Blacks are disproportionately impacted.  He instructed His followers to eat one meal a day, eat the best of foods particularly vegetables, to not eat pork and to stay away from too many sweets and sugary foods.

He warns against the consumption of meat, alcohol, highly processed and fried foods which have been proven to increase the risk for common ailments such as high-blood pressure, heart disease and some cancers. These ailments rank highest among Black communities, heart disease ranking as first according to a 2021 study by the American Cancer Society.

According to Critical Reviews, “High meat consumption has been hypothesized to increase the risk of IHD because of its high content of saturated fat and, for processed meat, of sodium; there is substantial evidence that high intakes of saturated fat raise low-density lipoprotein cholesterol (LDLc), and that high sodium consumption raises blood pressure, both well-established risk factors for IHD.” The study also states IHD is a major cause of morbidity and the single leading cause of mortality globally, responsible for over nine million deaths in 2016.

The Centers for Disease Control and Prevention (CDC) reported that stroke, type 2 diabetes and deficits in brain function are associated with poor nutrition and excessive alcohol consumption.

This is where the divine guidance and insight of Mr. Muhammad ring true.

“TO EAT MEAT is against our life and shortens the span of our life. We eat meat because it is a habit from childhood. But if we eat meat only once a day or every other day or twice a week, it will not be so hard on our digestion,” He wrote in  “How to Eat to Live” Book II. He also warned against the consumption of alcohol.

“The government permits the deliberate making of alcoholic drinks which it knows are not good for a person who has no limitation on how much of it he drinks,” Mr. Muhammad warns in Book II published in 1972.

“On Page 26, in the chapter ‘How Allah’s Way Prolongs Life, (Book 1)’ He writes: ‘Many are advertising what to eat, and what medicines to take to make you eat or stop you from eating. Many books are written and sold on good and bad foods, as well as on reducing the weight and on how to increase the weight, introducing the many chemicals used to bring about the desired result. But Allah, in the Person of Master Fard Muhammad, to Whom praises are due forever, has given us a better and safer way to do these things,’” said Min. Farrakhan in Part 37 of his 2013 lecture series, “The Time and What Must Be Done.”

Dr. Jessica Muhammad, a Chicago-based neurologist, explained to The Final Call that diet plays a critical role in achieving and maintaining health.  “From the ketogenic diet for epilepsy to the fruit-and-veggie-rich, fatty-meat-low DASH diet for hypertension, western medicine is bearing witness to the importance of food choices in health.

There are lots of dietary fads that come and go in the media, but the essential dietary principles for a long, healthy life can be found in the Teachings of the Most Honorable Elijah Muhammad,” said Dr. Muhammad.

Decades before terms like “intermittent fasting” and the OMAD (one meal a day) diet became popular, Mr. Muhammad taught His followers to eat one meal a day or every 24 hours for life more abundantly. Today other eating and dietary regimens like the “Mediterranean diet,” and “warrior diet” have joined the list of programs for eating healthier foods, avoiding meat and alcohol, and eating less frequently throughout the day. Mr. Muhammad is owed a debt of gratitude and thanks for laying the base that others are benefitting from, studying and sharing with the world.

“ALLAH TAUGHT ME that one meal a day would keep us here for a long time; we would live over 100 years. And eating one meal every two days would lengthen our lives just that much longer,” Mr. Muhammad wrote in Book II. “He told me you would never be sick, eating one meal every three days. The fact that fasting is the cure to 90 percent of our ills is known by the medicine scientists. But, they do not teach you that,” He added.

Johns Hopkins neuroscientist Mark Mattson, Ph.D. studied “intermittent fasting” for 25 years and has published many studies about its benefits. “Intermittent fasting contrasts with the normal eating pattern for most Americans, who eat throughout their waking hours. If someone is eating three meals a day, plus snacks, and they’re not exercising, then every time they eat, they’re running on those calories and not burning their fat stores,” he wrote.

Motivational speaker and social media influencer Tequella Muhammad told The Final Call, “We are in that time, we’re knocking the falsehood out with truth. I think a lot of stigma with fasting comes from people who think you’re going to die, and you’re going to be sick. One thing I know is that I truly trust and believe in the Honorable Elijah Muhammad’s words.

Tequella Muhammad has been successful in maintaining “How To Eat To Live” and encouraging others on social media to do the same.

Dozens of social media challenges are full of testimonials from those touting the benefits of eating one meal a day, fasting and eating healthier foods.

Rosemary Seddon wrote on Facebook, “Have been doing intermittent fasting for the past 2 yrs. One meal a day with lots of water. Eat every 24 hrs. Sometimes I do dry-fast, nothing to drink at all. Drastic change lost 40lbs … no more inflammation of the joints. Was pre diabetic. Sugar level is back to normal, no trace of diabetes. …”

The Hon. Elijah Muhammad also encouraged consumption of navy beans, writing in Book II,  “SIMPLE navy beans is one of the best foods that we can eat.”

Once again, modern science bears witness to what Mr. Muhammad revealed decades ago. “Navy beans may seem ordinary or unimpressive, but they hold a number of health benefits for us, possibly including their potential ability to boost cognition and memory, protect the heart, optimize digestion, promote healthy circulation, reduce the risk of cancer, stimulate growth, and lower diabetes risk,” wrote John Staughton in an article, “7 Wonderful Benefits of Navy Beans,” published on organicfacts.net.

Student Minister Ava Muhammad, national spokesperson for Min. Farrakhan, said by adhering to what Mr. Muhammad prescribed would enable us to defend ourselves against Covid-19.

“Long before it became a leading cause of death in the world, the Honorable Elijah Muhammad, in his monumental two-volume book, ‘How To Eat To Live,’ repeatedly warned us about diabetes and provided divine guidance on how to prevent it and how to eliminate it through diet,” she said.

“If we follow the guidance in this two-volume book, given by Allah (God) to the Honorable Elijah Muhammad for us, it will minimize and even prevent the uncontrolled inflammation that helps Covid-19 kill us,” said Student Min. Ava Muhammad. (Final Call staff contributed to this report.)

ABOUT US
From humble beginnings in the basement of the Honorable Minister Louis Farrakhan’s south Chicago home in 1979, Final Call newspaper has emerged as an uncompromising alternative to the mainstream corporate owned media machine.