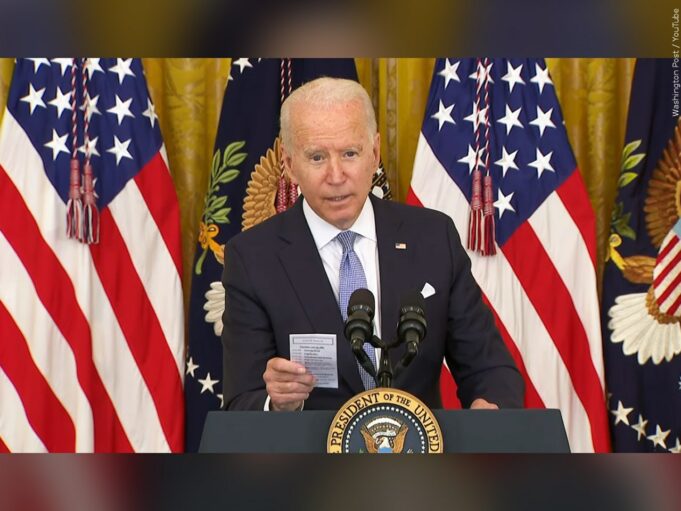 The American people are divided over Covid-19 vaccine mandates, the majority of which have been issued because of the delta variant sweeping across the country.

The division comes at the heels of President Joe Biden’s July 29 announcement that federal workers and on-site contractors either take the Covid-19 vaccine or be subjected to regular coronavirus testing. The federal government said it would cover the costs for testing. On Aug. 9 it was reported the Pentagon will require members of the U.S. military to get the Covid-19 vaccine by Sept. 15, according to a memo obtained by The Associated Press, the news agency reported.

“I will seek the president’s approval to make the vaccines mandatory no later than mid-September, or immediately upon” licensure by the Food and Drug Administration “whichever comes first,” Defense Secretary Lloyd Austin said in the memo to troops, warning them to prepare for the requirement, reported AP.

Several corporations and institutions have released their own Covid-19 vaccine demands. United Airlines is one of the latest on the growing list of companies requiring employees to get vaccinated and is the first major U.S. airline to implement the mandate.

State and local governments are either issuing similar policies or banning the mandates altogether. New York City Mayor Bill de Blasio announced on Aug. 3 that workers and customers for indoor dining, indoor fitness facilities and indoor entertainment facilities will be required to show proof of vaccination.

Opposition and fighting the status quo

“There’s millions of Americans who are rejecting this vaccine. The media creates this false narrative that the majority, that everybody is lockstep with this vaccine efficacy, that the whole country is lockstep in terms of the efficacy and approval of this vaccine, but that’s not the case. There’s millions of Americans. There’s thousands upon thousands of medical workers who totally reject this vaccine,” said Nation of Islam Student Minister Dr. Wesley Muhammad, an author and researcher, to The Final Call.

“So, the media does not present a full narrative. The push back that is being reported in countries around the world, that’s here too. It’s just that the American media is much more corporately and politically controlled than other media around the world.”

Groups of federal workers are amongst those opposing the mandates. The Federal Law Enforcement Officers Association, which represents over 30,000 federal officers and agents, released a statement saying, “…forcing people to undertake a medical procedure is not the American way and is a clear civil rights violation no matter how proponents may seek to justify it.”

“We oppose all medical mandates. We think that medical decisions should be made by individuals with their individual healthcare providers. We think that every human is different, and that one-size-fits-all mandates are never appropriate, and that people should have prior free and informed consent,” said Mary Holland, the organization’s president, to The Final Call.

“That’s our basic position, and it’s especially so for interventions like these Covid shots, which we believe have been inadequately tested.”

Along with the vaccine mandates, the Biden administration is also attempting to increase Covid-19 vaccinations among children 12 and older. Ms. Holland said there’s no science that suggests children should be vaccinated. While children can get sick from the virus, most have mild symptoms or no symptoms at all, and fewer have been sick with Covid-19 compared to adults, according to the CDC.

“We don’t think there’s any legal justification to require children to get vaccinated. We are fighting vaccine mandates for children,” Ms. Holland said.

She advised families who do not want their children vaccinated to write their school boards, school principals and to the deans of colleges and object to such mandates.

“That gives parents some leverage to say we don’t want these restrictions, and we won’t keep our kids in the school if you keep these restrictions in place. We will opt for homeschooling or to go to a different school district or to a private or parochial school that doesn’t have these measures,” continued Ms. Holland.

Several people are fighting back through lawsuits. In June, over 150 employees at a Houston, Texas hospital were fired or resigned after a federal judge shot down a lawsuit over the vaccine requirement. It has been appealed to the 5th U.S. Circuit Court of Appeals. In another case, eight Indiana University students sued the school over the vaccine mandate. An appeals court upheld the mandate, and an attorney for the students said he would be filing an appeal to the Supreme Court.

Ms. Holland said people who do not want the Covid-19 vaccine are going to have to apply for religious exemption or may even have to leave their jobs to get around the mandates.

“We at Children’s Health Defense are doing everything we can to make sure that any use of these products is voluntary, but we actually believe that these products really shouldn’t be on the market at this point,” she said. “They are excessively dangerous. The Food and Drug Administration has not followed its own requirements to ensure that these products are safe for the public.”

“I don’t know what’s going to happen when White folks start taking these vaccine mandates to court. I don’t know. I have no expectations. I place no hope in the legal system. At the end of the day, Black people, in order to protect our bodily integrity and refuse to take this experimental military technology, or refuse to submit to this experimental military technology, in order to free ourselves from that mandate, we are going to have to separate,” he explained.

The way out: Obey Divine Guidance

The Honorable Elijah Muhammad, patriarch of the Nation of Islam, taught on separation and that America is being hit with calamities because of her mistreatment of Black people.

“In the English language, according to Webster’s Dictionary, the word calamity means, ‘a state of deep distress or misery caused by major misfortune or loss, or a great event marked by great loss and lasting distress and affliction.’ Such calamity is now prevailing in America. It is getting worse daily,” he writes in his book “The Fall of America.”

He continues: “The third verse of this Chapter (Holy Qur’an 101:3) asks a question: ‘And what will make thee know how terrible is the calamity?’ The answer is given in verse four: ‘The day wherein men will be as scattered moths.’ We do not have to ask anyone whether or not this warning of the Holy Qur’an is now being fulfilled. We see the fulfillment of this prophecy with our eyes and hear with our ears, these great calamities that are now striking America. We see the great division, the great disagreement, disunity and murder of men.”

During his July 4, 2020 message, “The Criterion,” the Honorable Minister Louis Farrakhan warned America, and he cautioned against forced vaccinations.

“If you bring the vaccine and say you’re going to bring your army to force us to take it, once you try to force us, that’s a declaration of war on all of us. You only have this one life. Fight like hell to keep it, and fight like hell to destroy those whose heart and mind is to destroy you and take your life from you,” he warned.

The Minister also gave the cause and solution to the Covid-19 pandemic, which he called a “pestilence from heaven.”

“Our iniquitous behavior is a pestilence on the earth so God answers with a pestilence. His anger is at a point where He has to punish the inhabitants of the earth for their iniquity. How big is the earth? The Honorable Elijah Muhammad taught us the earth is 196,940,000 square miles and 57,255,000 square miles of it is land. You may live in the sea, on the sea, but you don’t live and inhabit under the sea. So, punishment from God’s pestilence is to turn against you the things that you depend upon for your sustenance,” Minister Farrakhan said.

He told America, China and the governments of the earth that the only solution to the virus is to repent to God and ask for forgiveness.

“This pestilence is going to get worse. But you, America, China, if you don’t want to get caught up in the next phase of the blowing of the trumpet, then what you should do is call your people together and come out to them and ask them to go in their chambers of quiet and ask forgiveness for your sins, for your sins have reached unto heaven,” he said.

He expressed that the priests, ministers, presidents, kings and rulers need to confess their sins to God.

“God sent Moses to Pharaoh with an opportunity for Pharaoh to save his life and save his country. Pharaoh thought about it for a second and then his heart was hardened. And ultimately, Allah God had to sink Pharaoh in the Red Sea. That is where we are at right now,” Dr. Wesley Muhammad said.

“Allah through Moses, the Most Honorable Elijah Muhammad and the Honorable Minister Farrakhan, has offered Pharaoh an opportunity to save himself. Come out in sackcloth and ashes. Humble yourself. Turn to heaven, and heaven can heal the land,” he continued.

“Pharoah heard Moses on July 4. He absolutely did. And I suspect, Trump thought about it for a second. As the scripture says, Pharaoh would contemplate, but then his heart is hardened,” explained Dr. Wesley Muhammad.

“Both Trump’s and Biden’s; same, same. And so no, Pharaoh will not heed the command of Allah because Pharaoh is incapable of humbling himself before Allah. This country is on the road to hell in a roller coaster.”

Ms. Holland believes that to stop the Covid-19 vaccine mandates, half the population of the world will have to say no.

“We’re not going to send our kids to school under these terms, or no, we’re going to form new businesses. We’re not going to come to your institutions. This is unacceptable. Where this goes … is boosters every six months, testing every week, tracing if you have a sniffle, no travel unless you’re vaccinated. This goes to a very bad place,” she said.

Dr. Wesley Muhammad said, Black people will have to stand on belief and obey the Messenger of God, the Honorable Minister Louis Farrakhan.

“Don’t take the vaccine. That’s first and foremost. But Allah revealed through the Honorable Minister Louis Farrakhan that there are treatments. We are not saying that we should be sitting ducks for this virus. No, there are treatments, and through The Final Call, guidance is given to the Black Nation, ways to protect ourselves and get through this dark hour,” he said. “But first and foremost, we have to be plugged in to the source of divine guidance, and we have to obey.”