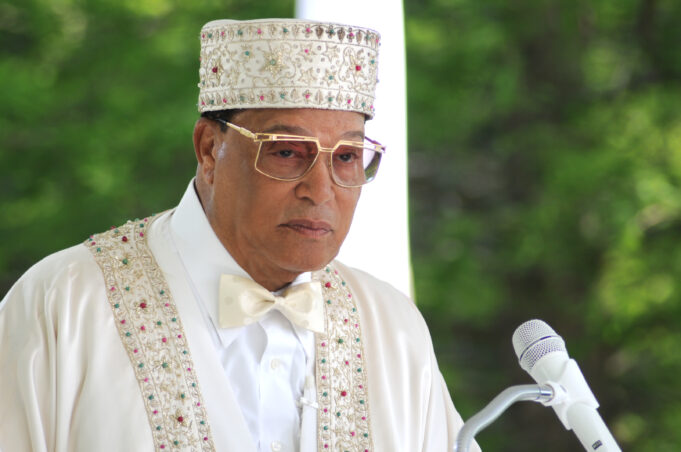 WITH ALLAH’S (GOD’S) HELP, WE CAN REMOVE THE ‘PRE-CONDITIONS’ THAT DRIVE THE DEATHS FROM COVID-19

“America, you won’t solve it! The scientists of the world, you won’t solve it! I want to tell you what will solve it. This virus is a pestilence from heaven, so scholarship from hell can’t deal with a pestilence from heaven; but if you want to stop it, you’ll have to go to heaven…there has to be a natural connection between heaven and earth. And once that connection is broken, heaven does not suffer, it is the earth that suffers.” –The Honorable Minister Louis Farrakhan, “The Criterion”

Look carefully at the words in the above excerpt. The Minister told America she “won’t” solve it, he did not say she “can’t” solve it, nor did he say there is no solution for it. He said, “if you want to stop it, you’ll have to go to heaven.” America is not only unwilling to do that, she is so steeped in evil that by now she is most likely unable to do that. If we rely on America’s “scholarship from hell” we won’t solve it either.

In biology, “immunity” is the body’s ability to protect itself from the invasion of pathogens (infectious diseases). The Honorable Minister Louis Farrakhan writes, in Self-Improvement: The Basis for Community Development [Study Guide 18],

“Every biological act of the physical body is directed to one predominant goal: to stay alive. To do this, every organism must preserve itself in the face of external forces which threaten its existence; and when it ceases to work energetically on its own behalf, something finally will destroy it.”

In the fight against Covid-19, the natural law Minister Farrakhan sets forth above must govern our approach: we each have the capability and the responsibility to work on our own behalf. The one thing universally agreed upon by both sides of the debate over this virus is this: underlying chronic conditions such as obesity, heart disease, high blood pressure, certain prescription drugs, etc., not only contribute to Covid-19 severe illnesses and fatalities, they are the primary drivers. For this reason, they are called co-morbidities or pre-conditions.

The U.S. Government deceptively puts all the emphasis on the infection rate and offers no guidance or help to its citizens in addressing pre-conditions, beyond saying they exist. We are made to live in fear of “catching Covid.” This blinds us to the critical importance of strengthening our natural defense mechanism, which will determine whether or not the virus can afflict us to the degree that it causes serious illness or death. The so-called vaccines being pushed down the throats of the American people are not only deadly, they don’t work. Hundreds of thousands of “fully vaccinated” people are contracting the virus, getting sick and dying (see VAERS chart on next page). Who says they don’t work? The U.S. Government now says their “vaccines” are ineffective, especially for us (Black people).

“The U.S. Centers for Disease Control and Prevention on Friday warned people who are immunocompromised that the Covid-19 vaccine may not have been effective for them and encouraged them to take precautions as if they were not vaccinated.” WHAT?!!

“People who are immunocompromised should be counseled about the potential for reduced immune responses to Covid-19 vaccines and to follow current prevention measures (including wearing a mask, staying six feet apart from others they don’t live with, and avoiding crowds and poorly ventilated indoor spaces) to protect themselves against Covid-19 until advised otherwise by their healthcare provider.” The CDC did not go so far as to tell the millions of immunocompromised people in the U.S. to get an additional shot, noting that ‘the safety, efficacy and benefit of additional doses for Covid-19 vaccines in immunocompromised persons continues to be evaluated’…..”

What we have, in that announcement, is the profile of a pathological liar.

Let’s begin with this six-syllable word, “immunocompromised.” This is a word that has not been in the media until now. What does it mean? It just means a weak immune system. It means people with pre-conditions. So why not just say that?

Why use a long word that is unfamiliar to the general public? It is so we won’t realize that they are referring to the same people who were told by the government, “You people need the vaccine more than anyone.” To this day, Black celebrities, artists, politicians, preachers, educators are saying to us, “Get your shot.” In the wake of this announcement, do they have the reasoning power to look again at Minister Farrakhan’s words to Black people in The Criterion: “ Remember the vaccine they gave us for polio, that was cancer itself? So how in the hell can you trust them with a vaccine when you know what they have done?”

What we need to realize is the fact that if the immune system is functioning properly, it will prevent or defeat this pathogen. Those countries which have kept the virus in check are the ones who address the pre-conditions.

Age is a major factor in hospitalization and death from Covid-19. According to the Centers for Disease Control (CDC), 80 percent of hospitalizations and deaths are among those 65 and over. It is not the number of years on Earth killing the person, it’s the number of years eating fake food, breathing poisoned air, drinking poisoned water, taking prescription medications, being vaccinated (to name a few). This is the environment the giant multi-national corporations have created to produce an endless epidemic of chronic ill health. Over the past century, we have come to accept being chronically ill. This is in direct opposition to the Will of Allah (God) Who created the magnificent human body to function at an optimal level up to 1,000 years on this planet.

Diabetes is a huge driver of death among Covid-19 patients. Again, from the CDC, a government study in 2020 showed that nearly 40 percent of the deaths were patients who suffered from diabetes. Like all of the pre-conditions, this disease is and has been, long before THE COVID-19 pandemic, dominant in the Black community. Diabetics are, in the new language being used by the CDC, “immunocompromised.” They have weakened immune systems.

“America’s mortality rates from diabetes have been climbing since 2009. Diabetes was already a slow-moving pandemic. Now COVID-19 has crashed through like a fast-moving wave.”

—Albert Huang, Professor of Medicine and Director of University of Chicago Center for Chronic Disease.

The World Health Organization (WHO) projects that diabetes, a global epidemic (pandemic) affecting 382-422 million people worldwide (over eight percent of the world’s entire population), will be the 7th leading cause of death in the world by 2030. An estimated four million people die annually from diabetes complications.

The primary cause of diabetes is diet. It is what some medical professionals call a “food-borne” disease. It damages the heart, blood vessels, eyes, and nerves and is a leading cause of kidney failure. The first thing most sufferers are told after a diagnosis is to achieve and maintain a healthy body weight and avoid sugar, saturated fats and tobacco.

Researchers have learned that Covid-19 thrives in a high-sugar environment.

Long before it became a leading cause of death in the world, the Honorable Elijah Muhammad, in his monumental two-volume book, “How To Eat To Live,” repeatedly warned us about diabetes and provided divine guidance on how to prevent it and how to eliminate it through diet.

If we follow the guidance in this two-volume book, given by Allah (God) to the Honorable Elijah Muhammad for us, it will minimize and even prevent the uncontrolled inflammation that helps Covid-19 kill us.

Inflammation is primarily responsible for nearly every disease there is. These deadly so-called vaccines being administered for the virus are actually genetic manipulation that stimulate inflammatory responses and disabling the immune system Allah (God) gave us to defend ourselves.

Study any of the “pre-conditions” that may affect you or your loved ones and go to work to do that which will dramatically reduce or even eliminate them, beginning with the powerful system of protection set forth in “How To Eat To Live.”

Health care is not drugs, which nearly always have side effects and only reduce symptoms. They don’t address the underlying root cause of our health problems. A government that cared about us would give us guidance and strategies to achieve and maintain a robust immune function so we can not only effectively combat Covid-19, but live the long, healthy life Allah (God) intended for us to live.