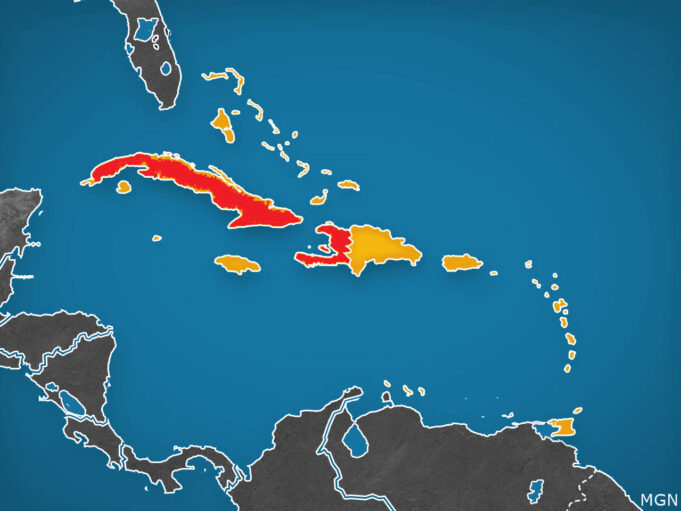 Coming across television, radio, smart phones and podcasts are news and photos of unrest, suffering in Haiti and Cuba as the United States lies and omits the truth of her intervention in these nations. America’s hands are bloody as she pushes deprivation and death in these Caribbean countries.

The United States sees itself as the master of the Western Hemisphere. She has destroyed true movements for liberation and progress wherever they have arisen in this part of the world.

Her incursions have never been driven by respect for human rights, democracy, freedom or peacemaking.

In Haiti, the United States blockaded the Black Republic at its birth, occupied the country for 19 years, set up the current political and economic structures, installed and removed leaders and hints of a role in the assassination of Haitian President Jovenel Moïse in early July continue to emerge.

Haiti’s acting prime minister Claude Joseph, who is stepping down and allowing Ariel Henry to take the office according to media reports, called for American troops in the country as an urgent crisis grows more dire.

But as the crisis unfolds, questions about a hidden U.S. hand keep surfacing. So far accounts haven’t yielded fire, but there is plenty of smoke suggesting the old enemy, Uncle Sam, is still at work in Hatii.

Whether it is “respected“ news outlets like CNN, the New York Times, the Washington Post or true friends and lovers of Haiti, these disclosures cannot be ignored. Columbian officials say alleged Colombian mercenaries’ charged with killing President Moise initially were to arrest him and “put him on display for the DEA.”

The night of Mr. Moises’ killing, video captured an English voice saying it was a DEA raid and calling for anyone at the president’s Port-Au-Prince home to stand down. Thirty-nine people have reportedly been implicated in the murder plot, including 23 ex-Colombian military men and two Haitian-Americans.

The news outlets say several of the accused killers have served as U.S. law enforcement informants and some of the Colombians were trained by the U.S. military. A Haitian businessman accused in the plot reportedly put together advisors and told those he recruited the U.S. Justice and State departments approached him and wanted to install him as president.

The man, Christian Emmanuel Sanon, was arrested in Haiti “in a raid on a house where, according to a source close to the investigation who is not authorized to discuss the incident, police recovered boxes of ammunition, 24 unused shooting targets and a cap labeled DEA. “Sanon has told police he had no knowledge of the attack,” CNN reported.

The United States can only be counted on to continue exploiting Haiti through meddling, using corrupt political figures, oligarchs, non-profits and corporations to help her.

Jemima Pierre, the Haitian/American coordinator for the Black Alliance for Peace, noted, “Nothing happens in Haiti without the knowledge, funding, and media coverage of the U.S.,” she said. “We don’t want the further intervention of the U.S. in Haiti, especially when the U.S. has its hands full. It can’t even control its own democracy, I mean, look at Jan. 6. The nerve to say that you’re going to bring democracy when you can’t control your own.”

With protests in Cuba, Americans again are singing “let freedom ring” and blaming the socialist government for Cuban suffering. But the suffering of Cubans comes as the U.S. engages in a kind of starvation politics that has led to shortages of flour, bread, sugar and basic foodstuffs. The U.S. embargo is so bad, Cuba doesn’t have syringes to innoculate her own people with a Covid-19 vaccine she created.

Meanwhile Florida Sen. Marco Rubio and Republicans want to “cry freedom” in Cuba while they conspire to deprive Black people in America of voting rights and any needed assistance in a still raging pandemic.

The U.S. has tried for over 60 years to destroy the Cuban revolution through invasion, death plots, covert operations and proxies.

But Cuban suffering does not matter. The important thing is Florida’s electoral college vote and its value to whoever wants to be president. A powerful anti-Cuban government voting bloc and fundraisers make Florida a political prize for presidential elections in 2024.

Obama administration policies easing some sanctions against Cuba were undone by the Trump administration. Activists say Mr. Trump enacted 243 new anti-Cuba sanctions and put Cuba on the U.S. terror list. In 2019, Mr. Trump imposed an oil blockade, ended and stopped Cubans in America from sending money to relatives back home, restricted flights to Cuba, bullied banks, Western Union and other financial institutions into limiting transactions with Cuba, blocked the Cuban government from getting needed commodities for its people and threatened those who may have wanted to do business with Cuba, they note.

Is Cuba perfect? No. No government on the planet is perfect, but to deprive, deny and destroy people for political purposes is abominable and that is what the U.S. continues to do. While she has found a way to coexist with leading socialist nations Russia and China, America works to beat Cuba into submission, no matter the cost.

If America’s political system is better, why doesn’t she let Cuba’s political experiment succeed or fail on its own? Why the need to plot, kill and destroy people in a system America declares is bound to fail? And despite America’s charges, loyal Cubans have turned out in streets to support their government.

But this is the day of America’s downfall and woe to this nation when God Himself feeds her the same desolation she has force fed others. “The day of the LORD is near for all nations. As you have done, it will be done to you; your deeds will return upon your own head,” warns Obadiah, Chapter 1, Verse 15 in the New International Version of the Bible. We have arrived at that time.