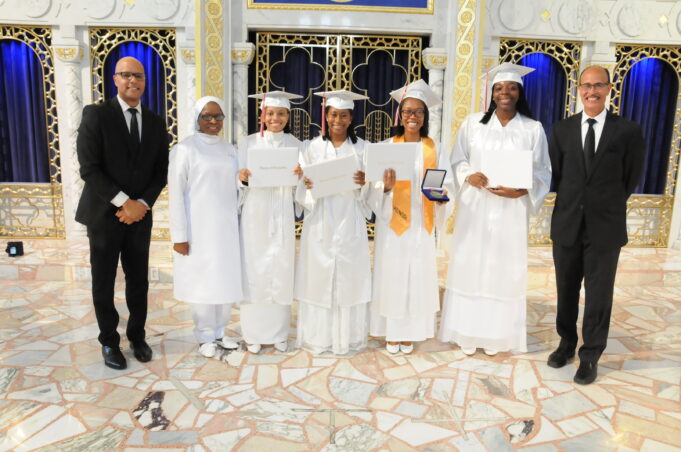 CHICAGO—In the institution created on the foundational wisdom of Master Fard Muhammad and established by the Honorable Elijah Muhammad as a “workshop for potential gods,” 11 graduates accepted their diplomas during a July 8 ceremony as excited friends and relatives looked on.

The 2021 Muhammad University of Islam (MUI) graduation was a welcomed change from the previous year when the ceremony was held virtually due to the Covid-19 pandemic, even as attendees were seated socially distanced and wearing masks.

The event opened with prayer and a procession of graduates. Interim Director Talib ul Hikmah Karriem welcomed the audience, saying, the Mahdi, Master Fard Muhammad, established “a new educational paradigm” in the establishment of MUI “that will grow each of us into reflections of God Himself.”

He acknowledged the tireless work of the Honorable Minister Louis Farrakhan, who re-established the institution after it was dismantled in the 1970s.

“We wouldn’t have an independent school system … an education free from the crippling poisoning of White supremacy if it were not for the perfect love” of Minister Farrakhan, he said.

Keynote speaker Student Minister Ishmael Muhammad told graduates there are two types of education. One teaches the masses to serve and the other teaches the elite class to create jobs for themselves. He implored the audience to get an education that benefits self and the Black community “and not be dependent on our enemies.”

“Ignorance is the number one enemy of the rise of our people. You received at Muhammad University of Islam a God-centered education,” he said.

Min. Ishmael Muhammad said the knowledge that guides the current civilization would reach a point where it would no longer be effective in solving problems and the people would become dissatisfied. Dissatisfaction would call into existence a change factor, he said.

We are witnessing the unraveling of America and the end of White supremacy, he said.

Min. Farrakhan has said the diameter of your knowledge prescribes the circumference of your activity, he continued.

“You are born to succeed. Never say I can’t do it, … that’s not the words or expression of a god. You have been given Christ software. You have been given the right operating system and your hard drive hasn’t been corrupted yet,” he said, warning that the aim of Satan is to turn people from God.

Delivering a welcome from the Class of 2021, Sister Jayda X said the aim of MUI is to produce future rulers and leaders of a new world of peace. The Honorable Elijah Muhammad wanted a school where Black children are taught by Black teachers to “learn about our Black selves,” she said.

Valedictorian Rashad Muhammad, who graduated a year early, never attended public school and was grateful to attend MUI where “teachers and staff actually care about my progress and growth as a young Black man.”

“Never doubt your abilities,” he told graduates. “Always trust that you have the abilities to excel in difficult situations.”

Thanking her parents Darrin and Robyn Muhammad, co-valedictorian Taliah Muhammad was brought to tears as she recounted how her mom helped her through the struggles of school and life.

“The only reason my family moved to Chicago is so we can attend the University of Islam. That is how valuable education is to my parents and many others,” she said.

Offering reflections, salutatorian Qaadir Muhammad, a fourth generation Muslim under the teachings of the Most Honorable Elijah Muhammad, said: “What makes MUI so valuable is we can actually relate to what’s being taught. I’m grateful to be in a school where our history isn’t being white-washed as in other schools.”

Sister Lisa R. Muhammad gave special recognitions to staff and announced that the graduating class as a collective amassed $500,000 in scholarship offers.