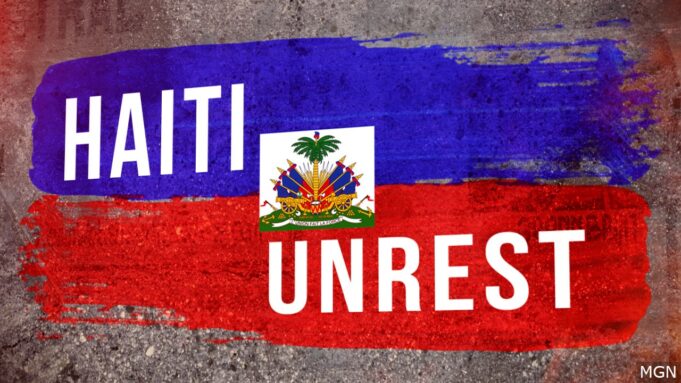 With the news of the killing of Haiti’s president, and later announcements accused mercenaries who murdered President Jovenel Moïse and seriously wounded his wife were in custody, came expressions of support and grief for Haiti and a fierce declaration: No more outside meddling in the world’s first Black Republic.

News of possible U.S. involvement came July 12 with the arrest of a Haitian businessman from Florida, allegedly in connection with the murder. Haitian authorities announced the arrest of Christian Emmanuel Sanon, 62, who previously expressed a desire to lead Haiti, and was referred to a as Christian pastor.

According to the Associated Press, a close friend said Mr. Sanon, who had hired Colombians as security for a trip back to Haiti, may have been duped into joining the plot. Colombian ex-soldiers have been arrested and charged with killing President Moïse in his home July 7.

“The associate, who spoke on condition of anonymity out of safety concerns, said Sanon told him he was approached by people claiming to represent the U.S. State and Justice departments who wanted to install him as president,” reported the Associated Press. “He said the plan was for Moïse to be arrested, not killed, and Sanon would not have participated if he knew Moïse would be assassinated.”

Security forces said ex-military Columbian nationals and two Haitian-Americans were arrested in Port-Au-Prince for the brazen July 7 attack and the hunt for additional suspects was still on.

Haitian rapper Wyclef Jean tweeted, “Saddened by the dramatic daily events in Haiti. The assassination of @Moïsejovenel is an attack on the institution of the presidency & is a tragedy! My prayers r with his family & 4 my Haitian brothers & sisters who are the daily victims of this chaotic situation.”

Patrick Gaspard, a community activist whose parents are Haitian, tweeted, “As an open society activist, I believe fiercely in the power of elections. Now is NOT the time to be putting a premium on forced elections in Haiti. That is a misguided and dangerous approach to the moment. Let’s please talk with Haitian civil society and listen to what they need.”

Several other people and organizations called out White supremacy and mainstream media coverage of the assassination.

“Haiti is only being punished because they were the first Black nation to rebel against European colonizers. Now, the West has made Haiti a permanent example of the price for challenging White supremacy,” the Movement for Popular Education tweeted.

“The media coverage of Haiti is overflowing with thinly-veiled racism. Crime, corruption, incompetence … No mention of the fact that independent Haiti from day one has faced crippling, unpayable debt to its French erstwhile enslavers, along w unremitting US imperialist domination,” tweeted Carlos Martinez under the handle @agent_of_change.

Dr. Cécile Accilien, scholar of African and African-American studies and a board member of the Haitian Studies Association, told the Black News Channel (BNC) that in order to understand what is going on right now, Haiti has to be looked at from the perspective of the first Black country to gain its independence from the French.

“The U.S., for instance, did not recognize Haiti’s independence for over 50 years. Haiti had to pay reparation to France, its former colony. You have to understand all the actors behind the scenes, inside and outside of Haiti,” she said.

Dr. Greg Carr, chair of the Africana Studies Department at Howard University, explained to The Final Call some of Haiti’s history that has led up to the current moment. He named Toussaint L’Ouverture, who was instrumental in the Haitian Revolution, as the first leader to be assassinated with Western interference. Then, a few years after Jean-Jacques Dessalines led Haiti to independence and became the country’s first ruler, he was assassinated in the street by his own soldiers.

“I think the thing that links those two deaths, Toussaint captured, kidnapped and death and then Dessalines’ assassination, the thing that links them is Haiti is the country in this hemisphere that punched back, and ever since then, White countries and White countries where Black people live like the United States have almost sworn a blood oath to never let them know rest, never let them be fully successful, and to always interfere,”

Dr. Carr said. “And I think this Moïse assassination just continues the attempt to kill Haiti from outside, whether by propping up proxy politicians or direct invasion. And that we must always remember that Haiti continues to be tortured and punished for the same reasons that Black people are attacked everywhere in these societies, including the United States. These people are never gonna leave us alone, so we need to learn the lesson that we need to fight back.”

He said his first reaction upon hearing the news was that the U.S. must have withdrawn support from President Moïse.

“They say that the assassins were heard speaking English, claiming to be DEA agents, and then were heard speaking Spanish. And that’s absolutely consistent with U.S. government policy in Haiti, is to prop up the dictators, to protect them, whether through private means, security or shadow-funded government protection, and then to try to stoke and foment rumors that it could have been people from the Dominican Republic,” he said.

He explained that the last time a Haitian president was assassinated outright was in 1915 when Vilbrun Guillaume Sam was killed. Afterward, the U.S. occupied Haiti until 1934.

“The last two presidents, one, a damn entertainer, Sweet Michel Martelly, followed by a man who has never held political office but was a businessman known as the banana man, the guy who just got killed. These are clearly proxies for Western interests, American interests, corporate interests, and when they outlive their usefulness, I think these countries and the businesses that prop them up they decide on a different course of action,”

Dr. Carr said. “And right now, because there are very few elected officials, the chief justice Supreme Court died of covid, the prime minister had been relieved of duties. I think that what happens next could very well be that the United States, either through the United Nations or directly, or with France or somebody else, will move to occupy Haiti.

Political and cultural analyst Dr. Cleo Manago told BNC, “Nothing is going to change in terms of American foreign policy regarding Haiti because there’s really been no involvement except to make sure that whoever’s in power can be controlled by the United States. So now that they have this person killed, they’re going to look for another person.”

Political analyst Melik Abdul followed behind him, saying, “I don’t think that this is going to affect much when it comes to U.S. foreign policy or even having our allies around the world revisit their positions on places like Haiti. If we think about what happened even in places like Africa, there’s a long history of, what we’ll say, colonizers coming into these places, infiltrating these places, occupying these spaces, and lifting up regimes. So this isn’t really a surprise to me. It’s a very unfortunate thing for the people of Haiti.”

BNC’s Nayyera Haq explained that there are a lot of concerns about potential refugees, chaos and people either locking down at home or seeking to leave the country.

“I think the first thing is the concern, just the human concern. People are worried about their relatives and friends and family members in Haiti. They can’t get in contact with them. A lot of people have fled. They fled their homes. They are in the countryside or not coming out,” Dr. Carr said.

He said Black people in the United States should be concerned and should be protesting, demonstrating and pressuring the Congressional Black Caucus.

“I think we need to be organizing and speaking with one voice, because it just feels like and looks like, possibly, there’s going to be a foreign invasion of Haiti and an occupation by these Western powers either directly or through their proxy in the United Nations,” he said.