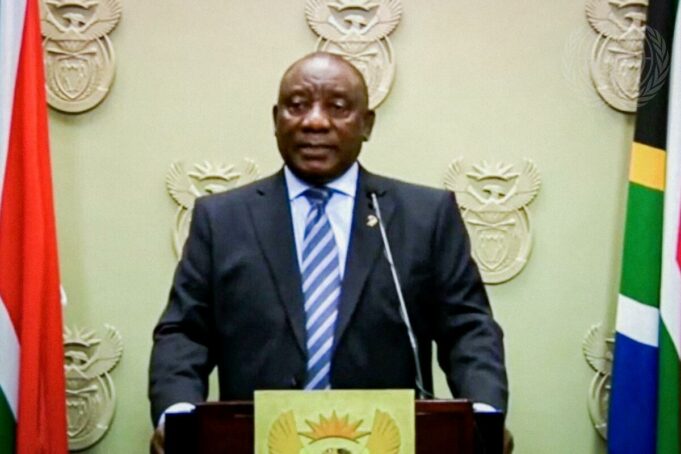 In South Africa’s President Cyril Ramaphosa’s recent weekly column, the former anti-apartheid activist expressed his angst at the “total disregard for successive United Nations Security Council resolutions that call for an end to the occupation (by Israel) of Palestinian land and the denial of the Palestinian people’s right to self-determination.”

The South African president added, that without a willingness to address the “root causes” of the conflict, “in this case the illegal occupation by Israel of Palestinian land … there will never be peace.”

Taking issue with his public support for Palestinian self-determination, and not making any headway during his private sessions with Mr. Ramaphosa, South Africa’s Chief Jewish Rabbi Warren Goldstein, in an open letter, criticized the head of state’s position with regard to the Jewish State and occupied Palestine.

Mr. Goldstein is the chief  rabbi of the Union of Orthodox Synagogues of South Africa. He was born in Pretoria and currently lives in Johannesburg. At age 32 Mr. Goldstein was the youngest person ever in 2005 to be appointed to the post of chief rabbi.

Mr. Ramaphosa wrote that the displacements of Palestinians from their homes in the Sheikh Jarrah neighborhood of East Jerusalem by Israeli authorities to make way for Jewish settlements reminded him of what happened to millions of South Africans including his own family under “apartheid.” He was challenged in an open letter by the chief rabbi appearing in the South Africa Sunday Times headline: “Dear Mr. President, there’s no apartheid in Israel.”

Rabbi Goldstein wrote: “The truth is that there is no apartheid in Israel. All of its citizens are equal before the law, have the right to vote, and serve at every level of government.”

He later added in his rebuttal that the situation in Israel had “nothing to do with” the recent occurrences which included, police invasions at the Al-Aqsa Mosque, which the chief rabbi failed to mention in his writing. He continued, “Israel is the only country in the Middle East where Christians, Jews and Muslims can safely practice their faith, and have free access to all the holy sites.”

To say African National Congress (ANC) members were not appalled by the rabbi’s inability to see the similarities between apartheid under South Africa and the same being inflicted, by the Jewish State on its Palestinian captives is an understatement.

A member of the ANC, who served under the Mandela and Mbeki administrations, emailed Africa Watch an open letter, written by a Jewish ANC member, and requested that it be “spread far and wide.”

Appearing in the Sunday Times and titled: “A chief rabbi who is a disgrace to his faith and to human decency,” the former South African deputy defense minister and former minister of intelligence, Ronnie Kasrils took the chief rabbi to task.

“Goldstein joins the chorus about Hamas rockets, crying Israel’s right to self-defense while it pours a rain of death into one of the most densely crowded areas in the world, an open-air concentration camp from which its two million inhabitants have no place to run. Eleven days of sheer hell in which about 250 people were killed, including 66 children and 29 women, and 1,900 were wounded,” wrote Mr. Kasrils.

“What kind of people smash a small, densely populated territory to smithereens because they sustained 12 deaths? Israel falls into the category of the most heinous regimes in the world.”

Addressing Mr. Ramaphosa, Mr. Kasrils wrote, “As touched as I was by your newsletter, so was I appalled by the response to it from chief rabbi Warren Goldstein. His letter to you (Sunday Times, May 23) is bereft of any sense of compassion and justice. Not a word of pity for the hundreds of innocent Palestinians, including women and children, who have perished in Israel’s so-called precision bombing.

“He refers to ‘peace’ and ‘truth,’ but it becomes clear that these are hollow words. In his version of ‘the truth,’ Israel’s onslaught ‘has nothing to do with’ what he refers to as ‘a property dispute’ and ‘pending evictions’ in the East Jerusalem neighbourhood of Sheikh Jarrah, regarded as the cause of Hamas and Islamic Jihad’s retaliation out of Gaza.”

The former South African cabinet member concluded by stating the fact that all Jews don’t support Israel’s Zionist regime. He wrote, “… numerous devout Jews interpret the Hebrew Bible very differently to Goldstein and his ilk. His views are not representative of Jews in general, as seen in many protests around the world. Indeed, from the founding of the Zionist movement until well into the 20th century, Zionism remained on the fringes of world Jewry.”

“When the architect of political Zionism, Theodor Herzl, formally launched the movement in Europe in 1897, three sceptical rabbis of Vienna travelled to the holy land to investigate. Observing a prosperous and thriving Palestinian society, they reported back: ‘The bride is indeed beautiful, but is already married.’”

Concluding his response to Rabbi Goldstein and Mr. Ramaphosa, Mr. Kasrils urged the president and minister of international relations and co-operation, Naledi Pandor, “who, like you, has spoken with moral fortitude on this issue—not to allow our foreign policy to be influenced by those who support apartheid, colonialism and land theft.