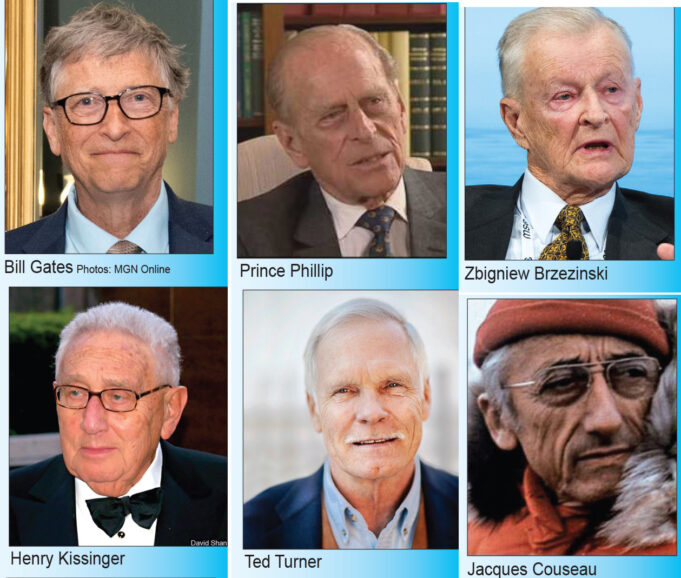 COVID-19 “vaccines” are the latest weapons of the depopulation program envisioned by Henry Kissinger in his now-infamous secret 1974 National Security Study Memorandum (NSSM) 200. The memo was titled “Implications of Worldwide Population Growth for U.S. Security and Overseas Interests,”

Wherein Kissinger argued that for America to control the strategic resources of Third World nations it must actively reduce their populations by millions of lives.

This was nothing new. Kissinger simply reinvigorated a culling strategy that had been successfully deployed for more than 500 years.

They have used several devious means to accomplish their aims, including the poisoning of food and farmland (as with Agent Orange), the infliction of famine and disease, the waging of wars, and the deployment of vaccines.

As CIA scientist Nathan Gordon testified, “the only way that you could kill those large numbers of people as related to the quantity of stockpile [is] to put some of them in one long line and inoculate each and every one.”

When Columbus first arrived in 1492, historians estimate that about 145 million people lived in the western hemisphere. By 1691, the population of Indigenous people had declined by 95 percent, to just 15 million.

By 1930 whites had managed to isolate the Red man on “reservations” and reduce his population to a mere two million. In the Trans-Atlantic slave trade Europeans devastated the continent and reduced Africa’s population by untold millions, a cataclysmic holocaust that opened up the interior for centuries of exploitation.

No one on earth but the white man can claim to have committed two separate holocausts in two separate hemispheres simultaneously—a world record. The Most Honorable Elijah Muhammad wrote in 1969:

“The enemies of Allah (God) are working to reduce the population of the Planet Earth by means of poisoning the human beings and by setting up birth control laws under very wicked devices in order to rid the earth of people according to their idea of controlling the increase of the races and nations of the earth. This is a wicked thing.”

The battle ground for this wicked policy is the Black woman’s womb. In America under slavery, she became a breeding factory for producing ever more forced laborers.

George Washington was breeding Black human beings on his Virginia plantation and according to historian Henry Wiencek, “he wanted teenaged slaves, including girls with a long period of childbearing ahead of them. Washington was growing laborers as if they were a crop, to make himself self-sufficient as a slave owner.”

At one point Washington enslaved 216 Africans, 98 of them children, showing that the “Father of His Country” was breeding human beings for the Southern slave markets.

A 108-year-old ex-slave named John Smith was interviewed in the 1930s and he recalled that his “marster” owned three plantations and three hundred slaves, but started out with just two Black women.

This all reversed itself once the massive immigration of Europeans commenced after the Civil War and “emancipation.” The Black woman’s womb, once needed for its production, was now targeted for destruction.

Whites openly spoke of Black genocide, as the eugenics movement ramped up and became the “science” behind the American policy of forced sterilizations, abortions, and mass contraception.

Thousands of “defective” Americans were sterilized under this American depopulation program, which became a model for Adolf Hitler and his Final Solution. (Edwin Black, “Eugenics and the Nazis—the California connection,” Nov. 9, 2003, posted https://www.sfgate.com/opinion/article/Eugenics-and-the-Nazis-the-California-2549771.php)

At the same time, money began to flow into the eugenicists’ coffers from prominent people like Albert Lasker, who ran the top advertising firm in the world, Lord & Thomas.

He and his wife Mary were passionate white supremacists, and it was Lasker who convinced the mother of the eugenics movement, Margaret Sanger, to adopt the more user-friendly name “Planned Parenthood,” an organization that has performed 345,000 abortions a year, and a large portion of the 300,000 yearly abortions of Black babies. Their body count is an estimated 247 Black babies every day.

In 1977, Ray Ravenholt, the director of the State Department’s Office of Population, publicly announced his agency’s goal to sterilize one hundred million (100,000,000) of the world’s women! (Attribution. St. Louis Post-Dispatch April 22, 1977).

Reflecting Kissinger’s secret memo (NSSM-200), he reasoned that population control is required to maintain “the normal operation of U.S. commercial interests around the world.”

Without it “the world would rebel against the strong U.S. commercial presence.” The agency claimed to have 500 doctors in 60 countries trained in “surgical sterilization” using a frightening medieval device known as a laparoscope (see photo). (Attribution. St. Louis Post-Dispatch, May 1, 1977).

And there are many more examples of the government’s ongoing depopulation conspiracy. The point is that hidden in plain sight is a clear and defined policy that has been pursued with an array of weapons for centuries.

Most often, as these examples show, these plots have manifested through the medical profession and under the guise of some public health initiative—and the COVID19 “crisis” has all the trappings of just such a scheme.

As The Honorable Minister Louis Farrakhan said on July 4th, 2020,

“They’re…now plotting to give seven billion five hundred million people a vaccination. Dr. Anthony Fauci, Bill Gates and Melinda, you want to depopulate the earth? What the hell gives you that right?

Who are you to sit down with your billions and talk about who can live and who should die? That’s why your world is coming to an end quickly because you have sentenced billions to death. But God is now sentencing you to the death that you are sentencing to others.”

Here are some notable leaders and influencers who have made no secret of their aim to depopulate:

Bill Gates “First, we’ve got population. The world today has 6.8 billion people. That’s headed up to about 9 billion. Now, if we do a really great job on new vaccines, health care, reproductive health services, we lower that by, perhaps, 10 or 15 percent.”

Prince Philip “Human population growth is probably the single most serious long-term threat to survival. We’re in for a major disaster if it isn’t curbed—not just for the natural world, but for the human world.

The more people there are, the more resources they’ll consume, the more pollution they’ll create, the more fighting they’ll do. We have no option. If it isn’t controlled voluntarily, it will be controlled involuntarily by an increase in disease, starvation and war.”

Ted Turner “A total population of 250 to 300 million people, a 95% decline from present levels, would be ideal.”

Jacques Cousteau “One American burdens the earth much more than twenty Bangladeshes. … This is a terrible thing to say. In order to stabilize world population, we must eliminate 350,000 people per day. It is a horrible thing to say, but it’s just as bad not to say it.”