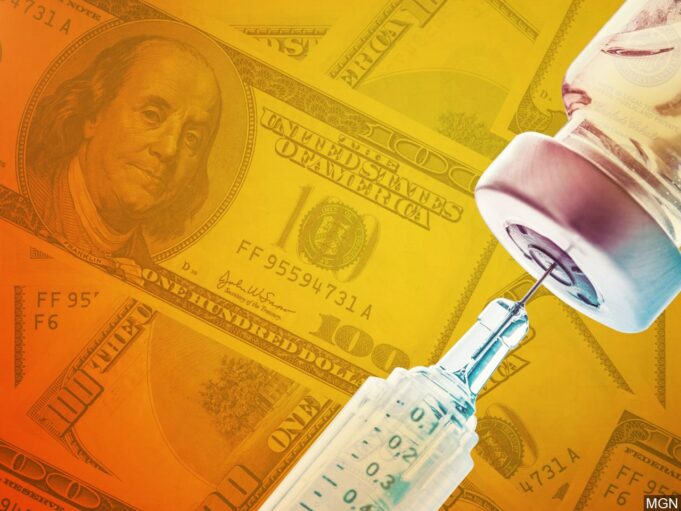 The growing list of these trinkets being used to entice desperate people, and quell questions and concerns violate long held notions against paying people to make medical decisions.

Don’t fall for the tricks. And there are plenty of tricks masking as treats out there: Ohio is selling people on the “Ohio Vax-a-million” state lottery and plans to give away $1 million to five adults and full scholarships to teens who get the shot. Money for “Ohio Vax-a-Million” will come from existing federal coronavirus relief funds, according to state officials.

The Kentucky Lottery is giving away coupons for a free Cash Ball game ticket to adults who get their first or second vaccine shot at Kroger or Walmart stores.

You can add to that snacks and food such as rice, cookies, crackers, chips and commissary packages the Maryland Department of Public Safety and Correctional Services is offering to beguile inmates into getting the so-called vaccine.

New Jersey is offering residents 21 and over who get vaccinated free beer for a shot.

The state of Maine is offering free hunting or fishing licenses, and LL Bean gift cards or other prizes to residents who get their shots by Memorial Day.

“That is good old-fashioned bribery,” said Debra Furr-Holden, a professor of public health at Michigan State University, in a recent article published by www.bridgemi.com/. “Most people would do anything for a million dollars and that’s not the (reason) we want them to get the vaccine.”

“Furr-Holden said researchers can only offer nominal rewards to subjects for studies because the reward cannot be so big that participants are blinded to the potential risks,” the article explained. Dr. Furr-Holden told the news outlet the “million-dollar vaccine lottery obliterates that equation.”

Bryan Towey, in Forbes magazine earlier this year, spoke out as founder and CEO of The Bryan Towey Organization. “My organization will not be offering incentives to employees who choose to take the vaccine. The decision to take a vaccine is personal and should not involve outside influences. While many companies may be antsy to get back to normal as soon as possible, getting involved with the medical decisions of employees is a slippery slope,” he said.

Meanwhile, Forbes added, “Get Golden Visa decided against offering incentives. After considering the benefits and disadvantages, Charles Taylor Harris said, ‘ … there are the legal concerns, particularly in a liability-heaven like the U.S. We ultimately decided not to go ahead with a vaccine compensation for our employees in order not to cause any liability issues. …’

“It won’t be long before we start seeing legal ads reading ‘If you received the Covid-19 vaccine in 2021, you may be entitled to compensation.’ ”

“Another downside, according to Ross at Test Prep Insight, is that a vaccine incentive plan, ‘… may upset certain segments of workers. With the politicization of the vaccine, mask policies and the regulatory environment that has evolved around Covid, offering incentives for getting the vaccine may be seen as a political move by some employees,’ ” Forbes noted.

Emily A. Largent, J.D., Ph.D., RN1 and Franklin G. Miller, Ph.D., tackled the subject in a JAMA article. The title of the piece was “Problems With Paying People to Be Vaccinated Against COVID-19.” JAMA is an American Medical Association journal.

The January article noted that recently “several individuals from across the political spectrum have proposed paying cash incentives for COVID-19 vaccination.”

The authors, who weren’t anti-vaccine, still cited problems in paying people to play the experimental vaccine game. One issue, “some might feel that a substantial monetary incentive for vaccination is coercive. While this is a misconception that confuses an offer with a threat, there is a genuine ethical concern about the influence of such an incentive on decision-making.

Offering payment as an incentive for COVID-19 vaccination may be seen as unfairly taking advantage of those U.S. residents who have lost jobs, experienced food and housing insecurity, or slipped into poverty during the pandemic. COVID-19 has shone a spotlight on the substantial inadequacies of the social safety net in the U.S. As individuals and families struggle, some people might feel they must accept a vaccine in order to, for example, purchase food or pay rent. They might feel they have no choice but to be vaccinated for cash.

It is deeply problematic that the government would offer cash incentives to promote vaccination when it has failed, in numerous instances throughout this pandemic, to offer money or other supports needed to ensure that the basic needs of many people are being met. This concern may be particularly pronounced in Black and Brown communities, which have been disproportionately affected by both the health and economic consequences of the pandemic.

“Fourth, COVID-19 vaccine hesitancy is rooted in concerns such as the warp speed development and approval of vaccines, politicization of the broader pandemic response, and even denial that the pandemic is real. It is unclear that offering incentive payments can or will overcome apprehensions like these. Rather, cash incentives might reasonably be expected to heighten these apprehensions or raise new ones, as offers of payment are often understood to signal that a behavior is undesirable or risky.

In a climate characterized by widespread distrust of government and propensity to endorse conspiracy theories, those who are already COVID-19 vaccine hesitant might perceive that the government would not be willing to pay people to get vaccinated if the available vaccines were truly safe and effective. Incentive payments might also stoke new fears and, perversely, increase resistance to vaccination,” they argued.

Their arguments against vax bribery and other examples should help us to stop, think hard and say, “no thank you.” There is an old saying that you can’t get something for nothing in America. When you’re dealing with the U.S. government it’s especially true.

Are a couple donuts or baseball tickets worth your future health and life? Is life really that cheap?