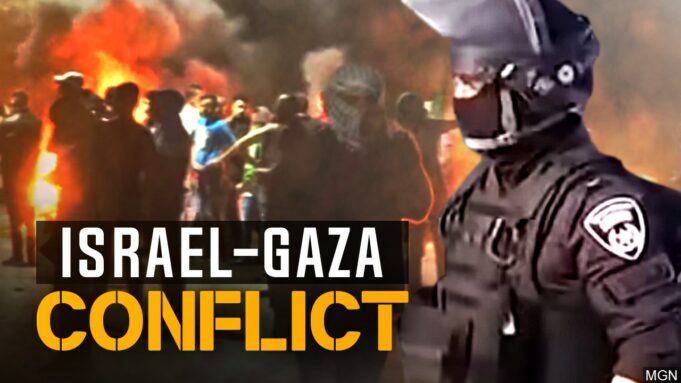 Bloody battles have exploded again with Israeli atrocities against Palestinians, but where will this end?

The bombings, killings, protests and slaughter of outmatched Palestinians is continuing as Israelis exert deadly force and might backed by the arms, the money and the support of the United States.

In a conversation, the Honorable Elijah Muhammad, patriarch of the Nation of Islam, once spoke with the Honorable Minister Louis Farrakhan, his top student and servant, about war and the ultimate cost of war.

He warned America, the world’s greatest superpower, will be forced out of the Middle East. Min. Farrakhan asked, will there be bloodshed? “Plenty,” warned the patriarch of the Nation of Islam in a prophetic one-word answer.

“War is coming to the Middle East because the Messenger said so,” said Minister Farrakhan.

And if America is coming out of the Middle East what about Israel? She certainly cannot stand alone.

The rising tension, fighting in Israel is part of that which will ultimately help ignite the region. While the United States stands with the Zionist state, rights experts, progressive movements and many nations are condemning human rights violations in Israel.

Despite those criticisms, the American Jewish Committee and others are pressing and condemning all who are begging for an end to the bloodshed and calling for true justice. They have even targeted Sen. Bernie Sanders, who is Jewish, for calling on America to change her actions and stop being an “apologist” for Israeli wrongs.

“Let’s be clear. No one is arguing that Israel, or any government, does not have the right to self-defense or to protect its people. So why are these words repeated year after year, war after war? And why is the question almost never asked: ‘What are the rights of the Palestinian people?’ ” asked the senator from Vermont.

“And why do we seem to take notice of the violence in Israel and Palestine only when rockets are falling on Israel? … For years we have seen a deepening Israeli occupation in the West Bank and East Jerusalem and a continuing blockade on Gaza that make life increasingly intolerable for Palestinians. In Gaza, which has about two million inhabitants, 70 percent of young people are unemployed and have little hope for the future,” he wrote in a May 14 op-ed.

“Over more than a decade of his right-wing rule in Israel, (Prime Minister Benjamin Netanyahu) has cultivated an increasingly intolerant and authoritarian type of racist nationalism. … It is shocking and saddening that racist mobs that attack Palestinians on the streets of Jerusalem now have representation in its Knesset,” Sen. Sanders said. “These dangerous trends are not unique to Israel.

Around the world, in Europe, in Asia, in South America and here in the United States, we have seen the rise of similar authoritarian nationalist movements. These movements exploit ethnic and racial hatreds in order to build power for a corrupt few rather than prosperity, justice and peace for the many. For the last four years, these movements had a friend in the White House.”

“In the Middle East, where we provide nearly $4 billion a year in aid to Israel, we can no longer be apologists for the right-wing Netanyahu government and its undemocratic and racist behavior. We must change course and adopt an evenhanded approach, one that upholds and strengthens international law regarding the protection of civilians, as well as existing U.S. law holding that the provision of U.S. military aid must not enable human rights abuses,” said the Jewish senator.

But Zionist groups are not listening. Organizations like the American Jewish Committee are sending out fundraising appeals and raising money as the blood of Palestinian children runs in the streets. Shameful. Disgusting. Atrocious.

The Holy Qur’an, the Islamic book of scripture, warns that those who do not heed good advice are doomed. The law of Moses condemns the unjust taking of lives.

The Honorable Elijah Muhammad warns that no individual nor nation can escape the law of justice today. We are living in the day of God’s Judgement and a time when the consequences of deeds, individual deeds and national deeds, cannot be averted except that repentance quickly sets in.

“Every human being wants full and complete freedom, and anything that deprives us of that which God desires for us, puts itself in a position opposite God,” Min. Farrakhan observes in an article in this week’s paper which is a must read. “Ultimately every oppressed people, every enslaved people, every people not free finds the way to become free. Everyone who takes the road of The Oppressor, The Enslaver, The Exploiter is ultimately set down.”

The Minister continued, “The Honorable Elijah Muhammad taught us that Justice is The Principle of Fair Dealing. According to Webster’s Dictionary, justice is ‘fairness, fair play, fair mindedness.’ Justice is ‘evenhandedness, impartiality, objectivity’; it’s a ‘lack of bias, a lack of prejudice.’ ”

Justice is not the order of the day in this world. Might makes right and power over media twists and manipulates truth to justify the acts of those with money, power and influence—and to shut down the voices of those who object.

America is using her money, power and influence in the wrong way, bowing to the wishes of Israel instead of bowing to the will and principles of justice instilled in the universe by God Himself, who is the absolute judge today.

America is coming out of the Middle East despite her blind backing of Israel fed by the fervor of Zionists who are rejected by many Orthodox Jews. These righteous Jews, following the law Moses, see the ugly, unrighteousness of the apartheid so-called Jewish state. A state that was not set up by the Messiah, but by men using cold political calculations, weapons, depriving people of justice and ever encroaching on the land and lives of Palestinians.

“The Honorable Elijah Muhammad taught us that ‘Justice is The Weapon that God will use in The Judgment of this present world,’ so justice is not just a ‘law that distinguishes between right and wrong.’ … Jesus said: ‘God is not mocked; for whatsoever a man soweth, the same shall he also reap.’ ”

America has sown seeds of destruction and warmongering; she cannot escape the bloody fruit of her evil endeavors.