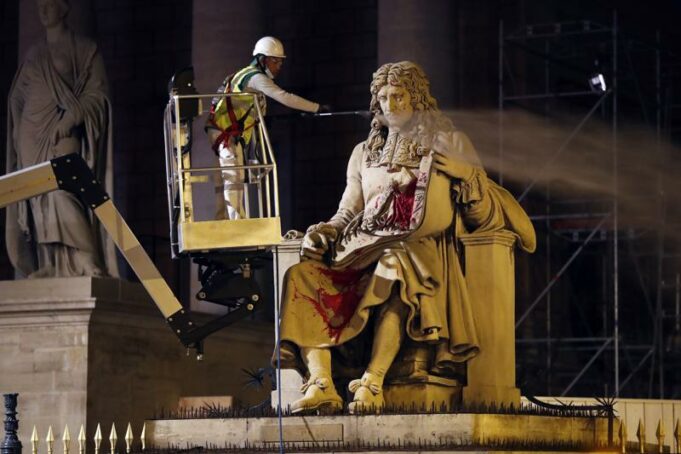 PARIS—A French activist for Black rights went on trial in Paris for defacing a statue of a historical figure from France’s colonial, slave-trading past, calling the protest a political act to denounce deep-seated racism.

Franco Lollia said that rather than vandalize the statue, he improved it by spraying “state Negrophobia” in red paint on its pedestal.

The statue outside parliament honors Jean-Baptiste Colbert, a 17th-century royal minister who helped author rules governing slaves in France’s overseas colonies. Among other cruelties, Mr. Colbert’s notorious “Black Code” allowed for slaves to be branded, have their ears cut off and be executed for escape attempts.

Mr. Lollia told the court May 10 that, in his view, Mr. Colbert committed crimes against humanity. He said celebrating Mr. Colbert with a statue outside the National Assembly shows that the French state “is viscerally Negrophobic even today” and that the statue’s presence is “spitting in the face of all people who look like me.”

Mr. Lollia, who is Black, called the trial “an insult.”

“I am sad to see that history seems to be repeating itself and our voices are still not heard,” he said. “I am really disappointed that the justice system is still so blind.”

The trial coincided with France’s annual commemoration of the abolition of slavery.

Mr. Lollia noted that the day isn’t marked with a national holiday, dismissing it as “a bone for a dog” that fails to adequately commemorate the horrors inflicted on millions of slaves. French President Emmanuel Macron marked the day of remembrance with a wreath-laying and a minute of silence at a Paris monument symbolizing broken chains.

Inside the courtroom, Mr. Lollia’s defense team put France on trial, detailing and denouncing centuries of colonial atrocities. They argued that in the wake of the worldwide wave of fury galvanized by the killing a month earlier of George Floyd, Mr. Lollia shone a necessary light on slavery and Mr. Colbert’s role.

Calling slavery “the greatest injustice in the history of humanity,” defense lawyer Guy Florentin said the paint on the statue represented “the blood of victims demanding reparations.”

“There was no degradation, it was just a bit of paint,” he said. “I would have left it as it was.”

The sweat-top and face mask that Mr. Lollia wore to the trial both had the words “Anti-Negrophobia Brigade” printed on them. The back of his T-shirt described “Negrophobia” as a  “weapon of mass destruction that doesn’t admit its name” and said: “Let’s arm ourselves to the hilt to fight it.”

The judge said video footage of the graffiti attack showed him hurling paint at the statue and spray-painting its base.

“It was a political act,” Mr. Lollia said. “It wasn’t a degradation. It was a contribution. It was even an improvement.”

The charge of defacing property is punishable by a fine or community service. The prosecutor asked for a fine of $970. The judge said she would deliver her verdict on June 28.

Mr. Lollia’s lawyers argued that he acted in self-defense. His attorney Georges-Emmanuel Germany said the judge should consider France’s past behavior as “a criminal state” in weighing Mr. Lollia’s act.

“Colbert is a major figure of this colonial past, this past where Black people were not recognized as human beings,” he said.

“The system itself is Negrophobic from the moment it doesn’t put into question the history,” he said. “France is capable of healing from its Negrophobia and from its state racism in general, but the French state must learn to face its history, and not only part of the history it likes.” (AP)