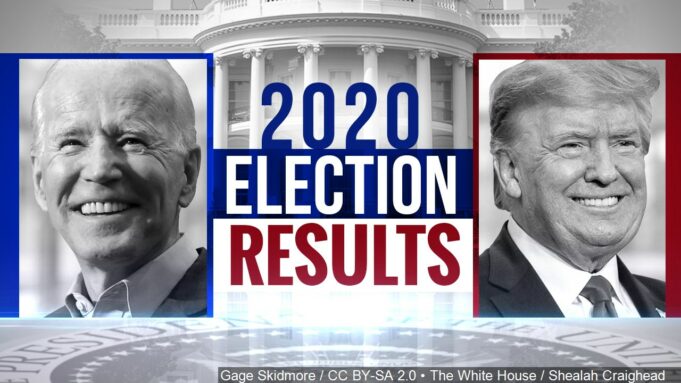 WASHINGTON—If 585,000 Covid-19 deaths, widespread fuel shortages, all on the eve of a new summer hurricane season aren’t enough bad news confronting leaders in this country, a dangerous political meltdown, fueled by the “big lie” that the 2020 presidential election was stolen from Donald J. Trump, is also on the horizon and its adherents are increasingly desperate and growing in number.

Many, if not most Republican voters, mostly White voters, and a majority of GOP Congress members—who were themselves elected on the very same ballots they now claim are fraudulent—believe that the presidential victory was stolen from Mr. Trump. Democratic elected officials call such thinking the “big lie.”

Even though the GOP is in an open civil war with itself, many Democrats fear that despite cannibalizing their own members, Republicans will wrest a majority of seats in the House and will win back the Senate majority in the 2022 elections.

Republican House members have become completely unhinged. At a hearing May 12 concerning the Jan. 6 violent breach of the U.S. Capitol intended to stop the certification of Joe Biden’s Electoral College victory which led to five deaths and more than 400 arrests, Rep. Andrew Clyde of Georgia claimed the attackers breached the Capitol in an “orderly fashion” that resembled a “normal tourist visit.”

That same day, House Speaker Nancy Pelosi called for an Ethics Committee investigation of Rep. Marjorie Taylor Greene (R-Ga.) for what Mrs. Pelosi called the “verbal assault and abuse” of Rep. Alexandria Ocasio-Cortez (D-N.Y.). The QAnon supporting Rep. Greene, who boasts of carrying a concealed weapon on the Capitol grounds, tried to chase down Rep.

Ocasio-Cortez and called her a “coward” for not agreeing to a debate on the Green New Deal. This is not the first altercation Rep. Greene has had with a Democratic colleague. In January, Rep. Cori Bush (D-Mo.) moved her office away from Rep. Greene’s floor in the House Office Building “for the safety” of her staff after she confronted the Republican for not wearing a mask.

The only credential protecting GOP members from their party’s circular firing squad today is total loyalty to twice-impeached former President Trump, and his claim that the election was stolen from him. Rep. Liz Cheney (R-Wyo.) was ousted from her number three leadership position as Republican Conference Chair over her refusal to accept Mr. Trump’s insistence that he won the 2020 election.

Before the January 6 Capitol insurrection, Rep. Cheney voted in favor of Mr. Trump’s legislative proposals 93 percent of the time. She was also one of 10 House Republicans who voted to impeach him over his role in that attempted coup d’état. Ms. Cheney said she believes the vote against her is, “an indication of where the Republican Party is” and that she is determined to prevent Mr. Trump from ever returning to the White House.

“We cannot let the former president drag us backward and make us complicit in his efforts to unravel our democracy,” Ms. Cheney said before she was ousted. “Down that path lies our destruction, and potentially the destruction of our country,” she added, according to a source in the closed-door GOP Caucus session. “If you want leaders who will enable and spread his destructive lies, I’m not your person. You have plenty of others to choose from. That will be their legacy.”

After her ouster, Rep. Cheney told reporters: “We have seen the danger that (Mr. Trump) continues to provoke with his language. We have seen his lack of commitment and dedication to the Constitution, and I think it’s very important that we make sure whomever we elect is somebody who will be faithful to the Constitution.”

Some independent observers are also concerned about the GOP’s lurch toward authoritarianism. “Well, we’re at a very dangerous and dismal moment in the history of this country,” Dr. Gerald Horne, professor of History and Africana Studies at the University of Houston told The Final Call.

“Let me point out the most troubling, perhaps, news of recent days, which is a letter signed by scores of retired military brass, including John Poindexter, who you may recall was implicated in the Iran-Contra scandal of three decades ago, that basically mimics MAGA talking points with regard to a so-called stolen election, with regard to Mr. Biden leading the country over the cliff towards quote ‘socialism’ unquote,” Dr. Horne continued. “And then when you combine that with the scourge of Liz Cheney, a rock ribbed, conservative Republican. …

“She has been scored and denounced for helping to orchestrate an extraordinary letter that appeared in the Washington Post a few days before January 6th, from 10 former Pentagon chiefs, including her dad, Dick Cheney, warning the military against becoming involved in U.S. domestic politics.

In retrospect, when you combine that piece in the Washington Post with what I mentioned at the top concerning military brass, suggesting that Mr. Biden is leading the nation towards socialism, you get an idea that the U.S. military is becoming restless.”

The country has clearly reached a turning point, according to many Washington observers. “I think that at the heart of it, you run the risk of having a political party that has shifted from competing for power, to doing anything it can to achieve power,” John Nichols, national affairs correspondent for The Nation told this writer.

“That’s a very, very different dynamic,” he continued. “When you have one party that has no limit on how it will seek to achieve power and that includes insurrection, even violence, that changes the dynamic for the whole system. It becomes very, very hard to maintain a traditional political competition.

Then it’s always an urgent circumstance where if these guys win, ultimately where you end up is a point where your politics is no longer about issues. It’s really about whether you allow the dangerous force to rise to power. That makes it a lot harder, frankly, to get a lot done because so much of the energy is framed around building coalitions to prevent bad things from happening.”

Republicans, who have moved closer and closer to openly adopting a nativist, White tribal agenda, are seeking to restore the antebellum political system when “White power,” in the form of chattel slavery was practiced in half of the country. “Absolutely. Without a doubt. They’re doing the same thing right now,” said Mr. Nichols.

“That’s exactly what’s happened. I mean, they lost. They lost badly and yet they’re denying the loss.” In fact, the Confederates have sought to lionize the losing cause, romantically depicting it as “The Lost Cause,” making “champions” out of the Ku Klux Klan in popular movies such as D.W. Griffith’s “The Birth of A Nation.”

“Really, that’s what 1865 and the aftermath was about,” Mr. Nichols continued. “It was about denying defeat and actually suggesting that somehow out of it, could come victory. The tragedy was that in many senses, they did succeed. They succeeded for generations in preventing the most basic changes from occurring, fundamental changes in people’s lives. It is a very dangerous place to be.”

The worst thing that can grow out of the political direction in which the country is headed, is, according to Mr. Nichols: “Well, fascism of course.”

Can the republic be saved from this dystopian future? “Well, in the short term, probably no,” said Dr. Horne. “In the long term, I would say that ridding the progressive movement, ridding itself of these fallacies and propaganda regarding the so-called democracy in the United States would be a first step in that direction.

“Second of all, the peace movement and I would also say the Black leadership and organizations that are generally missing in action when it comes to foreign policy need to redouble their efforts to prevent a new Cold War this time with China in the crosshairs, because: that, number one, would divert taxpayers’ dollars from health and education to the military; and number two, it could lead to quite frankly a shooting war that would be devastating for our community.

“Well perversely, ironically, and paradoxically, and unfortunately,” Dr. Horne continued, “one of the things in our favor is that the White tribe, as you put it, routinely overestimates their strength.

“You see that from the beginning of this so-called Republic when the slave owners were able to craft the Constitution. They guaranteed their right to own enslaved Africans and then when you have the election of Lincoln in 1860, who at that point was not in favor of abolishing slavery, they still felt that his election was a dangerous signal and they overestimated their strength and went to war and lost everything.

“I think that that lesson needs to be repeated because history could repeat itself, they could lose everything. And sadly, and unfortunately, their loss, considering that they’re at the helm of this ship, USA, this ship of fools, also could mean that we, the low paying passengers aboard the ship of fools, could also lose everything as well.”