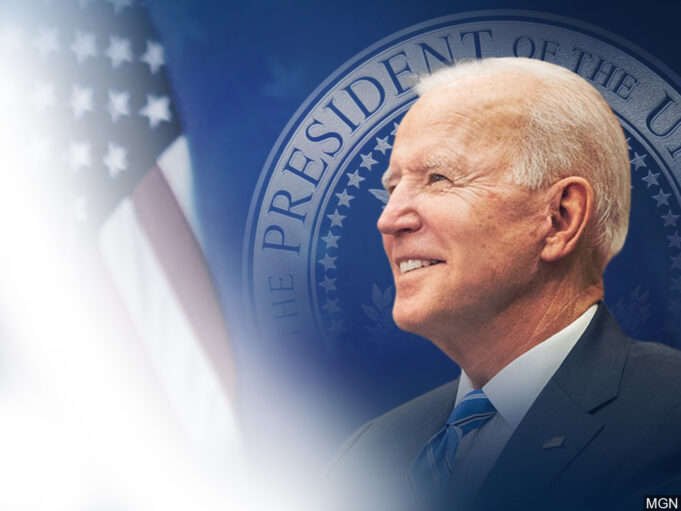 WASHINGTON—After four years in which Donald J. Trump escorted the United States into a rapid descent into unfiltered race hatred and domestic and international policies tilted toward the wealthy, the presidency of Joe Biden was celebrated as a “breath of fresh air” on day one.

Now, after 100 days in office, Mr. Biden has seized on that goodwill, and with the encouragement of Black folks, environmentalists, women, and labor unions, embarked on a “victory lap” around the country. The milestone, while nothing like the achievement of Franklin Delano Roosevelt, who worked with Congress to pass 76 new laws by the end of 100 days, was banking on one major win—passage of the $1.9 trillion American Rescue Plan—passed without a single Republican vote in either the House or the Senate—which Mr. Biden signed into law on March 11.

In his first address to a joint session of Congress April 28—the eve of his 100th day in office—Mr. Biden unveiled his $1.8 trillion American Families Plan, which includes $1 trillion in new spending and $800 billion in tax credits aimed at expanding access to education and childcare. He also called on lawmakers to support his plan to invest heavily in the country’s infrastructure, to expand the social safety net, in part by funding it with $4 trillion in taxes from the rich and corporations.

Further, Mr. Biden condemned systemic racism in this country and called on Congress to pass the George Floyd Justice in Policing Act of 2020. Together, these earned high marks from the general public according to a poll by the Monmouth University Polling Institute. The poll found that 68 percent of Americans support the proposed American Jobs Plan, while 29 percent oppose it. And, 64 percent support the president’s plan to expand healthcare and childcare in the American Families Plan.

But Republicans—including Sen. Tim Scott (R-S.C.) the Senate’s sole Black GOP member—roundly criticized the president for his critique of the state of race relations, and even for other policies he did not mention in his address. They found very little to cheer for, including Mr. Biden’s announcement that his policies were on pace to reduce child poverty in half.

Sen. Scott boasted that his rise from growing up in his grandfather’s house where he picked cotton, to his seat in Congress is evidence that the U.S. “is not a racist country.” Mr. Scott was mocked and condemned. “When you start your history with cotton and are voted into Congress by people who believe that you and your people never should’ve left those fields, everything since seems like an improvement, regardless of how unacceptable the cost to the rest of us,” said Dr. Greg Carr, chair of the Africana Studies Department at Howard University, via Twitter.

Mr. Biden is viewed favorably by some grassroots activists as well. “We need to heal and not fix,” Tia Bell, founder of T.R.I.G.G.E.R, a group of young violence interrupters in Washington, D.C. told The Final Call. “They tried to fix the war on us and through law enforcement. And although, I think, law enforcement is a part of the solution, it’s not the first rank.

So, I think we have a president now that we know that acknowledges that. But we can’t (simply) push grants in the community, either to get our way through this. We can’t grant through it. We can’t (just rely on) law enforcement. So, you got to bring us to the table, and you got to support us, and you got to restore us, and you got to be patient with us. If we’re broken and we’re hurting you, it’s because we hurt.”

And while a panel of Black academics, activists and opinion makers, including Dr. Carr, gave Mr. Biden fair, to good marks after the address during a forum convened by the Institute of the Black World 21st Century, they for the most part overlooked this country’s tender spot when it comes to addressing social needs: endless wars and unconstrained military spending.

“I would say that the most disappointing aspect of Mr. Biden’s performance has been in foreign policy,” Dr. Gerald Horne, professor of History and Africana Studies told The Final Call. “Calling Vladimir Putin a killer, Xi Jinping a thug, heightening tension, not only in the South China Sea, but on the Ukraine-Russia border, is quite reckless and dangerous. The problem is that a major constituency of his, speaking of the Black American community, has been missing in action in foreign policy for decades,” he said.

“Americans are ready for a new foreign policy centered on cooperation, peace and diplomacy,” said Medea Benjamin, co-founder of CODEPINK Women for Peace, via social media. “That’s why it is so disappointing that Biden is, for the most part, continuing Trump’s bullying, militaristic policies on the global scene.”

There is ample evidence, going back to Dr. Martin Luther King Jr.’s loss of favor for opposing the Vietnam War, despite overwhelming evidence that money was being wasted on that war and military spending that was sorely needed to address domestic issues, particularly those that confront Black people.

“Extravagant Pentagon budgets divert scarce resources from higher priority security needs,” Dr. Diana Ohlbaum, Legislative Director for Foreign Policy at the Friends Committee on National Legislation wrote in an article for DefenseOne.com. “People who are Black, Latinx, and Native American are at disproportionate risk of sickness and death from COVID-19, and from the lack of health care more generally.

Yet while the United States has poured more than $6 trillion—yes, that’s trillion with a T—into the post-9/11 wars that have killed more than 800,000 people and made Americans less secure, public health has been chronically underfunded and resources for emergency preparedness have been repeatedly slashed.”

That’s a familiar scenario, one which Black leaders avoid, said Dr. Horne. “Now that’s understandable, because when our leaders and organizations stray into that area, oftentimes they’re bludgeoned into submission. It’s very dangerous and reckless. And so, I would say that there is his lowest grade. I would even give him a D,” he stated.

“I would say that domestically, Mr. Biden has much more latitude, because the Black community is engaged domestically, and that puts more wind in his sail,” Dr. Horne continued. “And so there, I would give him a higher grade, I would say a C.”

“I’m disappointed, but whatever the disappointment I might have with regards to the domestic initiatives is counter-veiled, to a degree, by my recognition of the growing strength of the ultra-right-wing. It’s just out of control. Look at all these bills that they’re pushing through state legislatures, not only to restrict the right to vote, but to restrict the right to protest, including giving immunity to drivers who hit protestors for example.”

Going back even further than Mr. Trump’s term in office, Mr. Biden also compares favorably with President Barack Obama, according to Dr. Horne. “Mr. Biden probably has more latitude as a president, precisely because he’s an older, white-haired, White man.

And I will say this, the part of the contradiction of Barack Obama’s presidency was that obviously he was not willing to lead the charge with regards to anti-racism, but even though that might’ve pleased some of his liberal supporters, it allowed the racist opponent to gain traction and to block him virtually at every turn. So that approach obviously did not work very well. And the fact that Mr. Biden is able to be more aggressive domestically, I think says volumes with regard to some of the weaknesses of the Obama administration.”