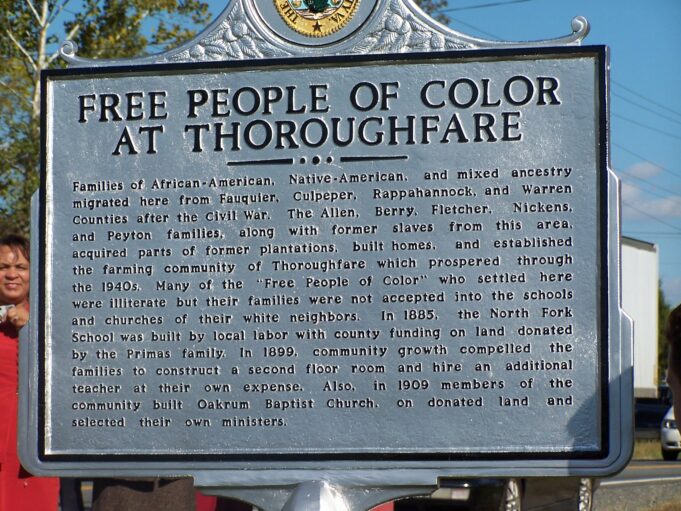 “One cemetery has already been bulldozed and its under investigation to find out how it happened,” Prince William County resident and community organizer Frank Washington of The Coalition to Save Historic Thoroughfare, told The Final Call.

Throughfare is a small town where his family has lived for centuries after it was established by freed slaves in the 1800s.  Descendants of freed slaves and Native Americans still live in Thoroughfare.

“We have three cemeteries that we’re fighting for right now. The Scott Cemetery was actually bulldozed. They’re claiming that they didn’t have any knowledge on this particular cemetery.  That is strange because it’s registered with the county. It was actually registered in 1996 and again, in 2001,” Mr. Washington said.

“There’s records of it holding 75 to 100 graves. The investigation by the Prince William County detectives seemed to be going well but now I’m starting to feel like things are not geared towards finding out the truth.  Instead, it seems they are trying to maybe cover up how this came to be.  The Broad Run Brewery that bulldozed the cemetery already had three violations prior to this for land disturbances,” he added.

The community of Blacks and Native Americans protested the desecration of sacred land with a ceremony to honor those souls who have been recently disturbed. The ceremony gathering included representatives from the Coalition to Protect Prince William County, Alliance to Save Carver Road, the Prince William NAACP, Saving the Circle, American Indian Society, and the American Indian Movement (A.I.M.).

Joyce Hudson, community organizer of the Alliance to Save Carver Road told the group, “Thoroughfare is a sister community to the Carver Road community. It has a strikingly similar story.  The residents, who are descendants of slaves, were self-sufficient.  There was a Baptist church at the center, and there is an ancestral cemetery of freed slaves,” she said.

“Both communities had African Americans leaving the plantation and purchasing land after being freed from slavery. I’m happy to see families, standing up for their rights and to protect their historic community from encroachment, from development,” added Ms. Hudson.

“Development has a place, and I don’t think anyone is against development. But it doesn’t have to be development everywhere. It’s time to recognize that Thoroughfare has a proud history that needs to be highlighted and preserved so residents can pass their cemetery from generation to generation. It’s not too late to stand up for what’s right. I’ll leave you with this question.  How many civil war graves are being threatened?”

In a statement, Shelia Hansen, of the American Indian Movement said: “The Native American community supports our relatives in Thoroughfare as they strive to save our joint history, cemetery and legacy.”

The town of Thoroughfare was established and settled by freed Black slaves and Native Americans. The homes and family cemeteries in this community date back to 1860 and earlier.

Slaves, freed slaves, freedmen/freedwomen, and Native Americans lived and worked on the land of Thoroughfare, Va., are under the threat of having their final sacred resting places decimated or completely removed by developers. Family members are also being denied access to many of these graves.

The Coalition to Save Historic Thoroughfare has established a GoFundMe page and has hired a lawyer.  Its investigating how permits were issued to begin building projects on historical lands that are clearly identified as cemeteries.

“The Broad Run Brewery recently purchased the land. That’s how this all happened. There’s a lot of land grabbing going on here,” Mr. Washington said.   “We’re trying to figure out exactly how all of this has taken place and why it’s happening as quickly as that is it’s happening. They purchased that land.  Then within a short time the cemetery was completely gone completely. They bulldozed it,” he added.

“This same company has also blocked the entrance to a different cemetery. That’s all in the same, in the same community.  We couldn’t get to one cemetery that they blocked off and the other cemetery they bulldozed over. Our question is how, if you purchase land, you’re supposed to have a survey. Why is it that every single entity within that department is saying that no one was aware there was a cemetery there. That doesn’t make sense because the actual paperwork designating the land as a cemetery,” Mr. Washington pointed out.

The company responsible for bulldozing the Scott Cemetery according to Mr. Washington, Broad Run Brewery, was contacted by The Final Call for comment. As of press time they had not responded.

“We need to find out how this happened, why it happened, who knew what, and when.  Now I’m being told well, it’s going to take time.  That whatever is discovered has to go to the Commonwealth (state capital) and they make the following determination if charges will be filed,” added Mr. Washington. —Nisa Islam Muhammad, Staff Writer