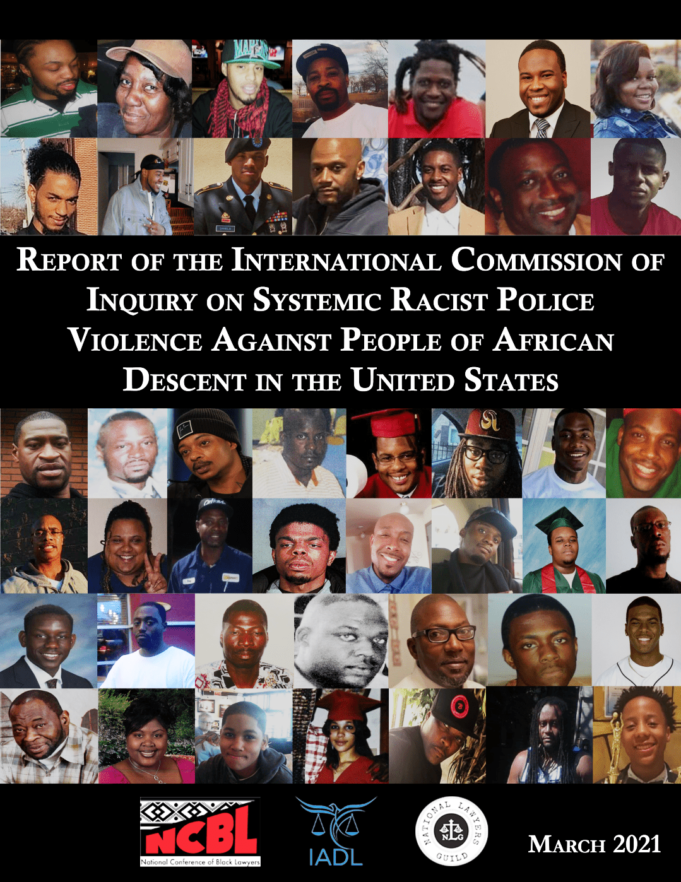 And your covenant with death shall be disannulled, and your agreement with hell shall not stand; when the overflowing scourge shall pass through, then ye shall be trodden down by it. Isaiah 28:18

Can a murderous mind be retrained to deliver freedom, justice and equality to the object of its derision, scorn and hatred? Emphatically not.

With the May 3 funeral of Andrew Brown, Jr., gunned down by sheriff’s deputies in Elizabeth City, N.C., days after the funeral for Ma’Khia Bryant, a 16-year-old Black girl killed by police in Columbus, Ohio, and before that the funeral of Daunte Wright, a 20-year-old Black father, held in Minneapolis, Minn.

Almost countless names are recited and hashtags born as we are slaughtered in the streets by officers empowered and authorized to kill by this society but almost never held accountable for wrongly taking our lives.

What are we suffering from but genocide?

As  defined by the United Nations genocide includes “any of the following acts committed with intent to destroy, in whole or in part, a national, ethnical, racial or religious group, as such: Killing members of the group; Causing serious bodily or mental harm to members of the group; Deliberately inflicting on the group conditions of life calculated to bring about its physical destruction in whole or in part; Imposing measures intended to prevent births within the group; Forcibly transferring children of the group to another group.”

All of the above is happening to Black people in America every day in this country. The Honorable Elijah Muhammad, patriarch of the Nation of Islam, taught that for every 1,000 years on the planet, the White race has murdered 100 million of the Original People or 600 million lives taken in their 6,000 years of existence and rule.

He also warned us that 1 in 1,000 Whites may have some sympathy for our cause but the other 999 in opposition will make that singular individual as if he doesn’t exist at all.

If President Biden, who damaged hundreds of thousands of lives through mass incarceration and other destructive outcomes tied to his 1990s crime bill and punitive legislation, has had a change of heart and wishes to do better by us, can he?

He is not a king but a political leader already hamstrung by members of his own party who oppose federal policing legislation that is viewed as too strong. Now efforts are underway to water down protections contained in the George Floyd Policing Act and negotiations are ongoing to have Black congressmen come back and say weaker legislation is better than nothing. How can that be when our very lives are at stake and ineffective attempts and outright failures to hold police officers accountable result in our deaths? What kind of leadership accepts such law knowing that we are dying in the streets? Why must our lives be sacrificed for the sake of White sensibility and in the name of non-partisan politics? America’s hatred of us has always been and remains a non-partisan affair.

Is it training or is it the nature of Whites and their intense hatred and history as blood thirsty murderers of Black people? Their death dealing shock troops in blue uniforms almost never show mercy. We are their targets because of evil desires stemming not from a police uniform, but a deadly instinct that is in the very nature of White people. It comes fully to the fore when dealing with us, but they cannot enjoy peace with one another. Have you already forgotten the deadly assault on the U.S. Capitol and attempt to overthrow the government instigated by President Trump on Jan. 6?

How do you explain any excuse for inflicting pain or injury or lethal force on Black people? Why is any technique allowed in inflicting pain, injury or death on us? You are seeing the nature of a beast coming into its full expression before your very eyes.

After we are killed, collusion sets in between prosecutors, grand juries, coroners, and investigators to justify the murder of Black people. Instead of demands for justice, the weak answer comes back more training. More millions of taxpayer dollars spent, millions more in settlements for wrongdoing and fatal misdeeds and more billion dollar budgets in major departments? That’s the solution?

As a report recently released by the International Commission of Inquiry on Systemic Racist Police Violence, declared, “The Commissioners find that the brutalization of Black people is compounded by the impunity afforded to offending police officers, most of whom are never charged with a crime. Nearly all of those who do face charges are acquitted or escape time in custody. Since prosecutors rely on officers for investigation and testimony, they have an inherent conflict of interest when reviewing police misconduct. The grand jury is complicit by carrying out the prosecutor’s bidding and refusing to indict officers who then get away with murder,” said the report.

Even with the limited murder conviction of former Minneapolis officer Derek Chauvin for killing George Floyd by kneeling on his neck for almost 10 minutes, what sentence will the judge hand down? Will Mr. Chauvin be sentenced to the full extent of the law? How are we even able to utter this question and have no idea what the actual result will be? “Mapping Police Violence reported in 2020: ‘Officers were charged with a crime in only.one percent of all killings by police,’ ”  said the International Inquiry Commission on Systemic Racism and Police Violence Against Blacks in America, a United Nations mandated project and report released April 27.

Since the techniques former cop Chauvin used in the death of George Floyd were widely repudiated by his department and police departments around the country, where did the training come from? Was it police unions and organizations or is it tied to Israeli training provided to American police forces? Are Israelis training U.S. cops with their brutal methods to break the bodies of Black people? It was an Israeli politician who declared Black youth are a threat to the Zionist nation. How do you think these people react to threats? Many Jewish groups have declared the Black Lives Matter movement anti-Semitic because some activists called for justice for the Palestinians. And when Black youth were teargassed by American law officers in Ferguson, Mo., during the 2014 uprising after police killing of Mike Brown, Jr., it was Palestinians who told their Black brothers how to treat themselves after the assaults. The Palestinians had suffered from the same attacks from U.S. made weapons launched by Israeli authorities.

Despite the Anti-Defamation League having a long and troubling history with U.S. law enforcement and training American cops in the apartheid state, Jewish leaders seek to deny any connection between their training and law enforcement techniques used in America. Prof. Gary Fields tells a different story.

“The knee of officer Derek Chauvin on Floyd’s neck is uncomfortably similar to what is a daily routine in Israel—violent Israeli police applying the same tactic to the necks of innumerable Palestinians. I have witnessed this tactic against Palestinians on numerous trips to the Palestinian West Bank,” wrote the U.C. San Diego professor and author of “Enclosure: Palestinian Landscapes in a Historical Mirror” in San Diego Post Tribune commentary last summer.

“At the initiative of organizations such as the Anti-Defamation League, police officials throughout the U.S. began to travel to Israel for training in so-called counterterrorism and counterinsurgency. At the same time, Israeli military and police officials visited their counterparts in the U.S. and so began two decades of close cooperation between the two,” he noted. “In the present moment, when the nation is looking at itself in the mirror and asking how it is that there are so many George Floyds while at the same time the country’s jails are filled with people of color, why is this relationship between police forces in Israel and America so critical for Americans of conscience? It is critical because the most salient attribute of the police environment in Israel is the fact that the police and military are more intimately intertwined than almost any other country. The Israeli police are highly militarized, and the Israeli military is often involved in police operations. Such operations are directed primarily against the Palestinian community. Consequently, when American police officials learn from their Israeli counterparts, they are observing a fully militarized environment for law enforcement directed against a community of color.”

Those who hate you will not stop killing you, no matter how much you try to reason with them. The sad truth is you cannot reason with a beast. Our salvation is only in seeing our enemy for who he is and separating from him as Jehovah decreed for the children of Israel in the bible. You may not like it, but your life depends on it.