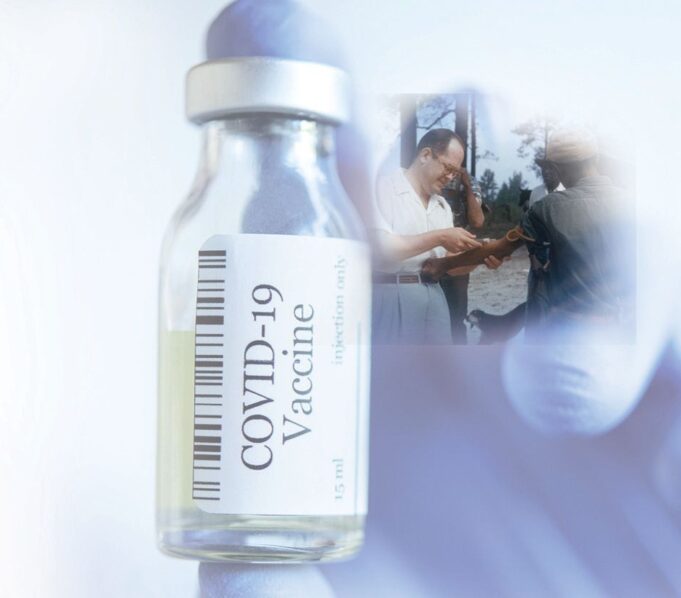 The Honorable Minister Louis Farrakhan has warned the Black community in the United States and on the African continent against getting vaccinated by their open enemy, due to a history of treachery through vaccines and medication.

“Remember the Tuskegee Syphilis Experiment? Remember what they did to the Native Americans with smallpox in blankets. Remember the vaccine that they gave us for polio? That was cancer itself, contaminated with SV-40. How could you trust them with a vaccine after you know what they have done and that they are capable of doing it again, on a bigger and broader level?” asked Min. Farrakhan, in a major message on the coronavirus pandemic delivered last year.

The numbers suggest many are heeding Min. Farrakhan’s words and obeying divine guidance.

In some areas of the country, the so-called vaccines are sitting on shelves, or being sent back to the federal government due to a lack of demand, according to various health agencies across the United States.

Some are concerned about side effects, others distrust creation of a rushed vaccine and there are concerns widespread use and pushing an “emergency use only” product is not in keeping with standard clinical trials.

The World Health Organization and those enlisted to coerce, persuade, entice, and even bribe Black and Indigenous people to take the shot, have dubbed the rejection or reluctance “vaccine hesitancy.”

Part of that “vaccine hesitancy” is because people do listen to Min. Farrakhan, and he said don’t take it, so they’re not, said Abdul Alim Muhammad, M.D., founder of the Abundant Life Health Attainment Center based in Washington, D.C.

Hesitancy defined by Cambridge Dictionary is failing or delaying to do something immediately or quickly due to nervousness or uncertainty.

There’s plenty to be nervous about regarding the so-called Covid-19 vaccines, with reported injuries of severe side effects logged by the Vaccine Adverse Event Reporting System (VAERS) and incidents shared in news media.

After taking the so-called vaccines developed by Pfizer, Moderna and Johnson & Johnson, people across the United States have experienced death, severe allergic reactions, rare blood clotting, dizziness, and headaches, according to self-reporting to VAERS and incidents covered by news media.

On April 23, the U.S. lifted a pause on the Johnson & Johnson vaccine, saying the benefits outweighed the risks. The pause was recommended after reports of a rare and severe type of blood clot in some individuals who took the shot.

Fifteen women under 50 developed the rare condition, three died and seven remained hospitalized as of April 23, according to the Associated Press.

“We will not accept your vaccine so you can slow down, because whenever you bring it out, it’s for your people. You give it to them because we are not accepting death,” stated Min. Farrakhan, during “The Criterion,” a major message delivered July 4.

“You are the very representative of death itself: the pale horse. Everywhere you have gone in the world, hell went right behind you. We are sick of hell and we are sick of death. So all of you that have made a covenant with death, your covenant is going to be annulled … your agreement with hell will be broken,” continued Min. Farrakhan.

“Let me just clear up the language, because part of the trickery, if you will, or the deception is to remember Yakub (a Black scientist/geneticist) made all of his laborers liars. So when we talk about the Moderna or the Pfizer vaccine as though it is a vaccine, we’re lying,” said Dr. Muhammad.

According to Tal Zaks, chief medical officer of Moderna, it is an operating system, and they are hacking the software of life, argued Dr. Muhammad.

People are lining up to get the shots, due to familiarity, but it’s nothing like what they’ve had before, he continued. People should only volunteer for experimental protocols with informed consent, which none have been given, because all the facts, benefits, and risks associated with the mRNA operating system have not clearly been disclosed, he argued.

“We need to expose it as what it is, instead of falsifying the image. I mean, as bad as vaccines are in general, this is worse than any vaccine ever was,” Dr. Muhammad told The Final Call.

He cited a recent Phase 1, 2 and 3 study published by Pfizer concerning their vaccine as one example.

The document also indicated that women in close contact with one in their group who got vaccinated experienced increased and painful menstruation, and some have reported miscarriages, said Dr. Muhammad.

The so-called vaccine causes the body’s cells to produce the spike and other proteins that make up the coronavirus and what’s been reported proves that’s true, he said.

“The vaccinated person has become a super spreader, a walking disease factory. … And you touch them, or if you breath the same air that they breath, they have infected you,” stated Dr. Muhammad.

Min. Farrakhan outlined several solutions during “The Criterion,” he reminded.

They included his call for independent examination of any treatment approved by the enemy, and access to antiviral treatments and therapies, like interferon, he said.

Interferons are proteins that mobilize to protect the body from cells infected by a virus by preventing those cells from replicating.

The Washington Post published an online headline in late August which read, “The coronavirus disarms the foot soldiers of the immune system. Scientists theorize that boosting them could fight Covid-19.”

“Several trials were underway giving patients immune proteins called interferons, either alone or in combination with other treatments, to see whether they speed recovery,” it continued. “Until now, early-stage treatments have remained elusive. But an improved understanding how the virus disarms some of the body’s immune fighters, called interferons, is creating excitement among scientists who theorize they might be able to counter that process and prevent infections from developing into severe disease,” wrote Ben Guarino.

Researchers caution that many questions about interferon treatments for coronavirus patients remain unanswered. Past clinical studies that tested them to treat several respiratory illnesses showed little or no benefit, but there are promising early signals, Mr. Guarino said.

Dr. Muhammad, the former Minister of Health for the Nation of Islam, who is world-renowned for his clinical research and alpha-interferon treatment of HIV/AIDS in 1995, recommends the broad-spectrum dietary supplement Paximune, which is an alpha- interferon immune booster.