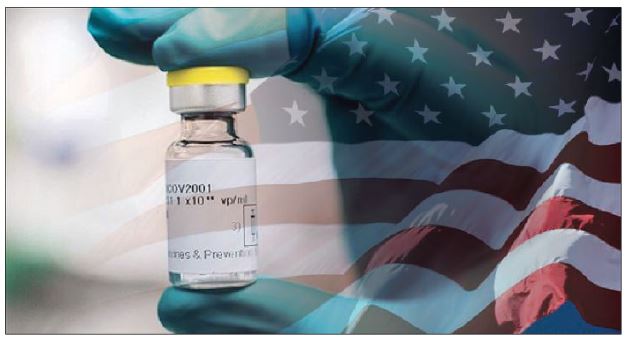 Despite various tactics being used to persuade or coerce Black, Indigenous and other people to take the injections, the United States is still seeing a significant reluctance and refusal to take experimental Covid-19 vaccines.

A mid-April poll indicates potential side effects and swift clinical trials are some reasons why 1 in 5 adults still say they don’t plan to get a Covid-19 vaccine. Fourteen percent said they weren’t sure, according to a new analysis by Morning Consult, a global data analysis company.

Mothers, adults under 45 years old who earn less than $50,000 annually and Republicans and Black adults without college degrees are some of the groups most likely to say they’re unsure or unwilling to get vaccinated.

Seventy seven percent of White adults who want a shot has gotten one, compared with 60 percent of Black adults and 55 percent of Hispanics who want one.

Morning Consult’s analysis was drawn from a survey of more than 30,000 adults and conducted April 13-19. Researchers said vaccine reluctance and access to shots are causing friction in the rollout.

President Joe Biden announced a tax credit for employers who provide paid time off for workers to get vaccinated. He also called on employers to use product giveaways, brand rewards, messaging in-store, PSAs, and direct outreach to customers to boost vaccination numbers.

Black public figures and celebrities have taken the shot publicly in an effort to convince the Black community to follow suit.

“They use the media to convince my people that they don’t have other options, and as long as there’s risk, we should have options,” stated Yaa Simpson, Chicago-based community epidemiologist.

“I’m not against nobody taking no vaccine for no reason. I am against you shutting me down and not giving me options,” Ms. Simpson told The Final Call in a recent interview.

Dr. Anthony Fauci, director of the National Institute of Allergy and Infectious Diseases, even solicited the help of former NFL running back Marshawn Lynch to encourage people to get vaccinated.

Mr. Lynch, in a candid dialogue which premiered April 16 on his Marshawn Lynch Beast Mode Productions YouTube channel, expressed concerns about accommodating religious exemptions when it comes to so-called vaccine passports, and whether people would be denied the opportunity to live a normal life or be restricted to their homes if they refused the Covid-19 vaccines.

His said his goal was to help educate people.

“Anytime we’ve been told that we was going to be in position to have something gave to us or put in our community to help us, it seemed to turn out very bad for us,” he observed. “And then it gets to the point where it’s almost like it’s a gamble, where if I go and take this vaccination, there’s a chance that I can come out of this situation more (expletive) up than I went into it, rather than by taking my chances and rolling the dice, by not getting it and going through the illness, the sickness and coming out,” said Mr. Lynch.

Free Krispy Kreme doughnuts, movie popcorn, steak dinners, days off work, and cash rewards, have been offered in exchange for getting the vaccine. And from New York to D.C., “Joints for Jabs” marijuana activists have given free weed to those who get vaccinated.

Kroger grocery store chain has offered $100-$200 worth of store credit and payments to employees who get vaccinated. But the freebies and cash bonuses can actually backfire, cautioned Davis Asch, M.D., MBA, executive director of the Penn Medicine Center for Health Care Innovation.

Also, health advocates argued, not much is offered in terms of helping people tackle underlying health conditions that exacerbate coronavirus threats in Black and Brown communities.

Incentives often work in health care Dr. Asch told the Association of American Medical Colleges in an interview published April 15. He was not positive about using financial incentives to promote Covid-19 vaccination.

“And if we do offer money, we might actually inflame their concerns. Someone who has a lot of distrust of the vaccine might think, ‘They’d never offer money if this was a good thing,’ ” he continued.

Louisiana has stopped asking the federal government for its full allotment of Covid-19 vaccine. About three-quarters of Kansas counties have turned down new shipments of the vaccine at least once over the past month. In Mississippi, officials asked the federal government to ship vials in smaller packages so they don’t go to waste, reported the Associated Press.

“It is kind of stalling. Some people just don’t want it,” said Stacey Hileman, a nurse with the health department in rural Kansas’ Decatur County, where less than a third of the county’s 2,900 residents have received at least one vaccine dose, the news wire continued.

In Mississippi, small-town pharmacist Robin Jackson has been practically begging anyone in the community to show up and get shots after she received her first shipment of vaccine in April. Demand has been weak, despite placing yard signs outside her storefront celebrating the shipment’s arrival. She was wasting more vaccine than she was giving out and started coaxing family members into the pharmacy for shots, AP reported. “Nobody was coming,” she said. “And I mean no one.”

“We’re afraid, because for the last year, like never before in this country we’ve been censored, heavily censored, so that those of us who are speaking out cannot be heard,” commented Judy Mikovits, who holds a doctorate degree in biochemistry and molecular biology.

“Our world’s been turned upside down. But mainly by individuals who aren’t stepping out and saying no more. I mean, especially with the doublespeak now of the J&J vaccine, especially with AstraZeneca, the stop over in Europe and everything,” she told The Final Call in a recent interview.

On April 13 the U.S. Food and Drug Administration recommended a pause in the use of Johnson & Johnson vaccine due to reports of severe blood clotting. While that investigation is underway, the FDA ordered a shutdown of Emergent BioSolutions, a proposed manufacturing facility for the Johnson & Johnson Covid-19 vaccine, due to quality control problems, according to the FDA.

A triple mutant variant of the Covid-19 virus dubbed the “Bengal strain” has been detected in West Bengal, India, which set another global record in daily infections for a second straight day with 332,730 on April 23, according to the Associated Press.

Daily deaths from Covid-19 rose by a record 2,263 in the previous 24 hours, according to BBC News.

On April 8, a group of 10 Indian labs named a different “double mutant variant” B.1.617, continued The Hindu.

More studies are underway, but there’s suspicion that this variant, whose mutations have also been found in other countries, may be playing a significant role in the nearly month-long exponential rise in cases in India. With over 270,000 new infections a day, the most in the world, India’s health infrastructure is strained at its seams, wrote Jacob Koshy.