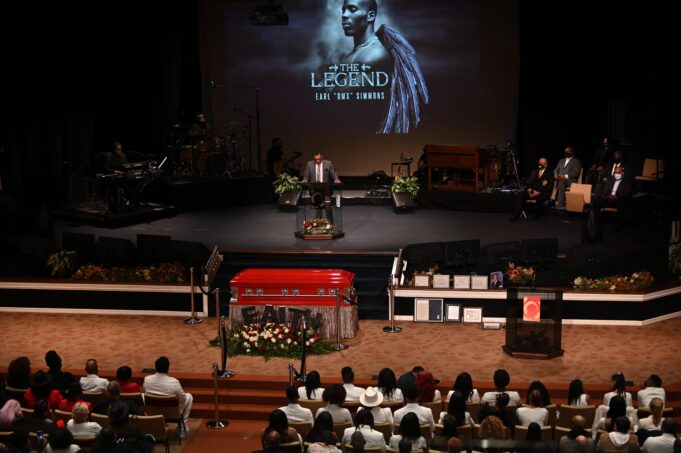 The service at the Christian Cultural Center in Brooklyn was a special moment for Black people and countless others who were touched by the life, the legacy and the love of Earl “DMX” Simmons. In a very painful moment, those who were sorrowing, especially the women and children in his life, were able to enjoy some measure of relief and consolation.

Some of the most poignant and appreciated words came from the Honorable Minister Louis Farrakhan of the Nation of Islam. The Muslim Minister delved deeply into Christian scripture to draw on the life and words of Jesus and other lessons found in the divine books to put the life, suffering and triumph of DMX into perspective.

He spoke lovingly to the audience of the struggle between the carnal and divine in this world’s life, the beauty and power of faith, the wonderful experience of finding life’s gifts. His words offered comfort to children who had lost their father.

“Did you know that your dad’s life and love and pain and suffering shaped him to be a voice for young people and young people all over the world?” said the Minister to the children of the rap icon in the sanctuary. Min. Farrakhan delivered his live message April 25 via Zoom.

“God used his life to teach and show the world that you can come up the way he did, but struggle, and then overcome the struggle and reach beyond your pain, your suffering and yourself to impact the world,” he continued. And, the Minister added, the scripture says, “The bottom rail is going to come to the top and you will no longer be the tail, but God is making you the head.”

“So my dear beloved family, don’t grieve to the point where you can’t see your way out of sorrow. But the scripture says joy is coming in the morning,” said Min. Farrakhan. The Minister thanked Tashera Simmons, the ex-wife of DMX, and all the women in his life for the comfort they gave to a man who suffered much pain.

How could such wonderful words, such wisdom, such love and respect create a problem? That could only happen if one has a deep seated hatred or is blinded by the touch of Satan. Daymond John of the investor TV program Shark Tank and creator of the iconic FUBU (For Us By Us) brand spoke positively about Min. Farrakhan’s words on Twitter. Shortly afterward, he removed the tweet and apologized, saying he was expressing thoughts about the Minister’s words about DMX, not words others accused the Minister of saying.

These same people and news outlets, largely White and Jewish, attacked the entrepreneur and he quickly fell back into line. That was sad. The day and the words were about DMX’s life, pouring out God’s spirit and applying a balm to wounded people. That day was about the work that the Minister has done for over 60 years. Yet these liars and their lies are relentless and any person who tells the truth about this man must be mercilessly attacked.

But such attacks and lies are not going unchallenged. Black Twitter lit up with responses to the John apology and tweet removal. Respondents defended the Minister as a servant of God, a respected elder, a healer, a reconciler and man with a ministry of love. “I am crying my eyes out! This is so beautiful! Thank you Minister Farrakhan!” tweeted @MsMartin 77. “The Honorable Minister Louis Farrakhan said a word today,” added @DrianneBelleza.

“Louis Farrakhan’s words on DMX are so comforting,” tweeted @DJCropTopTot. Others expressed their outrage, anger and disagreement with the lies about the Minister and the John apology. “They love to see a Black man on his knees apologizing,” observed entrepreneur and media maker Boyce Watkins on Twitter. “Some of you Blacks males are so weak.

Especially when it comes to mentioning the bro. Min. Louis Farrakhan. When are we gonna grow a backbone, say what we mean and stick to it?” “Farrakhan speaks at DMX memorial and people run like wimps,” tweeted Kwame Palavin. Others were even more blunt, @PammMalveaux tweeted:

“I am soo f—ing tired (of) white people criticising black people about Louis Farrakhan! The man gave a moving, heartwarming speech about how DMX loved Jesus! Get over it Jewish people unless you want to start talking about your racists behavior.” “Buck broken in just a few hours,” added @IamQuidpro.

It is laudable and necessary that Black America defend a voice of truth in a time of trouble and a man being blessed to reconcile us with one another. That such defense is necessary in the midst of a painful death shows the depth of the hatred that resides in those who oppose us. They see nothing but their lies and their agenda. So long as we see the truth and the need to support one another and the champion God has blessed us with we are on the path to victory.