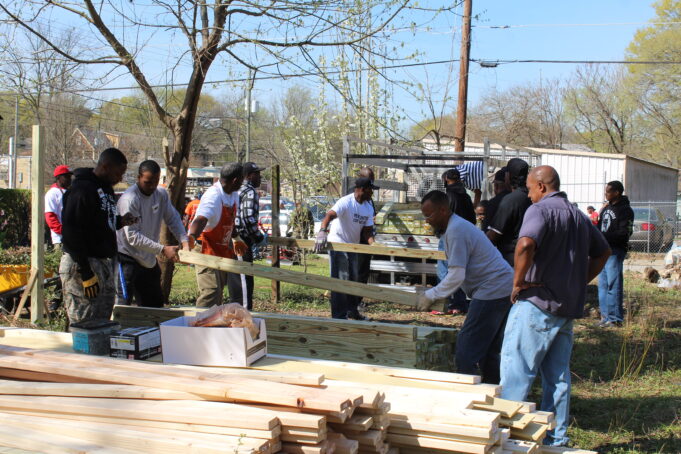 Dr. Carnita Atwater has been battling the city of Memphis over the city’s comprehensive growth plan. Only, she accuses the city of leaving New Chicago, a predominantly Black neighborhood in North Memphis, out of the plan.

Dr. Atwater is the executive director of New Chicago Community Partnership Revitalization CDC. She, along with others across the country, is working to rebuild the wasted cities where Black people live.

The fight to revitalize New Chicago

Dr. Atwater said North Memphis used to be a thriving community, but once many of the businesses left, prominent Black people in the community also left.

“My goal was to revitalize the community, from a community perspective, using our own money. So we were not going to rely on the government, local, state, or federal monies. We were going to pool our money together and develop our own community,” she said.

Through the New Chicago Community Development Corporation, Dr. Atwater and others have established a community hall and a community truck that feeds over 10,000 homeless people every year, and they have remodeled and rented out homes. They have two electric cars used to go grocery shopping for senior citizens, a petting zoo for children, a children’s educational center and emergency management supplies. In total, Dr. Atwater said the New Chicago CDC has invested $150,000 into the neighborhood, cleaning it up and creating jobs.

And yet, Dec. 15, 2020, she and others filed a $20 billion lawsuit against Memphis and Tennessee officials, charging genocide.

“We asked to buy all of the land in New Chicago, the empty lots, the partials, the commercial buildings, all the houses, dilapidated housing. They told us, the mayor of this city of Memphis told us absolutely not. And he said that in front of 122 ministers at my church,” Dr. Atwater said. “So when he told me absolutely not, I said why not. Why would you not want people in their own community to control their own destiny? Because to me, that’s like modern-day slavery, when you’re going to dictate where people live.”

Plans for New Chicago included building more single-family homes, building a section for veterans, assisted living for elderly people, a hotel, an amusement park and a workforce development building. In order to better help her community, Dr. Atwater is running to be the first Black governor of Tennessee.

While she and other Black people in New Chicago are fighting to be able to truly rebuild their community, Nation of Islam Student Minister Abdul Sharrieff Muhammad is making things happen in Atlanta.

When the Honorable Minister Louis Farrakhan of the Nation of Islam said he needed 10,000 Fearless men and women to make Black communities decent and safe places to live, Min. Muhammad, the Southern Regional Minister of the Nation, moved out and established the first 10,000 Fearless House in The Bluff, a crime and drug-ridden neighborhood in Atlanta. The 10,000 Fearless of Atlanta have established a community patrol and have been feeding and clothing people in the community.

“We feed the people every week, twice a week. We clothe them. We give them shoes. And we give them information on where they can go and get medical treatment; they can go and get housing. Those are the main things that we’re doing at the 10,000 Fearless,” Min. Muhammad said. “And dealing with the housing crisis that is in the city, we have to find them different places, because it’s kind of hard now to find them a place to live, but we have referrals, and we’re referring them all over the city to try to get them off the street to have a place to live.”

He and the 10,000 Fearless have also been encouraging people to buy land.

“Do something for themselves as far as taking the empty lots like the Honorable Minister Louis Farrakhan told us to do,” he said. “Use their backyard. You can use your backyard to plant food enough for you and your family and then have a surplus.”

He said they are asking people to build their own homes on their land. “Not only do your farming, but build your own home, or even just to start with a small home; now they’re having little, small homes that you can put up on your land,” he said.

Continuing the program of the Honorable Elijah Muhammad to do for self, Min. Muhammad and his team are in the process of building “The Ark,” a multi-office business complex and shopping center. It will house a boutique, a fish office and offices for other products, Min. Muhammad offers, such as Rise Magazine and Supreme Spring Water.

“We’re doing the fish program, back in the streets going door-to-door so we can take our young boys and put them to work, and they don’t have to be robbing and stealing,” he said. The fish program has been a Nation of Islam mainstay with fish purchased en masse and then brought and sold in Black neighborhoods.

“We’re taking them. We got the pie, we’re going door-to-door trying to get a brother a job. Not just to eat on it, but give them a job.”

Buying back the block

Across the country, Danny Carter is educating the Black community on financial literacy and group economics, through his organization Buy Back the Block in Los Angeles.

He and others took the blueprint of Dr. Claud Anderson, which was working together and circulating the Black dollar as a community. Through Buy Back the Block, they are educating people on home ownership, how to qualify for mortgages, how to flip houses, how to buy rental property and how to fix credit scores. They also do a blanket drive every Christmas.

“Here in L.A., the Black population is 40 percent of the homeless, so the odds are that every time we run into somebody, we’re going to see one of our folks out there. So on the giving side, that’s one thing that we’re doing consistently. And then on the financial literacy and investor side, we were able to raise $51,000 together as a community, just a bunch of regular people who go to work every day but decided that we wanted to work together,” Mr. Carter said. “We were able to raise $51,000, take that money into another market in the Midwest, buy a property, renovate it, sell it for a profit, then turn around and buy a rental property that we have now that we’re renting out.”

He said they want to eventually expand into developing property from the ground up.

“Purchasing lots and being able to build affordable housing and apartments that we can put our people in. Eventually I’d like to be able to get into agriculture and to be able to get back to growing food, being able to get back to having our own water resources,” he said. “We want to continue to be self-sufficient the best we can and do for self. And we want to bring in more and more young people that’s part of the program and get them involved in local politics, so then that way we can be in control of our own destiny.”

For the past eight years, Kamal Muhammad has been helping the Nation of Islam and Black people in Detroit.

When he was the National Secretary of the Nation of Islam, Minister Farrakhan recognized him as a former stockbroker and said to him in a private discussion to come up with ideas that would help the Nation grow.

“After I left the post of national secretary, I did notice that there was an opportunity that I thought I saw in Detroit. And that happened after the market crash in 2008 and 2009. Detroit was the worst hit than any city in the nation, and the fact that it was at one point one of the largest cities in the country and an economic powerhouse in the United States, gave me the opinion that this was an opportunity rather than just a disaster that was going to happen; and that we as Black people could, this time, if we were wise, take advantage of this opportunity,” Kamal Muhammad said. “Maybe it was given to us to take advantage of and put us on an even playing field.”

“The history of the Nation of Islam in Detroit is another factor that led me to look at this as an opportunity specifically for us. We know that Master Fard Muhammad (teacher of the Hon. Elijah Muhammad) came to Detroit and started His work with us in Detroit. So, obviously, the city has significance to us,” he said. “In addition, Minister Farrakhan has consistently stated to me and us in the past that Detroit was like our Mecca, and Chicago was like our Medina, seeing as the trouble that our founders had in Detroit and how they had to move to Chicago to continue to work just as Prophet Muhammad had to move to Medina from Mecca. But at some point, he did go back to Mecca, and at some point, we should go back to Detroit.”

So he launched the Detroit Mecca Project. One factor, he said, was the ability to buy large homes that needed very little work for $5,000.

He was initially by himself in the project, and he told Minister Farrakhan that he felt inadequate. The Minister reassured him and told him Allah (God) would send people. Now, he has real estate professionals helping him along with Student Minister Abdul Haleem Muhammad of Houston, Texas, and Student Minister Troy Muhammad, who is over the Nation of Islam mosque in Detroit.

“We are taught that we must control our community, number one, and we should not rely on others to supply us with the goods and services and all of the materials that we need to survive and live—housing, food, clothing, shelter. We should be able to supply and provide for ourselves,” Kamal Muhammad said.

There’s nowhere else to go

Dr. Atwater said plans of action for community revitalization are important in order to move towards economic development.

“If you look at every city, they have an economic development plan, but it does not include the Black community,” she said. “If we do not create our own plan, we’re going to be behind the curveball, because you can’t come to the table asking anyone for any economic funding, if you’re not at the table with a plan.”

Min. Abdul Sharrieff Muhammad said it feels great to do what Minister Farrakhan asked and to see the results. He urged Black people to join the 10,000 Fearless.

He said anyone who wants to get involved should just do it and should be transparent at all times. He also advised Black people to not wait for perfection.

“Black empowerment is the only answer,” he said. “Everything else is going to lead you down the wrong path.”

(This is one of a series of occasional articles spotlighting efforts of Blacks to do for self, to own reality and make their communities safe and decent places to live.)