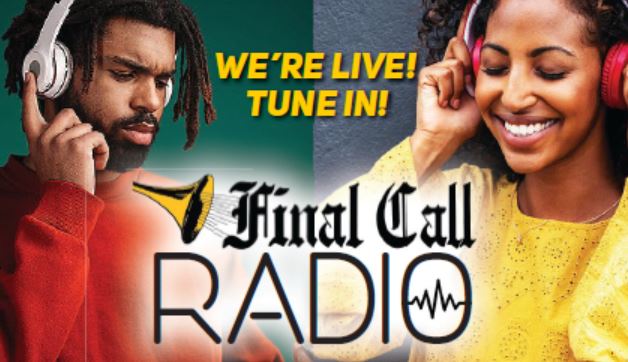 One-hundred-twenty six countries, 975,000 listeners in the United States, and 48,000 listeners around the world. That’s how far Final Call Radio has come since first launching about a year ago.

The platform has carried the voice of the Honorable Minister Louis Farrakhan of the Nation of Islam to the nearest and furthest corners of the world, allowing more than a million people to be exposed to the Life-Giving Teachings of the Most Honorable Elijah Muhammad 24/7.

This “Herculean effort,” as called by Student Supreme Captain Mustapha Farrakhan, who is over the training of the men in the Nation of Islam and a son of Minister Farrakhan, was not achieved on its own. He forged the pathway to bring the platform into existence, along with Michael Saunders, a radio programmer based in Houston.

Final Call Radio recently celebrated a year on air with a successful three-day radiothon fundraising event. But the brewing of the idea began back in the ’90s, at one fateful meeting.

Mr. Saunders called it love at first sight when he first encountered Minister Farrakhan in 1992.

“I could not believe what I was looking at,” Mr. Saunders recalled. He was present at Minister Farrakhan’s dinner table, invited by a close companion at the time. “I think the spirit that he brought in the room in his home was just magnificent.”

He had never met or listened to Minister Farrakhan prior to that meeting, but had only heard of his work in the fight for Black people, and the controversy that surrounded him. That first meeting was the launching pad of Mr. Saunders’ deep dive into Islam.

“I was blessed to be able to hear him speak, and then be able to be around him to ask questions personally about what he spoke about. And then in my study, to be able to ask about what I had read that I didn‘t understand,” he said.

“I said, you know he has so many beautiful student ministers, and they‘re doing a marvelous job. I don‘t think that would be the best way for me to help him,” he said. “And then I said, well, what else can I do? And I said, what is it that I do for a living? What if I took him and his messages––because he has so many of them—and start to build a radio station, and put him on the radio?”

He began looking into purchasing a radio station, but the price point was out of this world. He sat on the idea for some time, and it wasn’t until 2015 that he brought the idea to the Minister. That’s when he traveled to Miami, Fla., to promote Justice Or Else!, a gathering on the nation’s Capitol that marked the 20th anniversary of the Million Man March.

Mr. Saunders traveled from Orlando to Ft. Lauderdale, Fla., where Minister Farrakhan was staying to record an audio interview for a radio show he was programming at the time.

But Minister Farrakhan’s words ran so much deeper for Mr. Saunders.

“I looked at that word ‘time’ and looked it up and looked back at it again and then for some reason, I saw the letters and the word ‘time’ going backwards,” he said. “And when I read it backwards, it read ‘emit.’ And when I looked up the word ‘emit’ it means considered through, or sound. And so, time, and then sending through this radio station is just really, like this is exactly what I believe Allah wants for me because He‘s made me the radio programmer that I am and this is how I believe I could best serve my Nation.”

Mr. Saunders says he’s had a close friendship with Mustapha Farrakhan for years, and that night, they discussed it.

“When we started to have a conversation, I knew that he was very capable as a radio personality behind the scenes to get things going,” Mustapha Farrakhan said. “I knew that it would take a Herculean effort to get it to the stage where we got it launched. I ran the idea past my father, the Minister, but he asked me did I run it through the Executive Council.”

The Executive Council of the Nation of Islam, a group of Laborers appointed by the Minister to help handle the affairs of the Nation, approved the idea. After much research and a meeting with the staff of The Final Call newspaper, Final Call Radio took off in April 2020.

Listeners log in to the Final Call newspaper website to tune directly into information, words and music from Minister Farrakhan at www.finalcall.com.

A vehicle for spreading truth, independence

Mustapha Farrakhan sees the online platform as a vehicle able to go into places The Final Call newspaper may not be able to reach.

“Some of the people that are listening to this radio station all over the world, we may not ever have a chance to physically be in their presence,” he said.

“When I‘ve talked to my brothers over in London, and they are listening to the Final Call Radio, you know, this absolutely helps to soften the hearts of those who listen to be able to really see the validity and the purpose of a mission,” Mustapha Farrakhan said.

He said this is not just true in London, but all over the world.

Before we even get to them, they already have … a small introduction of who we are because they have heard that word [go] out in front of us before we even arrived in a particular city or particular country. They know us already, because of that word.”

The word about Final Call Radio has spread across social media, with people from Jamaica, the Americas and other places promoting the platform on Instagram, Twitter and Facebook. But support ramped up April 2-4, during its first annual radiothon.

“Of all the sounds that are out there, don’t forget the sound of Final Call Radio. It’s the sweetest sound this side of heaven,” he said.

He also personally thanked listeners “from the depth of our heart for your support of this magnificent contribution to Black intelligence, growth and development,” he said. “Continue your support of Final Call Radio. Tell your friends about it and if you support it, I want to thank you for whatever you may give to support Final Call Radio so we can keep it going … and keep it growing.”

According to Mr. Saunders, the radiothon yielded pleasing results and exceeded goals. This kind of support allows the platform to reach more people, which allows the words of Minister Farrakhan to have a transformative effect on more lives.

“Look at how the word transforms the listener,” Mustapha Farrakhan said. “The more people that are able to listen to this word, the quicker it speeds up the resurrection of the mentally dead. So the more we can promote the word to the degree that we as a people rise to that same degree, I believe that the other power that is in power falls.

So, it is very important, in my humble judgment, that we continue to build the listenership to a word that I believe is invincible against any truth about God and the enemy of God that‘s out in the world.”

Many people from different parts of the world have called in to the Final Call Radio feedback line to express how much they appreciate the platform.

Alverda Muhammad from Detroit, Mich., called in and said, “Whoever came up with the concept of [Final Call Radio] is an absolute genius. The producers are absolute geniuses. This is the most beautiful radio I have ever heard or conceived of in my whole life and I just want to say, thank you.”

Aamil Muhammad, a six-year-old from Muhammad Mosque No. 25, called in to say he listens to Final Call Radio every night.

The platform is striking a chord with young people across the world, who are taking it in, in their everyday lives. Students have called into the feedback line to show support for Final Call Radio.

Jair Muhammad, a 19-year-old from Chicago, Ill., said the platform is a beacon of light in a world that promotes darkness.

“Our generation has been kind of engulfed and submerged in iniquity,” he said. “It’s all we see whether it be on social media, whether it be on the radio, whether it be on television––it’s everywhere all the time. And to be able to have an independent platform that‘s giving us unadulterated truth 24 hours a day, seven days a week.Whenever I‘m feeling down, I can always go to Final Call Radio and be lifted up by the Teachings of The Most Honorable Elijah Muhammad through the Minister, so it‘s definitely impacted me in my day to day life.”

As a young man growing up in the Nation of Islam, Jair Muhammad said this platform is a step towards the future of the independence of Black people.

“Having an independent platform that we fully control, and it‘s the platform that the enemy can‘t take down because they aren‘t the ones that put it up. So to be able to have the words of the Minister that he’s spoken over six decades, and it‘s lectures that I‘ve never even heard before. And I‘m hearing things that are blowing my mind, but it‘s given me the desire and the will to want to study and get deeper into this work. This is what the enemy has tried so hard to keep away from us and this is something that they can‘t.”

Others who have been touched by Final Call Radio and Minister Farrakhan left comments under Ben X’s livestream.

Kristin Delores said, “Thanks Minister Louis Farrakhan for all your knowledge and information that’s shared throughout the world. I have grown in knowledge hearing and listening to you. I thank God for you.”

Ben Tsikwa from Zimbabwe commented, “Zimbabwe is watching, too.”

Claude Mobley said, “Honorable Minister Farrakhan you’re amazing, you did so much for Black people than anyone else, you’ve saved many lives also turned many lives around, well done.”

‘Keep it going, keep it growing’

With one year down and more to go, Final Call Radio has big plans for the future, including being able to go live, have radio shows and news reports, Mr. Saunders said. The ultimate goal, however, is to have truth overcome falsehood.

“When I think about the words of the Honorable Minister Louis Farrakhan, and how Islam would overcome all the religions though the polytheist may be averse. How is this truth going to outstrip eventually, all of the propaganda and allies that have been put out before the people have ever even heard the truth of what The Minister teaches?”

Mustapha Farrakhan said. “But we have to go through some things that this truth, the man that it emanates from that is still in the world, has to endure some things in the near future, and those of us with him, in order to establish this word globally. So I think that when this truth is heard globally, it absolutely speeds up the end of the world of Satan.”

With those goals in mind, The Final Call Radio team plans to follow the instructions of Minister Farrakhan––“keep it going … and keep it growing.”