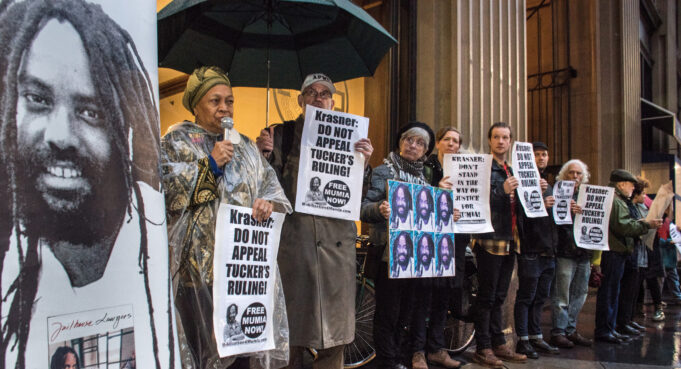 PHILADELPHIA—Advocates on behalf of political prisoner Mumia Abu-Jamal are not slowing down their efforts in working toward his release.

Social activist and writer for Workers World Betsy Piette told The Final Call this slow walking of Mumia’s appeals process could have only one end result—his death. For that reason, the focus for the movement to free the former Black Panther and journalist is calling for his compassionate release on medical grounds.

According to The Jamal Journal, an online publication, Mumia is suffering from Covid-19, congestive heart failure, liver cirrhosis, and a severe worsening of his chronic debilitating skin condition. His personal physician Dr. Ricardo Alvarez states, his only treatment is freedom.

Mumia, 66, is battling health problems while incarcerated at Mahanoy State Correctional Institution in Pennsylvania. He has served 40 years after being convicted of killing police officer Daniel Faulkner in 1981. He was sentenced to death in 1982. His death sentence was overturned, and a life sentence was imposed in 2011. He and his supporters have maintained he is innocent.

Philadelphia journalist Linn Washington, during an interview with The Final Call, pointed out a window of opportunity was opened for Mumia’s release in December 2018 when Judge Leon Tucker granted him the right to file a new appeal of all the evidence of judicial, prosecutorial, and police misconduct that the Pennsylvania Supreme Court had previously rejected from 1998-2012.

Following Judge Tucker’s landmark ruling on some evidence that advocates argued show Mumia’s innocence and entitlement to a new trial—which had been hidden away in a district attorney storeroom—more roadblocks were revealed.

On February 3 of this year Philadelphia District Attorney Larry Krasner, touted by many people as a “progressive” again blocked this pathway from the ruling about a new appeal to the Pennsylvania Superior Court. D.A. Krasner, in his brief, denied that the newly disclosed evidence of state misconduct from the six hidden boxes of Mumia’s prosecution files found two years ago are “material” and grounds for a new trial.

He argued the evidence against Mumia at trial was so overwhelming that it wouldn’t have made a difference to the jury that convicted him of first-degree murder and sentenced him to death.

“There’s institutional inertia against Mumia, and it goes from the police department through the district attorney up through the court system in Pennsylvania,” Mr. Washington said. “ I also think that Krasner has been getting some bad advice, and he’s made a political calculus that he doesn’t want to grant the relief that Mumia is entitled to. So, in this instance, the status quo is more important than fulfilling his persona as a reformer, as well as being consistent with supposedly the lawyer’s commitment to justice.”

According to Rachel Wolkenstein, a former attorney for Mumia Abu-Jamal and the Labor Action Committee to Free Mumia Abu-Jamal, D.A. Krasner’s response to Mumia’s appeal is an undeniable legal blow and has most likely blocked the judicial path to Mumia’s freedom. “To any who held out hope that Krasner would ‘do the right thing,’ Krasner had never given any indication that he questioned Mumia’s conviction, even when—after protest and pressure—he agreed not to oppose the appeal process,” she said.

“As District Attorney, Krasner had the legal authority and responsibility to review Mumia’s case and, as constitutionally warranted, to support overturning Mumia’s conviction because of due process violations and state misconduct,” she added.

According to Atty. Wolkenstein those due process violations included:

In court filings, Maureen Faulkner, wife of officer Faulkner, asked the Supreme Court to invoke its King’s Bench powers to disqualify D.A. Krasner’s office in the ongoing appeals and direct the state Attorney General’s Office to handle them. She has contended that Krasner’s office has conflicts of interest in defending against Mumia’s appeals. The Pennsylvania Supreme Court dismissed her petition in December 2020. This action delayed Mumia’s appeal for nearly a year.

She submitted a new request on March 17 with the Pennsylvania Superior Court to intervene, again seeking Krasner’s removal and asking the court to “quash this appeal as untimely” and “for lack of jurisdiction.”

“This is part of a decade-long effort of the FOP (Fraternal Order of Police) through Maureen Faulkner to block any relief from Mumia,” observed Mr. Washington.

Ms. Piette states, with Ms. Faulker’s reemergence, it’s hard to determine a time frame when the appeals process will move forward. “It’s the politics of it, and there’s never been justice for Mumia. Pretty much except (Judge) Tucker in 2018. And the one ruling that went in his favor to remove the death sentence and that took 11 years to get resolved,” she added

“That’s what their end game is. The state’s end game is to try to delay this case to the point that he’ll die in prison from medical neglect. The whole movement here is making the demand that the only solution is release. They’re not capable of giving him a fair trial, and they’re not capable of providing him adequate healthcare,” Ms. Piette surmised.

Pam Africa, coordinator for the International Concerned Family and Friends of Mumia Abu Jamal, told The Final Call during an interview that she believes his health conditions are the direct result of his unjust imprisonment and inadequate medical care incarcerated brothers and sisters receive.

“Mumia is innocent,” she said. “With all of this new information and delays, there is no way anybody can think that Mumia can have a fair trial,” she said. “The call must be to release Mumia! Release Mumia now!” she added.

“For people who think that you should accept the lesser evil, this is why we are in the condition we are in right now. That’s why the prisons are full of innocent people who are victims of the system. Martin Luther King said silence is a betrayal.”

Plans are underway, said Ms. Africa, to celebrate Mumia’s birthday during the weekend of April 24 with virtual meetings. “We plan a whole weekend of educating people and urging people to stay committed. We are also encouraging people to read The Jamal Journal published online for up-to-date information put out by Mumia and me.”