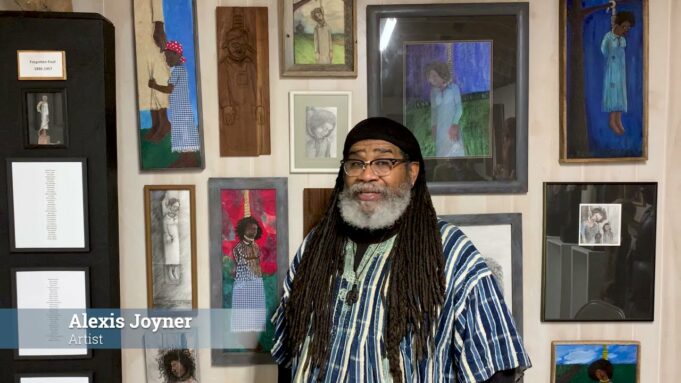 ELIZABETH CITY, Va. (AP)—History doesn’t show a kinship between Mary Turner and Nat Turner. They are certainly connected, though, when it comes to the artwork of Alexis Joyner.

He grew up with the ghosts of Nat Turner.

Joyner, 65, was born in Southampton County and played on the land where Turner and his band of insurgents killed their last targets during an 1831 slave rebellion. Turner was eventually caught, tried and hanged.

As famous as Nat Turner’s life and demise are, Joyner wants more people to know about women like Mary Turner.

The Georgia woman was eight months pregnant in 1918 when her husband was lynched by a White mob. She threatened to press charges against the men, and then was abducted herself. The men bound her feet and hanged her upside down from a tree branch. The mob then set her clothes on fire.

As the flames died, one man took a butcher’s knife to her middle and cut out the baby. It tumbled down and let out two cries before a man crushed its head with his shoe.

A few years ago, Joyner started creating art to remember women like Mary Turner, because “women are often sidelined,” he said. “In every sphere in history.”

Joyner’s “Forgotten Fruit” is a collection of wooden sculptures and paintings at the Arts of the Albemarle in Elizabeth City. It was on display through April 3, and remains online indefinitely through a virtual tour.

Historically, Black men were most often the victims of terror lynchings, according to a 2017 report by the Equal Justice Initiative in Montgomery, Alabama. The report studied “terror lynchings,” which became a rampant form of intimidation after the Civil War and the liberation of Blacks from slavery.

Blacks became the prey of lynch mobs if they were accused of a crime, committed a perceived slight against someone White or demanded changes, such as the right to vote. The report documents more than 4,400 cases of men, women and children who were killed between 1877 and 1950. The vast majority were men.

However, the 2019 report “An Analytical History of Black Female Lynchings in the United States, 1838-1969” sides with Joyner in pointing out that the murder of Black women often went unnoticed. It counted 188 confirmed cases and detailed how difficult it was to capture accurate numbers.

“Narratives on the victimization of Black women and girls through lynching violence are strikingly absent in historical studies,” it stated. “Scholars have noted that ‘most studies of racial violence have paid little attention to the particular suffering of Black women,’ and as a result, ‘racial violence against Black women has been little understood.’ ”

Joyner has spent the past four years creating 32 pieces to get the public to understand it.

The lynch mobs didn’t care if the women were young or elderly. One of Joyner’s paintings illustrates a gray-haired woman hanging from a noose, her eyes still open and blank, her tongue protruding.

One carving is of African mahogany and is in the shape of a woman. On one side, her skirt shows a little girl playing on a tire swing. On the reverse of the carving, a woman sways from the same limb.

One painting shows the lifeless legs and arm of a woman while her two children stare at their mother’s blood-stained green dress. The smaller girl clutches a White doll.

Joyner said it speaks to how Black women, even though degraded and beaten beyond the lynchings, were still expected to raise and care for White people.

“It’s kind of like mammies-in-training in a sense,” he said. “I mean, we’re being beaten down and beaten down, yet we’re nurturing.”

The museum has posted a content advisory because of the graphic nature of the show, but its executive director believes it is a necessary exhibition.

“It is so important to tell the stories of these lynched Black women whose voices were silenced,” said Laurie Edwards, the executive director, in an email. “We’re very grateful to Mr. Joyner for trusting us to exhibit his thought-provoking work, especially now.”

Joyner, who now lives in Elizabeth City, started drawing as a child and never stopped. He taught art for decades until retiring a few years ago. He’d grown up with Nat Turner stories, fact and fiction, and around 2016 he started thinking about one that he heard from a friend way back when.

The man said Turner’s group of rebels included a few women. Once caught, one woman was tied to a wagon wheel, tortured and killed.

Joyner doesn’t know if the story is true, but it prompted him to start researching the lynching of women.

One of the sculptures in his show is a tall, wooden obelisk that shoots up like a tree. Its “trunk” displays various windowpanes that contain the names of women who’ve died from mob violence.

The title of the show came pretty easily to Joyner. It is derived from the song “Strange Fruit,” which was first popularized in the 1930s by jazz singer Billie Holiday. It was blatant in its anti-lynching message. Its first few lines are haunting:

The Oscar-nominated movie “The United States vs. Billie Holiday” is about the government’s attempt to stop Holiday from performing the song.

Joyner’s show first opened in February but has been so popular that the museum extended its run.

“I’m shocked and excited,” Joyner said. He wanted to honor women whose deaths were neglected but who were often killed for protecting their families or speaking out against injustices.

“I just hope that the audience sees my feeble attempt of showing my respect for the courage and the spirit of these African American sheroes.”