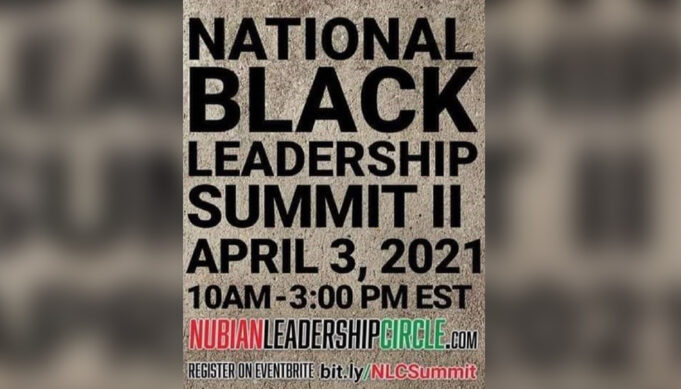 “Pursuing the Creation of Our Own Black Nation” is the working theme for the April 3 gathering which is expected to garner strong participation. The organizers said 260,000 people viewed the previous online event last December which indicated an interest in information, change and moving forward.

“It is absolutely necessary to bring the thought leaders together and bring their experience and insight and their wisdom,” said veteran broadcaster Bob Law, a co-facilitator of the summit.

The longtime media voice believes the summit can be a space where those who have “wisdom” and “insight in our community can express and work.”

“We have to tap into that genius,” said Mr. Law.

The summit is a continuation and follow-up to a major meeting of leaders and change agents who met in December 2020. The Black Leadership Summit II was planned soon after the first one at the recommendation of Minister Farrakhan who suggested they should be convened every three months.

The first summit was introductory to facilitate unity, build a common base of operations and develop a blueprint that individual organizations can use moving forward, but with collective Nubian Leadership Circle support. The goal is for groups to organize and convene their own summits in their own cities, said organizers.

“We want folks to be aware of the infrastructure of the Nubian Leadership Circle … so that in the very near future we’ll be putting out this blueprint all across the country,” said Sadiki Kambon, the summit convenor.

Mr. Kambon said the continuation of the summits is to change the belief permeating the Black community that it is in a near hopeless condition, as a victim without resources to remedy their situation.

“We’d like to be able to promote a different viewpoint,” Mr. Kambon told The Final Call. “Our being the Original people and how creative we are; that we have the mindset, the brains and resources to turn our situation around if we look inwardly as it pertains to what we need to do for us,” he said.

The organizers intend the April 3 summit to represent the “next step up” to action by the leadership alliance. “This time when they come out of their cadres to in fact report …we want them to include a working project,” said Mr. Kambon.

The goal, he explained is that in between summits the various cadres will be working jointly on projects. Ideas that were agreed upon in the first summit have been “fine-tuned” to be formulated  into action plans in the second summit, added Rodney Muhammad, co-facilitator, and Nation of Islam student minister in  Cambridge, Massachusetts.Mr. Muhammad said his cadre, Spiritual Renewal, like the others was to gather the best ideas from the participants and organize them into strategy toward implementation.

Holding summits was born out of the former National African American Leadership Summit (NAALS),  which began convening leaders and organizations in nationwide meetings during the 1990s. The idea was conceived by Minister Farrakhan’s desire to pull Black organizational leaders and critical thinkers together to work out solutions to the myriad of issues affecting Black life in America.

With the help of then NAACP heads Dr. Benjamin Chavis and Attorney Lewis Myers, the summits began to be held under the auspices of the NAACP. The NAACP hosted Black organizations, Black leaders, historians and thinkers in June 1994 and out of that meeting the National African American Leadership Summit was established.

Mr. Muhammad told The Final Call, Minister Farrakhan is “excited” over the Nubian Leadership Circle’s reviving the efforts that began with NAALS.  “The enemy is angry and thought that he buried the unity that, that produced,” he said. “Now this is reviving that unity,” he added.

Mr. Muhammad also noted it is ironic the summit reconvenes April 3, one day before the anniversary of the assassination of Dr. Martin Luther King Jr. on April 4, 1968. “That says a lot; that our leadership will not die in vain,” he stated.

The Nubian Leadership Circle mission is to function as an alliance of Afrikan/Black local organizations and leaders with an identifiable constituency, having local, regional, national, and international implications.

The Nubian Leadership Circle’s goal is to “build Umoja (Unity)” among the organizations and “provide a structure and power base” that protects and defends our rights, said the group’s website. “We welcome those joining us for the upcoming Summit II,” said organizers.

First time registrants should select their “cadre” of choice. Those who attended “Summit I” in December are encouraged to re-enroll as participants in their same “cadre” to assure continuity in developing respective “work projects” in moving forward.

For more information and to register for the Black Leadership Summit II, visit