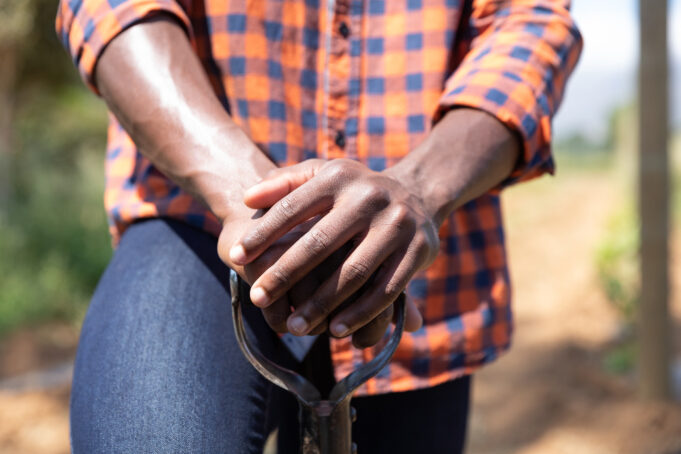 WASHINGTON—Celebrations have begun over a provision in President Joe Biden’s recently enacted $1.9 trillion Covid-19 relief bill which aims to address decades of discrimination against Black farmers who have historically been victims of unfair treatment in government agricultural programs.

The American Rescue Plan sets aside $10.4 billion for agriculture support, with about half of that amount set aside for non-White farmers, and it allocates extra federal funds to farmers who were “subjected to racial or ethnic prejudice because of their identity as members of a group.”

“This is a huge victory for Black farmers and farmers of color,” John Boyd, a fourth-generation farmer and president of the National Black Farm Association said recently. But Republican opponents of any and all Black progress attacked the provision, while another veteran in the fight for equality declares the measure only a “partial victory.”

“There’s no reason for a victory lap about this issue of discrimination at USDA (the U.S. Department of Agriculture), because the discrimination at USDA has not stopped,” Lawrence Lucas founder and president emeritus of the USDA Employees Association told The Final Call. “It has not stopped. And we’ve got class actions and women class actions that have not been resolved.

At the same time a complaint was lodged by Sen. Lindsay Graham (R-S.C.) who called the $5 billion payments set aside for Black farmers “reparations” since White farmers don’t get any of that specific aid money.

Sen. Graham criticized what he called the Democratic “wish list” in the stimulus deal. “Let me give you an example of something that really bothers me,” Sen. Graham said in an interview with Fox News. “In this bill, if you’re a farmer, your loan will be forgiven up to 120 percent of your loan … if you’re socially disadvantaged, if you’re African American, some other minority. But if you’re [a] white person, if you’re a white woman, no forgiveness. That’s reparations. What does that have to do with Covid?” he asked. Never mind that 97 percent of the record $46.2 billion in 2020 agricultural subsidies went to Whites.

The American Rescue Plan has allotted $10.4 billion for agriculture and around half of it would go to disadvantaged farmers, The Washington Post reported, citing estimates from the Farm Bureau. Around a quarter of disadvantaged farmers are Black and the funds would go toward grants, debt relief, education, training and other assistance.

“The history of USDA, unfortunately, involved a level of discrimination against a number of minority producers—Black farmers, Native American farmers, Hispanic farmers,” Agriculture Department secretary Tom Vilsack said after the bill was signed. “And there is an effort, I think, with this package to try to deal not with the specific acts of discrimination, but the cumulative effect over a period of time.

When people are discriminated against, they basically get behind, and it’s really hard for them ever to catch up. And the result, of course, is that we’ve seen a significant decline in the number of minority producers around the country. So, this is providing some debt relief for those minority producers, those socially disadvantaged producers, to impact and affect the cumulative effect of—to offset the cumulative effect of discrimination over a period of time,” he said.

But Blacks in agriculture are suspicious because Tom Vilsack disappointed many Black farmers who found him to be insensitive to their concerns during his previous tenure in the same position during the Obama administration.

“I have not seen any evidence that tells me that Tom Vilsack is going to do the job that should have been done that’s going to carry out all the issues that are in the Justice for Black Farmers Act,” said Mr. Lucas. The Justice for Black Farmers Act was proposed in this legislative session by Sen. Cory Booker (D-N.J.), and is supported by newly elected Sen. Raphael Warnock (D-Ga.), both of whom are members of the Senate Agriculture Committee.

“Many of the issues in the Justice for Black Farmers Act, Tom Vilsack as Secretary of Agriculture can do himself, by making certain changes and putting certain initiatives and policies in place,” Mr. Lucas continued.

Another troubling problem is the drastic loss of Black-owned farmland. Black farmers have lost more than 12 million acres of land in the U.S. in the past century as a result of “systemic racism, biased government policy and social and business practices that have denied African Americans equitable access to markets,” The Washington Post reported. In the 1970s organizations, including the now-defunct Emergency Land Fund (ELF) were formed to help Blacks maintain farmland ownership.

“Yes. And at the turn of the century, we were tilling about 20 million acres of land, primarily in the Southeastern Corridor of the United States, and we were close to one million Black farm families strong,” Mr. Boyd said in an interview with Democracy Now! “And for those who don’t understand the history, every Black person in this country, we’re one or two generations away from somebody’s farm.

“That is the first time that anybody has been willing to give back the land,” said Mr. Lucas. “And you must remember, when they took away the land, what they did is they took away a way of life. They also took away the wealth that would be generated by many generations to come, was taken away from Black farmers.

But there is relief at hand, Mr. Lucas said. “What is going on with the Warnock bill and what is going on with the Justice for Black Farmers Act, this is the greatest thing since the 1964 Civil Rights Act. It is the best thing that’s ever been done to do something to show that this country is willing to now say, ‘We’re willing to fix this problem as best we can now.’ ”